Enhancement and Future Development of ALMA for the 2020s and 2030s

In 2021, ALMA celebrated the 10th anniversary of its Early Science operations. During this time, the telescope has produced many achievements on a variety of scientific fields, including the birth of planets, the early evolution of galaxies, and the search for organic molecules in the Universe. Against the backdrop of these achievements of ALMA and the progress of astronomy as a whole, the National Astronomical Observatory of Japan (NAOJ) and ALMA partners started discussions with scientific communities in Japan and overseas regarding the next scientific goals to be tackled in the 2020s and 2030s and the functional enhancement of ALMA necessary for achieving the identified goals. The outcomes are summarized in the ALMA Development Roadmap and the plan to enhance the capabilities of ALMA while continuing its scientific operations is called the “ALMA 2” project in Japan. 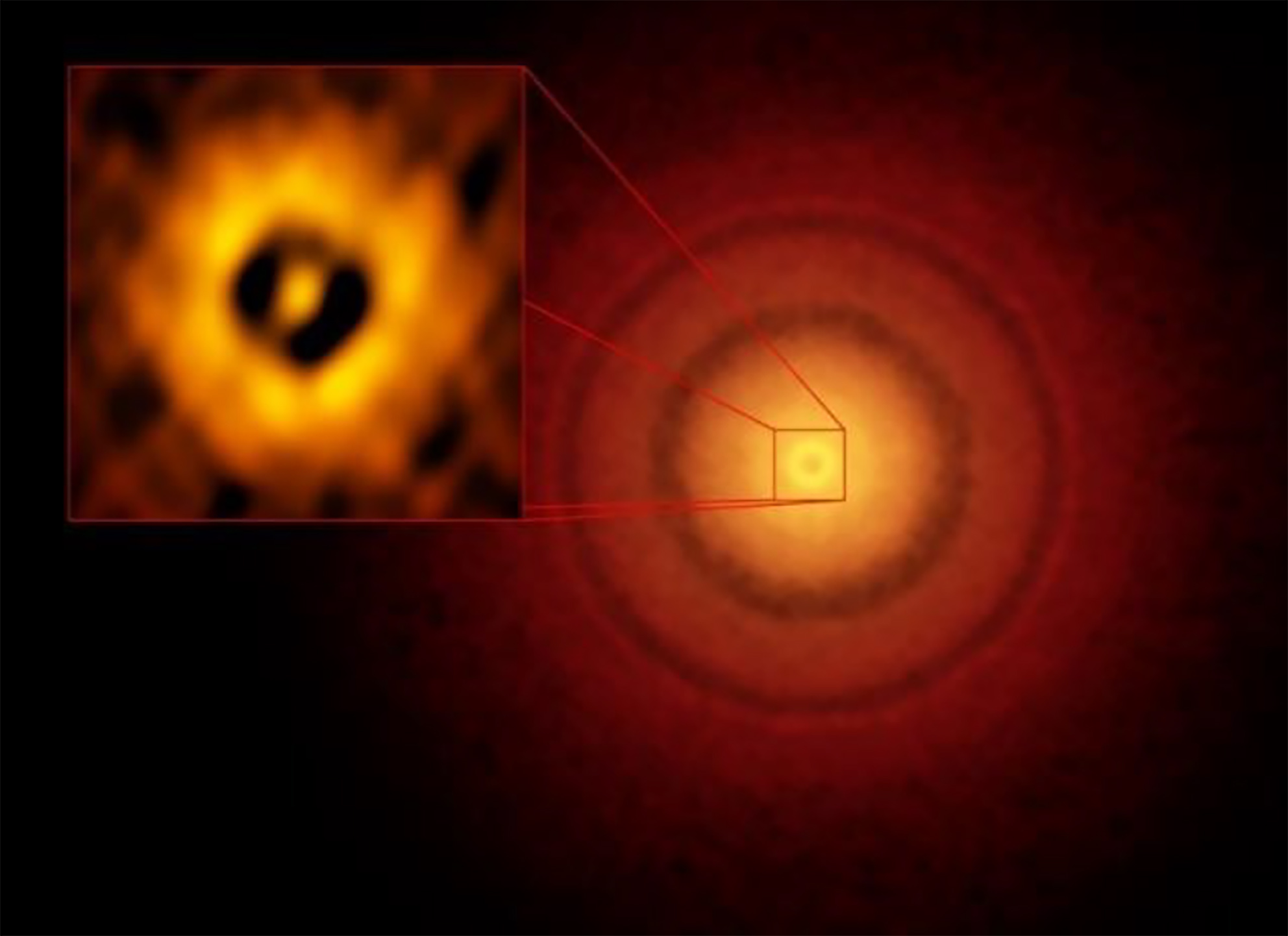 A dust disk around the young star TW Hydrae observed by ALMA. The enlarged view of the center shows the gap on the scale of the Earth’s orbit. TW Hydrae is the star closest to the Earth (175 light years) with a known protoplanetary disk. By improving the resolution of ALMA, we will aim to unveil the structure on the scale of the Earth’s orbit in many protoplanetary disks located further than TW Hydrae.
Credit: S. Andrews (Harvard-Smithsonian CfA), ALMA (ESO/NAOJ/NRAO)

Scientific Goal 2: Making dramatic progress in understanding molecular building blocks of life in planet forming regions
ALMA has succeeded in detecting organic molecules such as methanol around protostars and in protoplanetary disks. The ALMA 2 project aims to clarify the distribution and evolution of biomaterials in protoplanetary disks, not just the detection of organic molecules, by improving the resolution and sensitivity. In addition, ALMA 2 will explore the origin of water by clarifying the deuterium abundance and its spatial distribution in disks. In combination with the search for water and organic molecules on primordial bodies in the Solar System conducted by Hayabusa2 and other spacecrafts, and the search for signs of life in exoplanet atmospheres using visible-infrared observations, providing fundamental knowledge for the ultimate human challenge of understanding life in the Universe is one of the major goals of ALMA 2. 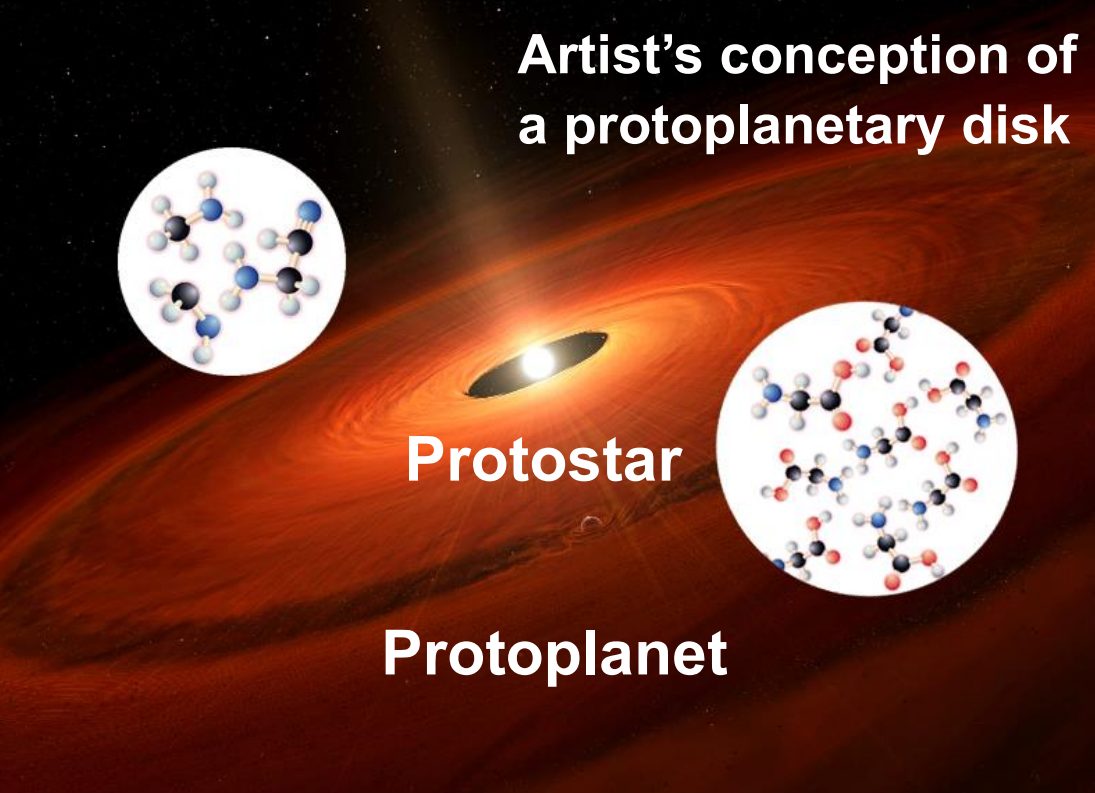 Scientific Goal 3: Searching for the starting point of nucleosynthesis in the Universe

ALMA has detected oxygen at the Universe age of 500 million years old. This suggests that the formation of the first star could be 200 million years earlier than that. This result shows that the oxygen emission line is a promising new probe in exploration of the early Universe,
and that the Universe age of 300 million years old (redshift z = 15) is an extremely important period in the history of galaxy formation. ALMA 2 aims to directly detect galaxies in this era by enhancing the detection efficiency of distant galaxies by more than an order of magnitude with improved sensitivity and expanded instantaneous detection frequency range. More specifically, the goal of ALMA 2 is to identify the starting point of the nucleosynthesis by directly capturing the oxygen released by supernova explosions of the first-generation stars, which is supposed to have occurred about 300 million years after the birth of the Universe, and to accurately determine the time of the first star formation.

To achieve these scientific goals, the ALMA 2 project will improve the sensitivity of ALMA by about twice, the angular resolution by more than twice, and extend the frequency band that can be observed simultaneously by more than twice compared to ALMA’s current capabilities. This performance will be improved by upgrading the receivers mounted on the antennas and the correlator for data processing while utilizing the present ALMA antennas and facilities. The NAOJ Advanced Technology Center has already succeeded in demonstrating the high-sensitivity, wideband receiver technologies required for the ALMA 2 project (Note: Please refer the press release “New Radio Receiver Opens Wider Window to Radio Universe” issued on July 8, 2021). In the development towards higher resolution, tests have demonstrated the feasibility of future observations with resolution close to the ALMA 2 target.

Receiving strong support not only from astronomy but also from a wide range of academic communities, the ALMA 2 project was recommended as a priority large-scale research project in the “24th Master Plan for Large-Scale Research Project (Master Plan 2020)” by the Science Council of Japan. The ALMA 2 project has been subsequently included in the “Formulation of Basic Concept Roadmap for Promotion of Large-Scale Research Projects −Roadmap 2020−” published by the Ministry of Education, Culture, Sports, Science and Technology (MEXT) emphasizing the priority of the proposed large-scale project, based on the support from the academic communities.

ALMA is jointly operated in global partnership, and its enhancement plan has been supported by scientific communities around the world. The plan for the performance enhancement of ALMA was discussed on various occasions at international working groups consisting of
representatives of the scientific communities, the ALMA Scientific Advisory Committee, and workshops in which many researchers participated. As a result, consensus was achieved concerning the scientific goals, development items and the priorities. The results are summarized in the ALMA Development Roadmap. The ALMA2 project in Japan is fully aligned with this Roadmap.

Alvaro Gonzalez, NAOJ ALMA Project Manager, said, “ALMA 2 will represent the second phase of the ALMA Project in Japan, when ALMA will be upgraded towards new and exciting science goals, at the same time as we continue regular operations so the community can continue to carry out groundbreaking scientific projects. We are very glad that the Project has been included in the prestigious Roadmap 2020 by MEXT. We will continue trying to do our best to serve the Japanese community, to increase the telescope performance and capabilities, and to maintain its high productivity under the new framework of the ALMA 2 project”. We appreciate your continued support for ALMA and the ALMA 2 project.