The origin of the cosmic explosion “AT2018cow” discovered on June 16, 2018 is still controversial; it could have originated from a tidal disruption or from a stellar explosion. A team of researchers tackled this mystery by utilizing the ALMA Director’s Discretionary Time (DDT) for ALMA polarimetry observations during two epochs (11 and 17 days after the discovery) plus coincident photometry by the Morita Array. Although polarization observation is one of the special modes of ALMA, the team prepared the observing plan soon after the discovery of AT2018cow based on their experiences observing Gamma-Ray Bursts with ALMA.
share
tweet 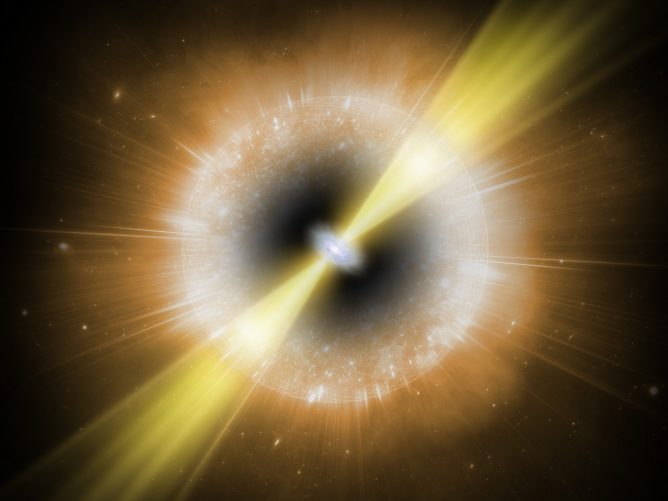 One possible scenario for this mysterious blast is that AT2018cow’s progenitor was similar to those of other stellar explosions but was surrounded by a large amount of material before its explosion. In this scenario, the explosion produced relativistic jets with synchrotron emission and also generated polarized light. The team successfully confirmed the characterized peak frequency caused by the synchrotron emission. But surprisingly, the ALMA polarimetry did not detect the expected polarized light from AT2018cow.

The research team interpreted this to mean that the dense surrounding material and strong magnetic field played important roles in suppressing the polarization. Under these conditions, the Faraday rotation effect, which is an interaction between light and a magnetic field in a medium, is strong. The synchrotron emissions from different parts in the relativistic jets have different Faraday rotation effects, which lead to suppression of the net polarization.

The research team emphasized that these ALMA observations establish a specific method for multi-messenger astronomy (observations of differing signals, such as electromagnetic radiation, gravitational waves, neutrinos, or cosmic rays) with this kind of transients. Based on their 230 GHz observations, the maximum energy of the accelerated particles reached at least GeV level. Since observations at higher frequencies are key to estimating the lower limit for the maximum energy of the particles, ALMA polarimetry at a higher frequency (i.e. ~THz) could examine whether AT2018cow-like objects are the origin of PeV cosmic rays. The origin of cosmic rays is still a crucial issue in high-energy astrophysics.