ALMA captured this image of the bright star Betelgeuse in the constellation Orion at an ultra-high resolution which exceeds 80000/20 vision in terms of eyesight. Betelgeuse is a red supergiant star in the final stage of its life. It has swelled up to about 1400 times bigger than the Sun. In the image taken by ALMA, the radio waves are stronger on a part of the star’s surface (the white part in the image), and it turned out that that part was about 1000 degrees Celsius hotter than its surroundings. Also on the left side of the image, a slightly swollen structure can be seen.
share
tweet

Investigating the Surface of a Star with Extremely High-resolution Observations

The stars visible in the night sky are located very far away. Even if you look at the stars with a telescope, you usually can only see them as dots. However, Betelgeuse is located relatively close at 500 light-years from the Earth, and it has expanded to 1400 times as big as the Sun, which is about the same size as Jupiter’s orbit in the Solar System. So, it is one of the few stars where we can investigate the surface pattern with extremely high-resolution observations.

ALMA captured radio waves radiated slightly above the photosphere, the surface of Betelgeuse which you can see with visible light. The average temperature estimated from the radio intensity is about 2500 degrees Celsius. Since Betelgeuse’s photosphere is about 3400 degrees Celsius, we can say that the temperature of the upper atmosphere is about 1000 degrees Celsius colder than the surface of the photosphere. On the other hand, as shown in the image, some regions captured by ALMA are hotter than the surroundings. Researchers think that this is due to a convection phenomenon in which high temperature matter comes up from inside Betelgeuse. Observing Betelgeuse in extremely high-resolution gives us a clue to understand what is happening inside the giant star at the end of its life. 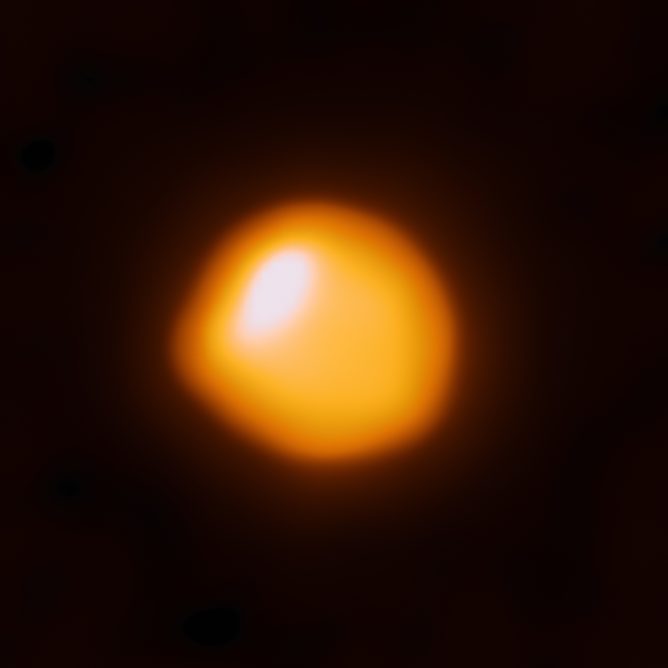