ALMA is Almost Ready to Start a New Observation Cycle

The next observation cycle of the Atacama Large Millimeter/submillimeter Array (ALMA), Cycle 6, is the most demanded one to date, with proposals for more than 19,000 hours. A five months long process is coming to an end after ALMA notified the results of the review process of proposals by more than 1,200 astronomers. Cycle 6 is in its finals adjustments to be ready to start next October and hits a new oversubscription rate record of 4.9.

The ALMA Review Panel (ARP) met during the third week of June in Tokyo, Japan, to analyze the record number of observation proposals received last March (1836), gathering 146 experts from 20 countries (34% from Europe, 30% from North America, 22% from East Asia, 10% from Chile and 4% from other regions). In the quest for gender equality more than 40% of the reviewers were women.

“We are very grateful of the great work done by experts coming from all over the world in a effort to gather and review the enormous quantity of proposals received”, explains John Carpenter, ALMA Observatory Scientist. “The reviewers play an essential role to select the science that will be carried out by ALMA in the upcoming year.” 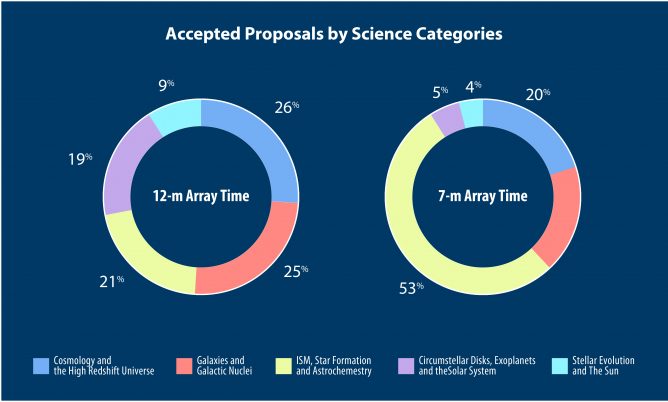 For the 12-m array, the category that had the most time accepted was Cosmology & High Redshift Universe (26%), while for the 7-m array it was Interstellar Medium, Star Formation & Astrochemistry (53%).

The regional distribution of the observation time for the 12-meter array is 33% Europe, 34% North America, 22% East Asia and 10% Chile. One per cent was destined to other regios. 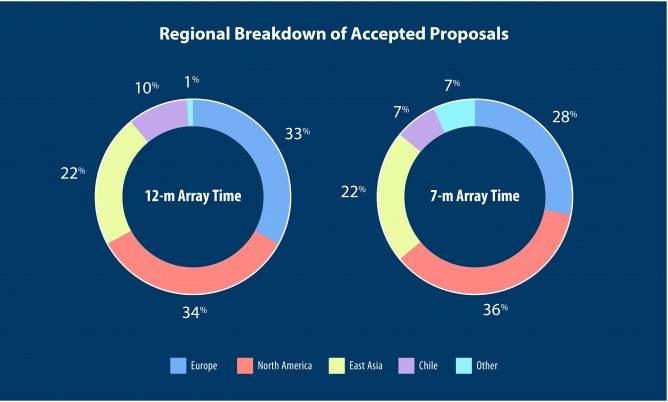 The proposals selected will have access to 66 ALMA antennas to search the Universe – fifty 12-meter antennas and twelve 7-meter antennas, and four 12-m antennas for total power – in addition to bands 3, 4, 5, 6, 7, 8, 9 and 10. Cycle 6 will bring to ALMA several new observational capabilities, including full circular polarization observations, Band 8 stand-alone ACA observations and an increase of the Band 6 Intermediate Frequency bandwidth – from 5 to 5.5 GHz- to improve the flexibility to observe multiple spectral lines simultaneously.

Astronomers are now making the selected proposals ready for observation, so they can be scheduled from October 1, 2018, until September 30, 2019.