TOP
News
Rarest form of CO Provides Hint to the Birth of Planets around Youn ...

Astronomers have discovered the rarest stable carbon monoxide isotope molecule, 13C17O, in the dust and gas disk around a young star using ALMA for the first time. The observations indicate that the disk is more massive than previous estimates, and they may provide an important key to solve mysteries about the planet formation processes in disks.
share
tweet 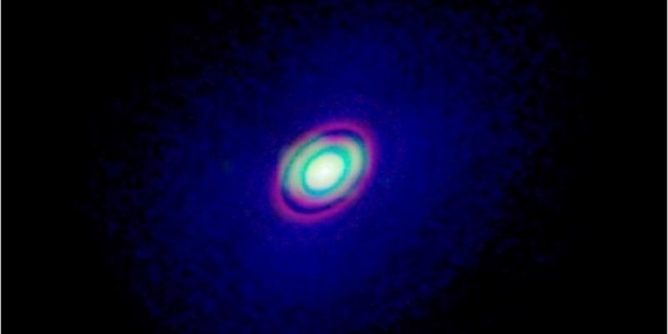 The young star, named HD 163296, is located 330 light-years away in the constellation Sagittarius. It is surrounded by a disk of dust and gas – a so-called protoplanetary disk, in which young planets are forming. This disk has multiple ring and gap patterns which are thought to be sub-structures induced by new-born large planets. (https://alma-telescope.jp/en/news/dsharp-201812)
Using the Atacama Large Millimeter/submillimeter Array (ALMA) in the Atacama Desert, Chile, researchers detected an extremely faint signal showing the existence of 13C17O, a rare carbon monoxide isotopologue, that is to say a molecule containing one or more isotopes.

The detection has allowed scientists to measure the mass of the gas in the disk more accurately than before. The results show that the disk is much heavier – or more ‘massive’ – than previously thought. 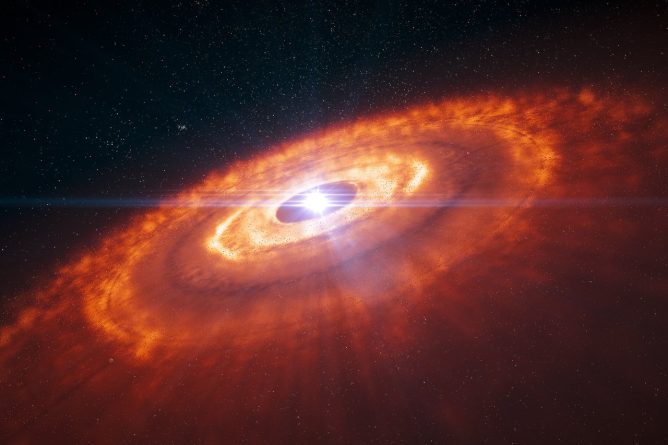 An artist’s impression of planets forming in the ring of gas and dust surrounding a star.
Credit; ESO/ L. Calçada

Alice Booth, a PhD student in the School of Physics and Astronomy, University of Leeds who led the study, said: “Our new observations showed there was between two and six times more mass hiding in the disk than previous observations could measure. This is an important finding in terms of the birth of planetary systems in disks – if they contain more gas, then they have more building material to form more massive planets.”

This group’s conclusions are well timed. Recent observations of protoplanetary disks have perplexed astronomers because the disks did not seem to contain enough gas and dust to create the planets observed.

Dr. John Ilee, a researcher at University of Leeds who was also involved in the study, added: “The disk-exoplanet mass discrepancy raises serious questions about how and when planets are formed. However, if other disks are hiding similar amounts of mass as HD 163296, then we may just have underestimated their masses until now.”

Disk gas masses are usually estimated by observing common forms of carbon monoxide (CO). This molecule is the most useful to determine disk gas mass, since it is abundant and is much easier to observe in cold disks than hydrogen molecules. However the fact that CO is abundant can also become a problem. If the disks are sufficiently dense, however, then the outermost CO molecules start to block part of the emissions from CO molecules deeper within the disk – and that could result in scientists underestimating the total mass of the gas.

In this study, the scientists targeted the much rarer 13C17O molecule. Because it is rarer, there is less self-blocking, so that the observers could peer deeper inside the disk and find previously hidden gas.

The scientists expect that using ALMA, they can observe this rare form of CO in many other disks. Dr. Shota Notsu, a JSPS Overseas Research Fellow in Leiden Observatory, Leiden University who was also involved in this study, said: “Measuring the accurate disk masses is key to understand processes of planet formation. Future studies using the rarest forms of CO will enable us to measure the missing mass in many more protoplanetary disks and determine their planet-forming potential.”

Related Press Releases
“The rare molecule weighing in on the birth of planets”
http://www.leeds.ac.uk/news/article/4469/the_rare_molecule_weighing_in_on_the_birth_of_planets

Paper and the Research Team
These observation results were published as Booth et al. “The first detection of 13C17O in a protoplanetary disk: a robust tracer of disk gas mass” in the Astrophysical Journal Letters on September 12, 2019.
https://iopscience.iop.org/article/10.3847/2041-8213/ab3645

This research was supported by MEXT/JSPS KAKENHI (No. 16J06887, 17K05399, 19K03910), STFC (ST/R000549/1), and JSPS Overseas Research Fellowships.
The Atacama Large Millimeter/submillimeter Array (ALMA), an international astronomy facility, is a partnership of the European Organisation for Astronomical Research in the Southern Hemisphere (ESO), the U.S. National Science Foundation (NSF) and the National Institutes of Natural Sciences (NINS) of Japan in cooperation with the Republic of Chile. ALMA is funded by ESO on behalf of its Member States, by NSF in cooperation with the National Research Council of Canada (NRC) and the Ministry of Science and Technology (MOST) and by NINS in cooperation with the Academia Sinica (AS) in Taiwan and the Korea Astronomy and Space Science Institute (KASI). ALMA construction and operations are led by ESO on behalf of its Member States; by the National Radio Astronomy Observatory (NRAO), managed by Associated Universities, Inc. (AUI), on behalf of North America; and by the National Astronomical Observatory of Japan (NAOJ) on behalf of East Asia. The Joint ALMA Observatory (JAO) provides the unified leadership and management of the construction, commissioning and operation of ALMA.