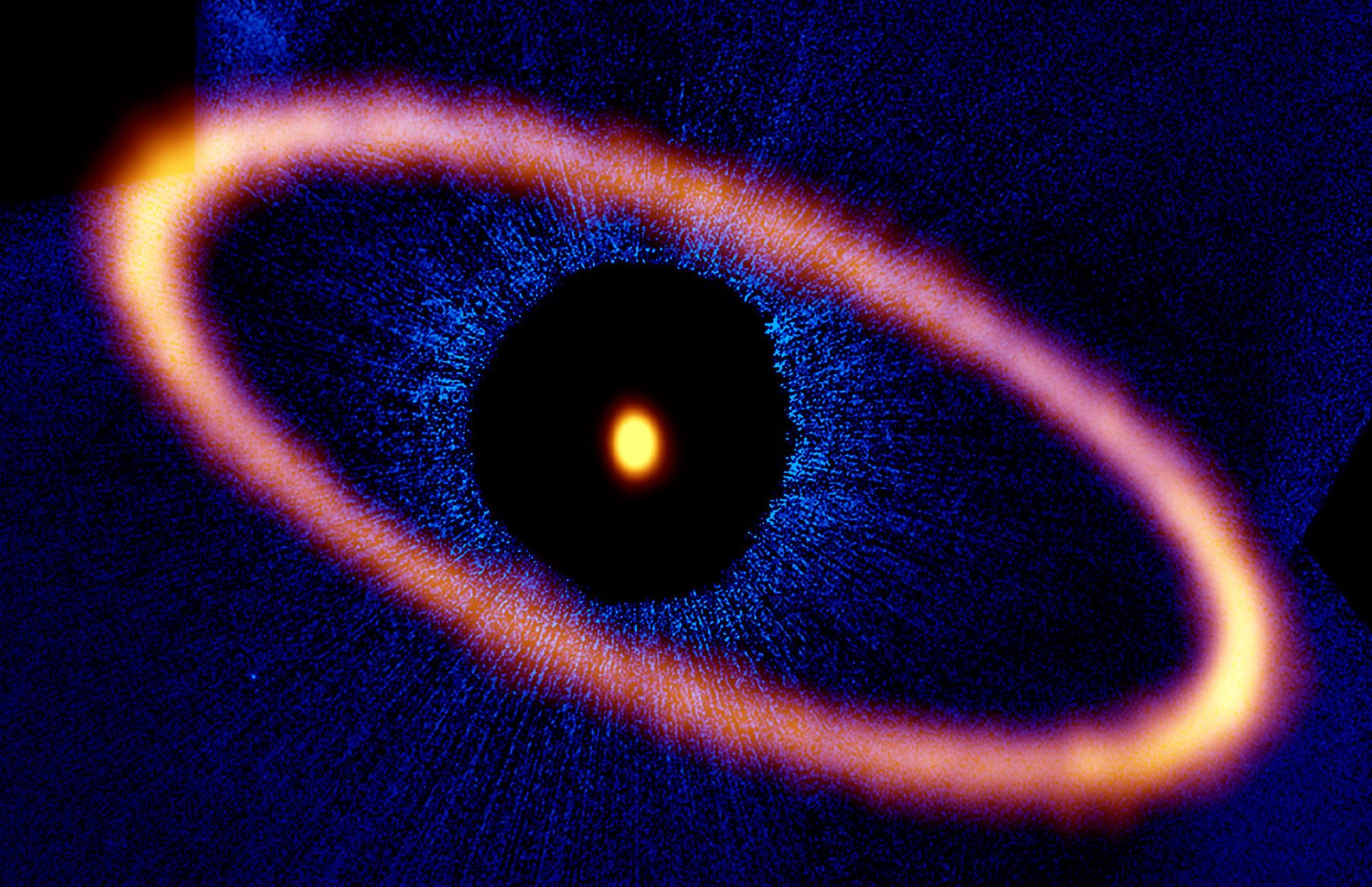 An international team of astronomers using the Atacama Large Millimeter/submillimeter Array (ALMA) has made the first complete millimeter-wavelength image of the ring of dusty debris surrounding the young star Fomalhaut. This remarkably well-defined band of rubble and gas is likely the result of exocomets smashing together near the outer edges of a planetary system 25 light-years from Earth. 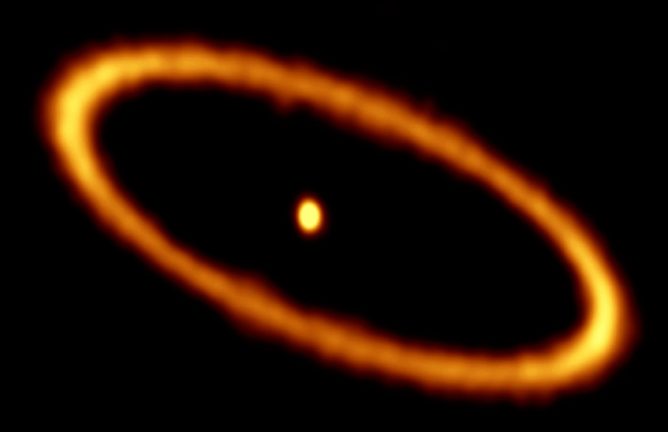 ALMA image of the debris disk in the Fomalhaut star system. The ring is approximately 20 billion kilometers from the central star and about 2 billion kilometers wide. The central dot is the unresolved emission from the star, which is about twice the mass of our sun.
Credit: ALMA (ESO/NAOJ/NRAO); M. MacGregor

Earlier ALMA observations of Fomalhaut — taken in 2012 when the telescope was still under construction – revealed only about one half of the debris disk. Though this first image was merely a test of ALMA’s initial capabilities, it nonetheless provided tantalizing hints about the nature and possible origin of the disk.

The new ALMA observations offer a stunningly complete view of this glowing band of debris and also suggest that there are chemical similarities between its icy contents and comets in our own solar system.

“ALMA has given us this staggeringly clear image of a fully formed debris disk,” said Meredith MacGregor, an astronomer at the Harvard-Smithsonian Center for Astrophysics in Cambridge, Mass., and lead author on one of two papers accepted for publication in the Astrophysical Journal describing these observations. “We can finally see the well-defined shape of the disk, which may tell us a great deal about the underlying planetary system responsible for its highly distinctive appearance.”

Fomalhaut is a relatively nearby star system and one of only about 20 in which planets have been imaged directly. The entire system is approximately 440 million years old, or about one-tenth the age of our solar system. 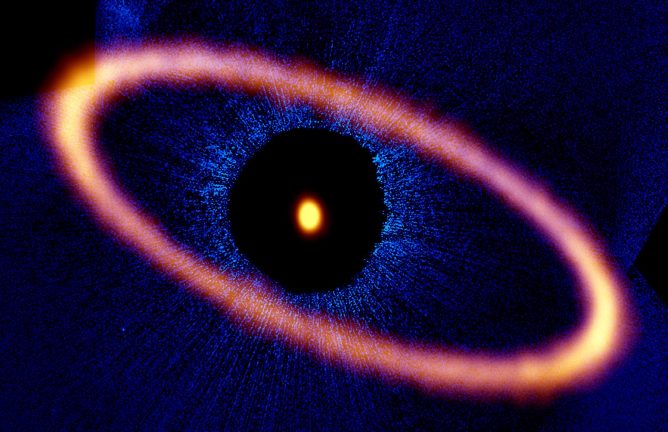 Composite image of the Fomalhaut star system. The ALMA data, shown in orange, reveal the distant and eccentric debris disk in never-before-seen detail. The central dot is the unresolved emission from the star, which is about twice the mass of our sun. Optical data from the Hubble Space Telescope is in blue; the dark region is a coronagraphic mask, which filtered out the otherwise overwhelming light of the central star.
Credit: ALMA (ESO/NAOJ/NRAO), M. MacGregor; NASA/ESA Hubble, P. Kalas; B. Saxton (NRAO/AUI/NSF)

Debris disks are common features around young stars and represent a very dynamic and chaotic period in the history of a solar system. Astronomers believe they are formed by the ongoing collisions of comets and other planetesimals in the outer reaches of a recently formed planetary system. The leftover debris from these collisions absorbs light from its central star and reradiates that energy as a faint millimeter-wavelength glow that can be studied with ALMA.

Using the new ALMA data and detailed computer modeling, the researchers were able to calculate the precise location, width, and geometry of the disk. These parameters confirm that such a narrow ring is likely produced through the gravitational influence of planets in the system, noted MacGregor.

The new ALMA observations are also the first to definitively show “apocenter glow,” a phenomenon predicted in a 2016 paper by Margaret Pan, a scientist at the Massachusetts Institute of Technology in Cambridge, who is also a co-author on the new ALMA papers. Like all objects with elongated orbits, the dusty material in the Fomalhaut disk travels more slowly when it is farthest from the star. As the dust slows down, it piles up, forming denser concentrations in the more distant portions of the disk. These dense regions can be seen by ALMA as brighter millimeter-wavelength emission.

Using the same ALMA dataset, but focusing on distinct millimeter-wavelength signals naturally emitted by molecules in space, the researchers also detected vast stores of carbon monoxide gas in precisely the same location as the debris disk.

“These data allowed us to determine that the relative abundance of carbon monoxide plus carbon dioxide around Fomalhaut is about the same as found in comets in our own solar system,” said Luca Matrà with the University of Cambridge, UK, and lead author on the team’s second paper. “This chemical kinship may indicate a similarity in comet formation conditions between the outer reaches of this planetary system and our own.” Matrà and his colleagues believe this gas is either released from continuous comet collisions or the result of a single, large impact between supercomets hundreds of times more massive than Hale-Bopp.

The presence of this well-defined debris disk around Fomalhaut, along with its curiously familiar chemistry, may indicate that this system is undergoing its own version of the Late Heavy Bombardment, a period approximately 4 billion years ago when the Earth and other planets were routinely struck by swarms of asteroids and comets left over from the formation of our solar system.

“Twenty years ago, the best millimeter-wavelength telescopes gave the first fuzzy maps of sand grains orbiting Fomalhaut. Now with ALMA’s full capabilities the entire ring of material has been imaged,” concluded Paul Kalas, an astronomer at the University of California at Berkeley and principal investigator on these observations. “One day we hope to detect the planets that influence the orbits of these grains.” 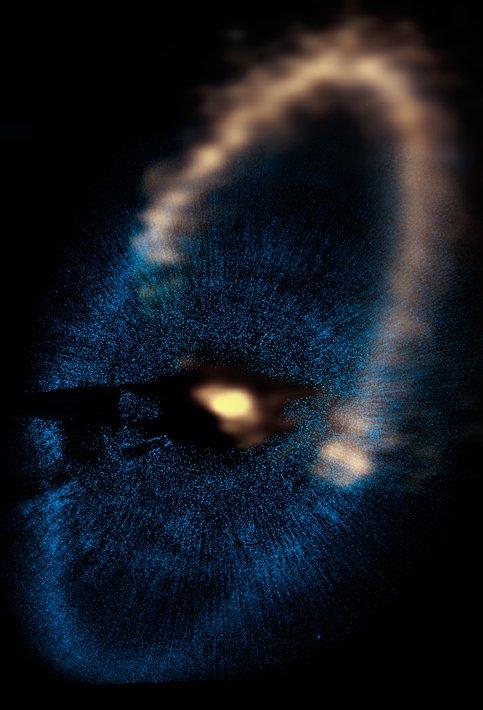