TOP
News
First Detection of an Intermediate-Mass Black Hole Candidate in the ... 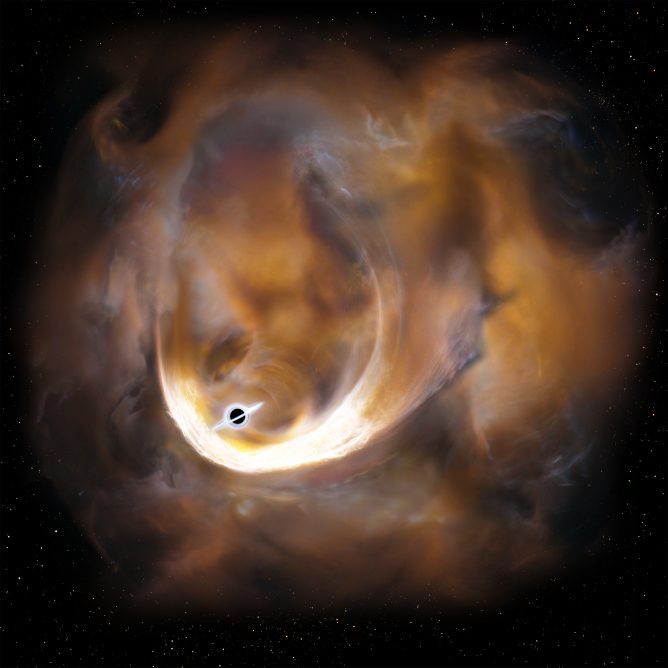 An image of clouds accelerating due to gravitational scattering caused by the intermediate-mass black hole. Credit: Tomoharu Oka (Keio University)

Professor Tomoharu Oka of the Department of Physics, Faculty of Science and Technology, Keio University and his research team carried out a detailed radio wave observations using the Atacama Large Millimeter/submillimeter Array (ALMA; ALMA telescope) on the peculiar molecular cloud CO–0.40–0.22, which was discovered in the central region of the Milky Way. This peculiar molecular cloud lies about 200 light-years away from Sagittarius A* (star), the nucleus of the Milky Way, and inside it’s unusually broad velocity width, the researchers identified the possibility of an intermediate-mass black hole with a mass 100,000 times greater than the sun. From the observations, a point-like radio source CO–0.40–0.22* (star), as well as a highly dense and compact molecular cloud near the center of CO–0.40–0.22, were detected. The luminosity of the detected point-like radio source is 1/500 of Sagittarius A*, and it has a radiation spectrum that is distinctly different from that of thermal plasma or interstellar dust. Results of gravitational N-body simulations that placed a 100,000-solar mass point-like mass at the location of CO–0.40–0.22* showed that the distribution and motion of gas in the adjacent area could be reproduced very well. From these findings, it can be thought that the point-like radio source CO–0.40–0.22* is the intermediate-mass black hole that has been suggested to exist within the peculiar molecular cloud CO–0.40–0.22. This is the first detection of an intermediate-mass black hole candidate within the Milky Way galaxy in which we exist.

The results of this research were published in the September 4 issue of the British scientific journal Nature Astronomy.