It is known that gas jets are ejected from a baby star, but it was not clear how the jets are formed. By observing the rotation of the jets in detail and combining it with theoretical models, astronomers identified the driving mechanism and the role of the jets in star formation.
Using ALMA, the team led by Yuko Matsushita at NAOJ found that the jets from a protostar OMC 2/FIR 6B are rotating at very high speed. The velocity of rotation and angular momentum of the FIR 6B jets are the highest among all the jets detected so far. The rotational velocity and angular momentum are much larger than previously predicted and can only be explained by the magnetic drive model. The rotation of the jet can be realized by forcing the rotation of a disk at a radius of 3 au from the protostar to be transmitted to matter at a distance of 100 au by the force of a magnetic field. This research has also clarified that jets appear due to the effect of magnetic fields. The jet also causes the gas in the disk to lose its angular momentum and fall to the center of the disk, helping the protostar to grow. These super-fast rotating jets appear only during the short period when the young star growing. This study showed that jets play an essential role in the growth of stars. 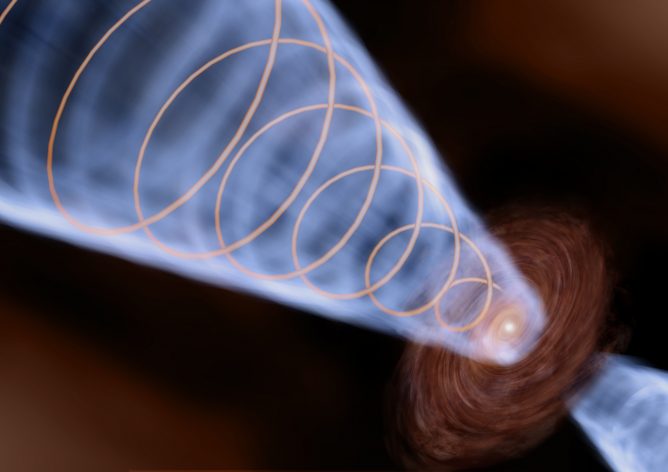 Artist’s impression of a jet spiraling out of a protostar
Credit: Kyushu University, All rights reserved.

Paper information
These research results were published as Yuko Matsushita et al. “Super-Fast Rotation in the OMC 2/FIR 6b Jet” in the Astrophysical Journal on July 22, 2021.