The Japan Geoscience Union Meeting 2019 (JpGU 2019) was held at Makuhari Messe in Chiba City for five days from Sunday, May 26 through Thursday, May 30. The JpGU is an international academic society that covers a wide range of disciplines including space and planetary sciences, atmospheric and hydrographic sciences, human geosciences, solid Earth sciences, and biogeosciences.

The exhibition at the ALMA booth presented various recent observation results such as those related to the first image of a black hole, planetary formation, astrobiology and others. The booth attracted many people including high school, undergraduate and graduate students, as well as researchers from companies and research institutes.

Responding to the recent news about the first image of a black hole, there were many questions about how to link the telescopes around the world. The telescopes at various places are linked by coordinating simultaneous observations for the same target and combining the obtained data into one image, as if captured by a single colossal telescope.

Generally speaking, a larger aperture telescope can achieve a higher resolution. However, it is practically impossible to make such a gigantic telescope (i.e. parabolic antenna) that measures tens of thousands kilometers in diameter. Then, the best solution was to link the radio telescopes around the globe and form an Earth-sized virtual telescope to achieve a desired resolution to capture a black hole.

The news of the first image of a black hole made the observing method combining multiple antennas widely known to the public. At the ALMA booth, it was explained that the same method has been applied to ALMA observations, showing many other scientific results achieved by ALMA. 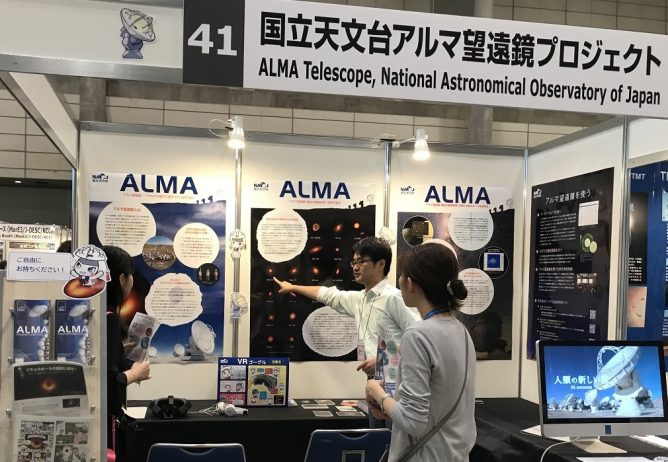 One of the main features of the ALMA exhibition this year was VR (virtual reality) experience, which provides a virtual tour to the ALMA site at an altitude of 5,000 meters in Chile. Although, for most people, it’s very rare to have a chance to visit such a high altitude, just wearing the VR headset brings you to the other side of the world in a second. During VR experience, visitors enjoyed watching 66 ALMA antennas working at the Atacama Desert in Chile. 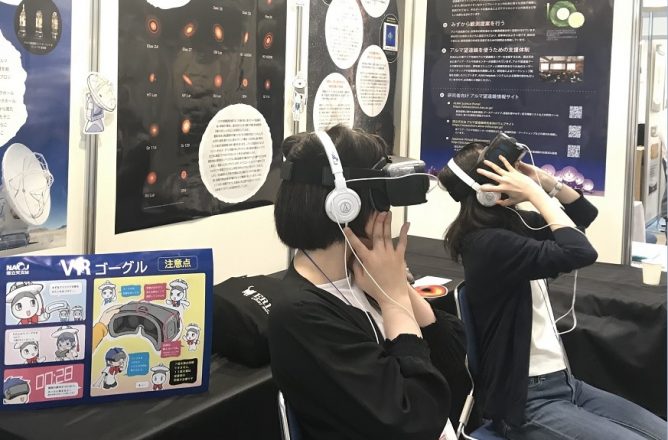