Professor Takaaki Kajita, Director of the Institute for Cosmic Ray Research (ICRR) at the University of Tokyo, is one of the two winners of the 2015 Nobel Prize in Physics. He is also a member of the Advisory Committee for Research and Management of NAOJ. On June 25, Prof. Kajita took the opportunity to visit the ALMA Array Operations Site (AOS) during his trip to Chile to give a lecture to commemorate the 120th anniversary of Japan-Chile diplomatic relations.

Prof. Kajita was accompanied by Naoto Sekimura, Vice President of the University of Tokyo, and people concerned in the University of Tokyo Atacama Observatory (TAO). Since Prof. Kajita is a leader of the operation group of Super Kamiokande located underground in the Kamioka-mine, Gifu, Japan, he expressed his impressions of the ALMA site, mentioning particularly the severity of the environment at high altitudes and the difficulty of operations in maintaining various instruments functional. “I hope young researchers will actively promote science at leading-edge facilities like ALMA,” said Prof. Kajita.

At the AOS, Prof. Kajita signed on the flag of Chile, with a message saying “Viva Chile, Viva ALMA”. 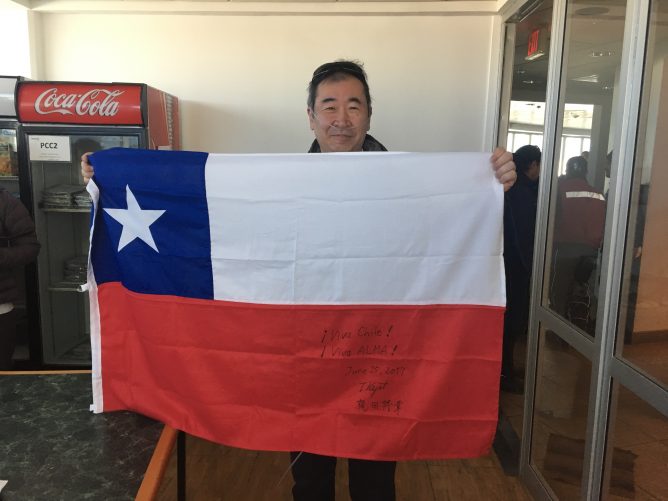