From October 13 through 14, Mitaka Open House Day was held at the NAOJ Mitaka Campus. This is an annual event of NAOJ to present the latest astronomical achievements with exhibitions, lectures, and opening of the facilities to the public. Although the weather was not favorable for some outdoor activities such as a star gazing party and astronomical observation experience using telescopes, the event attracted a large number of people despite a rainy day.
Mitaka Open House Day 2017

The theme of this year’s open house day is “Cold Universe and Hot Universe”. Radio telescopes like ALMA are capable of observing cold dust and gas in the universe. In the lecture titled “Cold Universe Observed by ALMA” Testsuo Hasegawa, a distinguished professor at the NAOJ Chile Observatory, talked about wide-ranging topics from the history of radio astronomy to the latest scientific results in a manner easy to understand to the public.

The NAOJ Chile Observatory presented exhibitions at the ALMA building, which include popular attractions such as ALMA virtual reality (VR) experience where people can feel as if they are walking through the antennas at the ALMA observing site using a VR headset, mini-lectures, and exhibitions of posters and miniature models. A newly-installed 4K monitor showed drone aerial movies of the ALMA telescope, which was arranged to help people get the feeling of a large scale of the extended antenna configuration up to 16 km with vivid and detailed image. 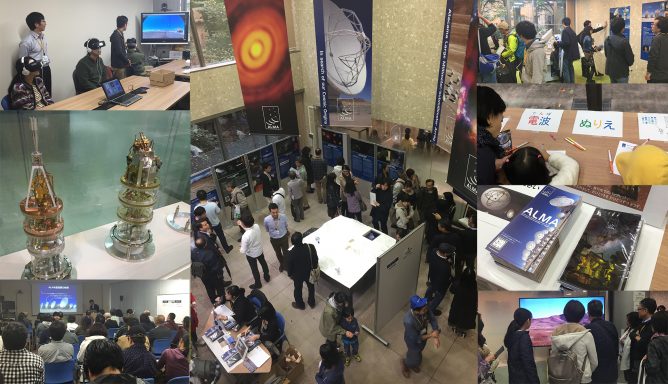 ALMA Short Talk is a new program of this year, which was held along with mini-lectures for 30 minutes. In the talk, nine researchers (including students) talked shortly about their research for 10 minutes. The ALMA telescope has been utilized in various fields and ALMA has a wide range of target objects from gas and dust that form stars and planets, and galaxies that contain thousands of stars, to the Sun. The aim of ALMA Short Talk is to introduce the breadth of the ALMA-related research conducted by various researchers. The audience seemed to have enjoyed their short talks and asked many questions actively at the end of each talk.

The best part of the open house event is to be able to talk and ask questions directly to researchers and engineers. We are looking forward to welcoming more visitors to the open house day next year.