TOP
News
An Extraordinary Celestial Spiral with a Twist

An Extraordinary Celestial Spiral with a Twist

An international team of astronomers, led by Hyosun Kim in Academia Sinica Institute of Astronomy and Astrophysics (ASIAA, Taiwan), has found a way of deriving the orbital shape of binary stars that have orbital periods too long to be directly measured. This was possible thanks to an observation toward the old star LL Pegasi (also known as AFGL 3068) using the state-of-the-art telescope, the Atacama Large Millimeter/submillimeter Array (ALMA). This work appears in the journal Nature Astronomy this week, and is selected as the cover story of the March issue. 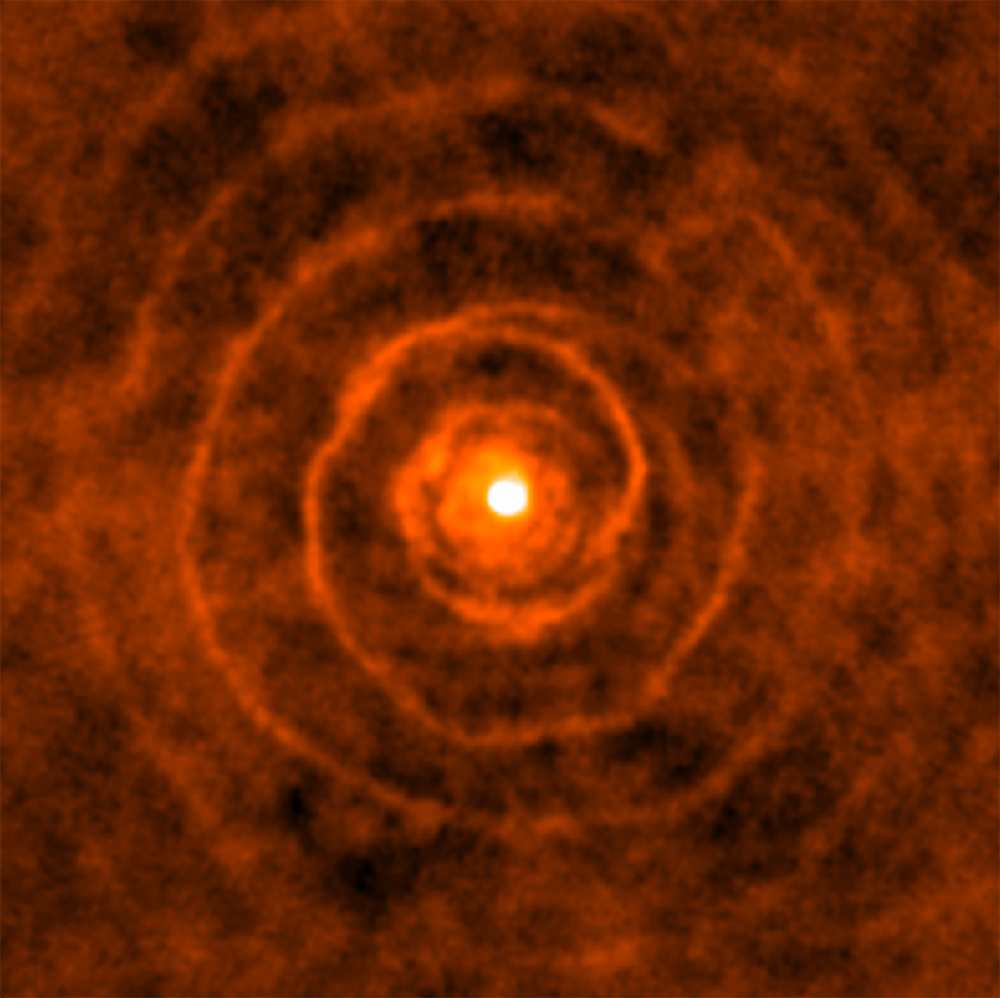 “It’s really exciting to see such a beautiful spiral-shell pattern in the sky. Our observations of LL Pegasi binary system have revealed the delicately ordered three-dimensional geometry of this spiral-shell pattern, and we have produced a very satisfying theory to account for its details,” says Hyosun Kim.

The new ALMA images reveal the detailed features of spiral-shell pattern imprinted in the gas material continuously ejected from LL Pegasi. A comparison of this observation with computer simulations led the team, for the first time, to the conclusion that a highly elliptical orbit is responsible for the morphology of gas distribution surrounding this binary system. In particular, the bifurcation of the spiral-shell pattern that is clearly visible in the ALMA images, is a unique characteristic of elliptical binaries. This quintessential object opens a new window on the nature of central binaries through the recurrent patterns that reside far from the star at distances of a few thousand the stellar radii.

“Because LL Pegasi is 3,400 light years away from us, the exquisite sensitivity and ability of ALMA to image with high precision such complex spiral patterns were essential for this study. We are delighted to see the crisp images translated into rich results and their implications in binary studies,” says Alfonso Trejo (ASIAA, Taiwan), a co-author of the study.

Binaries in elliptical orbits for stars in late stellar evolutionary phases may be ubiquitous over a large period range. Many planetary nebulae—stars being in the next stage of stellar evolution—consist of nearly-spherical structures in the outer part and highly-asymmetric structures in the inner part. Near-spherical patterns include those appearing like spirals, shells, and arcs, while highly non-spherical features are bipolar- or multipolar-like. The coexistence of such geometrically distinct structures is enigmatic because it hints at the simultaneous presence of both wide and close binary interactions.

This phenomenon has been attributed to the binary stars with elliptical orbits. As indicated by the current research, the orbital parameters of central binaries can be obtained by a careful inspection of the outer recurrent patterns, which hint at the origin of the transition from the near-spherical to asymmetric structures.

LL Pegasi is a mass-losing giant star with a size of 200 times or more that of the Sun. Among the stellar evolutionary phases, it is currently on the asymptotic giant branch, which reflects the future of the Sun a few billion years from now. This star was spotlighted about 10 years ago due to a picture of an almost-perfect spiral taken with the NASA/ESA Hubble Space Telescope (HST). The presence of a spiral surrounding an old star had never been reported before the discovery of this object.

“This unusually ordered system opens the door to understanding how the orbits of such systems evolve with time, since each winding of the spiral samples a different orbit in a different time frame,” says Mark Morris (UCLA, USA), a co-author of the study.

The regularity of the pattern was quite surprising, leading to its being considered as a binary system in a circular orbit. It is now equally striking that this best-characterized, unambiguous, and complete spiral is actually influenced by an elliptical-orbit binary.

“While the HST image shows us the beautiful spiral structure, it is a 2D projection of a 3D shape, which becomes fully revealed in the ALMA data,” says Raghvendra Sahai (JPL, USA), a co-author of the study. The new ALMA images reveal the spatio-kinematic information of dense molecular gas in the spiral-shell pattern, unveiling the dynamics of the mass loss from the giant star modulated by its orbital motion.

Movie. Visualizing the ALMA image cube of LL Pegasi. Each frame of the video shows the molecular gas material surrounding LL Pegasi for a different line-of-sight velocity. This velocity, advancing 1 km/s per frame, is given at the top-right corner. The field size is 20,000 times the distance between the Sun and the Earth.
Credit: ALMA (ESO/NAOJ/NRAO) / Hyosun Kim et al.

“The interval of spiral arms yields the orbital period of LL Pegasi to be about 800 years, at which the binary motion can be barely detected even with continuous observations over several human lifetimes. Decoding the spiral-shell pattern is a clever way to trace back the history of orbital motion,” adds Sheng-Yuan Liu (ASIAA, Taiwan), a co-author of the study.

“By putting this striking spiral-shell on display, nature has left us some clear messages. Deciphering those messages to determine the dynamics of the central stars is the challenge that astronomers are facing,” remarks Hyosun Kim. 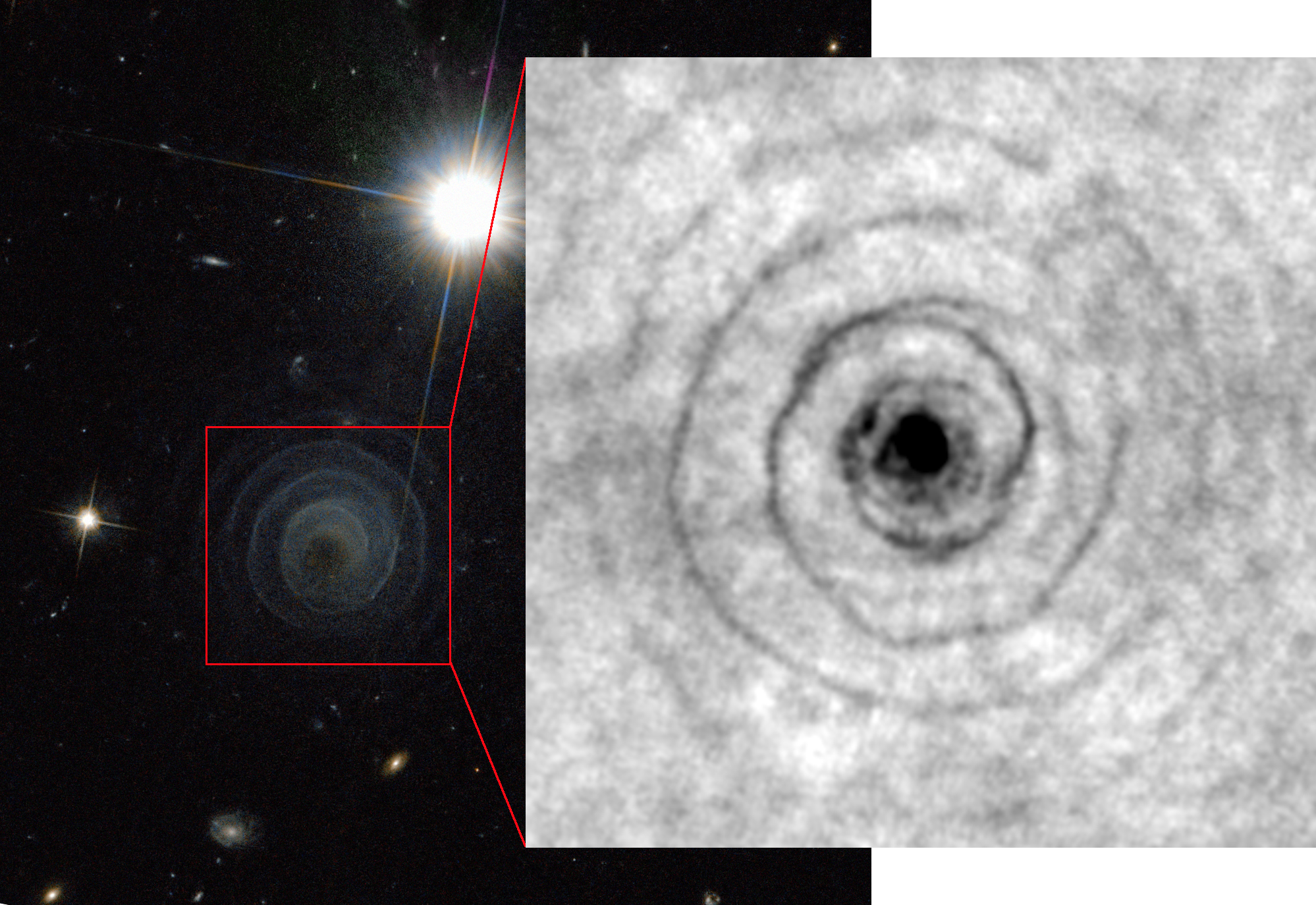 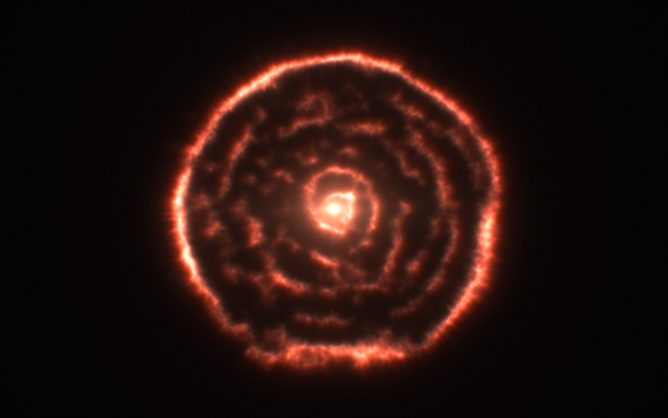