On July 22, the IAU Minor Planet Center announced that the asteroid 1995 WG5 was named “Kohichiro” in honor of the late Koh-Ichiro Morita, a professor at the National Astronomical Observatory of Japan, who made a great contribution to the design and development of the Nobeyama Millimeter Array and the Morita Array as part of ALMA.

The asteroid was discovered by Kin Endate and Kazuo Watanabe in Hokkaido, Japan, on November 18, 1995 and tentatively called “1995 WG5”. The asteroid Kohoichiro is an asteroid orbiting in the asteroid belt between Mars and Jupiter, which is now being observed in the direction of the constellation Pisces with a brightness magnitude of about 18. The estimated size of the asteroid is of about 7 km. 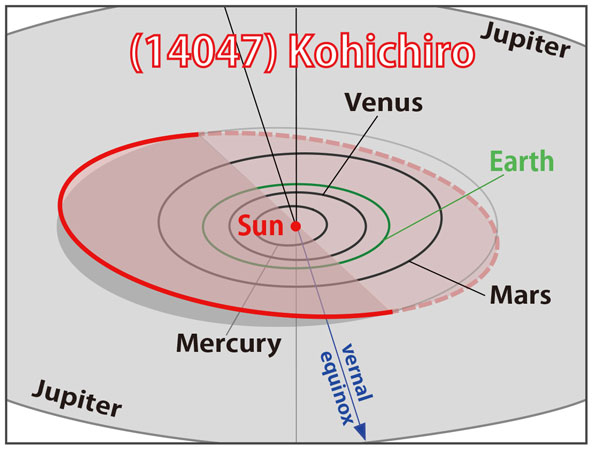 Diagram of the orbits of the Asteroid Kohichiro and planets.

This is a photo of the asteroid Kohichiro (indicated by red arrows) captured in 1995 when it was first identified (a black-and-white photo provided by Kazuo Watanabe). This is a composite picture made by overlaying two images which were taken at an interval of about 20 minutes with a slight vertical displacement. While normal stars move toward the vertical direction, the asteroid Kohichiro shows a diagonal shift differently from others. The numbers from 1 to 6 indicate the fixed stars which were used as a reference to determine the precise position of the asteroid. [Credit: Kazuo Watanabe] 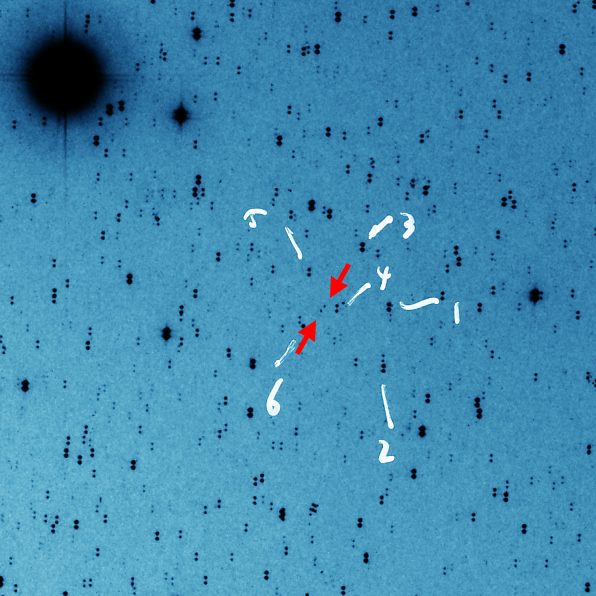