Dr. Masato Ishiguro, one of the original members of the construction project as a Japanese national project at the time, expressed his joy in receiving the award saying, “March 13, 2013 was the happiest day in my life. At the closing of the inauguration ceremony, President Piñera gave a starting command and the antennas came into operation all together. It was a very impressive moment and I couldn’t help stop crying. Running through my head at that time were hardships in proceeding with the project over 30 years and many faces of my colleagues who worked together to overcome the difficulties. It is a great honor and great pleasure to receive this prestigious award soon after such a stirring event. I think the award was given to all the Japanese ALMA team members. Japan made a great contribution, which has been highly acclaimed worldwide. This, however, wouldn’t have been possible without dedicated efforts of all excellent staff members or without wide and warm support from Japanese citizens. I would like to share the joy with all these people.”

Dr. Satoru Iguchi, EA project manager leading the regional East Asian ALMA project, comments looking back the history of the international ALMA project, “Japan came up with the original project plan in the 1980’s before other nations, but our budget acquisition was two years behind other partners. Despite this delay, the Japanese team stepped up years of efforts and successfully handed over the first Japanese antenna as the first ALMA antenna. I think this is the result of united and persistent efforts of all staff members and Japanese cutting-edge manufacturing technologies. Our aperture synthesis technique combining two types of parabolic antennas, which are different in diameter, dramatically improved the imaging accuracy. I was greatly impressed when it was demonstrated by a test observation with actual ALMA antennas.”

While most of the 66 ALMA antennas are 12-m antennas, a small portion of them are smaller 7-m antennas which were developed and manufactured by Japan. Although larger antennas can achieve a higher spatial resolution, they have difficulty creating accurate images of astronomical objects due to a physical space constraint between neighboring antennas. ACA, the Atacama Compact Array, was developed as a solution for this. Based on the optimization analysis, the Japanese team derived the best antenna diameter, and the best number and configuration of antennas: an array of 16 antennas consisted of four 12-m and twelve 7-m antennas. The commendation by MEXT was bestowed considering the importance of this research on ACA and its achievements. Three award winners states, “This award was given for the achievements made not only by the three of us but also by all the ALMA-related staff from East Asia, Europe, North America, and Chile. Especially, we would like to express our deepest gratitude for the dedicated efforts of the late professor Koh-ichiro Morita who took charge of the basic design of ACA over 10 years ago and passed away in Chile last year.”

Dr. Tetsuo Hasegawa, who plays a central role in the management as NAOJ Chile Observatory Director in Chile, mentions the potential of ALMA which started its full operations this year, “ALMA is a revolutionary telescope that will change the astronomy of the 21st century. Being enhanced by ACA which captures accurate image of extended structures, ALMA has now even greater impact on astronomical researches. High precision imaging provided by ALMA will unveil mysteries of the universe such as the formation/evolution process of planetary systems and galaxies and evolution of interstellar materials leading to the birth of life.”

Achievements:
Aperture synthesis telescope is one of the most advanced techniques to observe astronomical objects by making a single virtual telescope with multiple parabolic antennas. While this method has the advantage of being able to produce images at high resolutions, it has difficulty in accurately capturing the physical state of target objects, particularly of extended structures which could be inevitably distorted due to spacing between antennas that cannot be closer than the antenna diameter.
The purpose of this research was to improve the accuracy of radio images of the ALMA telescope, a new-generation astronomical facility exploring the birth of galaxies and planetary systems, and the origin of life, by adding an array of smaller antennas to a larger aperture synthesis interferometer array and synthesizing their data. As a result of the study, an optimal antenna diameter and optimal number and configuration of antennas were defined.
The ALMA test observations proved that this research contributed to solving the missing flux problem of extended structures and remarkably improved the imaging accuracy of ALMA. It is expected that this research will further contribute to the improvement of a revolutionary telescope ALMA and produce results that will guide astronomers of the world in the solution of mysteries of the universe. 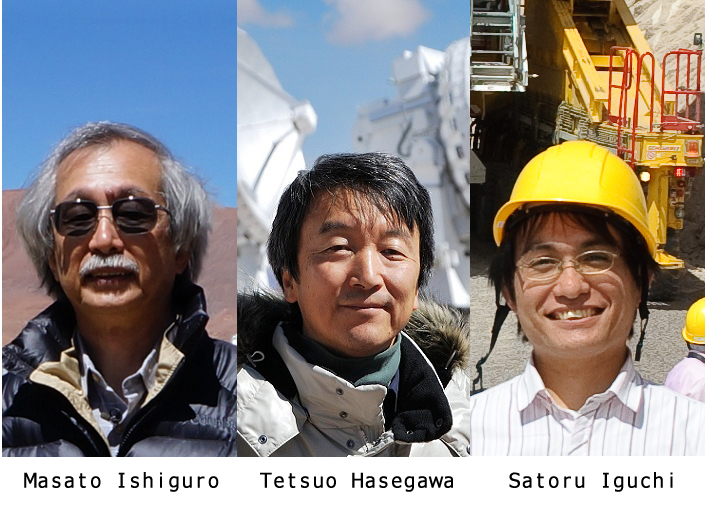