ALMA telescope successfully captured its first radio image with Band 4 receiver developed by Japan in an ALMA test observation conducted in January 2013. The target object was IRAS16293-2422, a protostar (baby star) in the constellation of Ophiuchus. The telescope received radio emission from carbon sulfide (CS) molecules surrounding the star and imaged their distribution (Photo 3).

ALMA has 10 receiver bands to cover a wide range of observing frequency. For more effective reception of different bands of frequency, dedicated receivers have been developed for each band. Among them, Japan assumes the development of three bands: Band 4 (receiving frequency: 125 to 163 GHz); Band 8 (385 to 500 GHz); and Band 10 (787 to 950 GHz).

There are few millimeter/submillimeter receiver products commercially available because radio reception and transmission at these wavelengths not only require highly advanced technique but also have difficulty due to high absorption rate. For this reason, the National Astronomical Observatory Japan (NAOJ) Advanced Technology Center (ATC) and other partner institutes embarked on the development of high sensitivity receivers for ALMA from 2004. The sensing part, SIS device* which is the heart of the receiver has been developed and fabricated in the ATC clean room environment, while optical parts and their supporting structures to transmit radio waves to the SIS device in the ATC mechanical engineering shop. The Band 4 receiver was shipped to Chile through two design reviews (preliminary design review and critical design review) to ensure that they all fulfill the high-level requirements of ALMA. In June 2010, the Band 4 receiver successfully received the first radio spectrum from a target object. Through continued production and performance tests, the Band 4 finally achieved the first radio imaging of an astronomical object. Yoshinori Uzawa, the leader of the Band 4 development team says, “I am so happy to hear the news of the first successful radio imaging with our Band 4 receiver. During the development phase, we faced many technical challenges, but we pulled together as a team to solve each problem and finally reached here. We expect our receiver will be used by many astronomers around the world to solve the mysteries of the universe.”

Click to Enlarge (JPEG/ 209KB)
Photo1. Band 4 receiver (54 cm high). Radio waves enter from the conical metallic tube at the top called “horn” and converted into electrical signals inside the mixer block at the lower part where the SIS device is located. The Band 4 receiver cartridge is contained in a vacuum cooler called “cryostat” together with other band receiver cartridges and installed into each antenna. 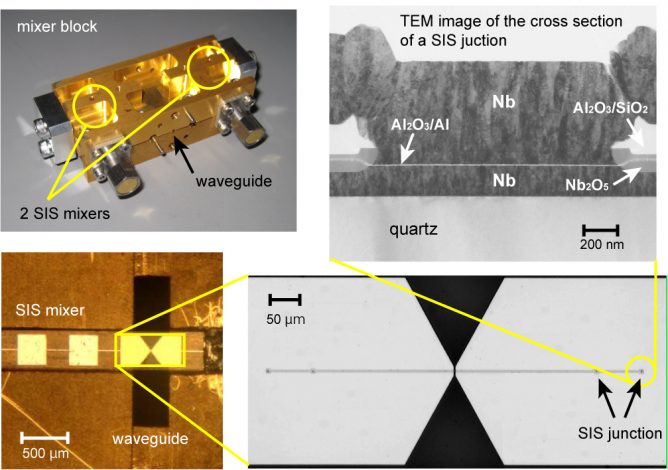 ALMA Band 4 receiver is designed to achieve more than twice the sensitivity of the NAOJ Nobeyama Millimeter Array receiver that covers the same frequency range. Such high sensitivity is realized by the newly-developed high performance superconductive device and low-loss waveguide mixer block.

The mission of the ALMA receiver development team was not only to satisfy the highest ALMA specifications, but also to bring such high performance receiver into stable production. Each receiver cartridge for different frequency band will be installed together in each of 66 ALMA antennas. To make operational “a radio interferometer” consisting of multiple antennas, all of the installed receivers need to deliver good performance in unison. Toshikazu Takahashi, Band 4 team technical lead, mentions the difficulty of receiver production as follows, “Unlike manufacturing industry, NAOJ had little experience in mass production of uniformly-designed products. We have overcome this hurdle with through product control of each component, newly established component tracking system, and proper safety control of the transfer to Chile.” Hideo Ogawa, a professor at Osaka Prefecture University, who has been deeply involved in the basic technology research for the development of the Band 4 receiver, says, “Development of Band 4 receiver required united efforts of many people, including specialists of superconducting technology, companies with microfabrication technique, and skilled researchers engaged in optical design and performance evaluation. This is the result of the state-of-the-art technologies achieved by all partner universities, institutes, and companies in Japan and abroad.”

Shin’ichiro Asayama, a senior RF engineer at the Joint ALMA Office, who led the basic design of the Band 4 receiver and then played a key role in test observations with Band 4 in Chilean site, says, “I am very pleased with this success. The Band 4 receiver boasting the world’s highest performance finally worked and produced high-quality radio image as part of an array. I express my deepest gratitude to all involved in the development.”

The target of this Band 4 receiver test observation was a protostar IRAS16293-2422 about 400 light years away toward the direction of the constellation of Ophiuchus with six 7-m antennas developed by Japan. The baby protostar is surrounded by a large amount of gas that served as a seedbed for the star. This test observation captured radio emission from carbon sulfide (CS) molecule contained in the gas at 147 GHz. Since CS molecule produces strong radio emission in a high gas density region, it is suitable for the observation of gas being soaked into a nearby baby star. Other prospective radio sources in the frequency range covered by the Band 4 receiver include formaldehyde (H2CO), deuterium compound, and carbon chain molecule (a linkage of carbon atoms), which are found in large quantities in cold star forming regions. Tsuyoshi Sawada, a system astronomer at the Joint ALMA Observatory (JAO) who analyzed this radio image, says, “We expect ALMA observation with Band 4 receiver will provide more data of interstellar matters and promote understanding of the formation process of stars and galaxies yet to be investigated.”

SIS is an acronym of “Superconductor-Insulator-Superconductor”. As its name suggests, SIS has a sandwich structure with an extremely thin insulator (about 1 nm thick) between two superconducting electrodes. Normally, an insulator blocks the flow of electric current but an extremely thin insulator conducts current due to quantum tunneling effect. By measuring this tunnel current which will be a function of the strength and frequency of the incoming radio waves, the SIS device detects faint radio signals at high sensitivity. The size of the SIS junction of the Band 4 receiver is 1.8 square micrometers. The SIS device is manufactured with highly advanced manufacturing technique using thin-film-fabrication equipment and exposure equipment like those for semiconductor production.

Photo 3. Gas surrounding the protostar IRAS16293-2422, captured by observation of CS molecular emission. The moving velocity of the molecular gas around the star can be obtained by Doppler shift measurement of radio emission. 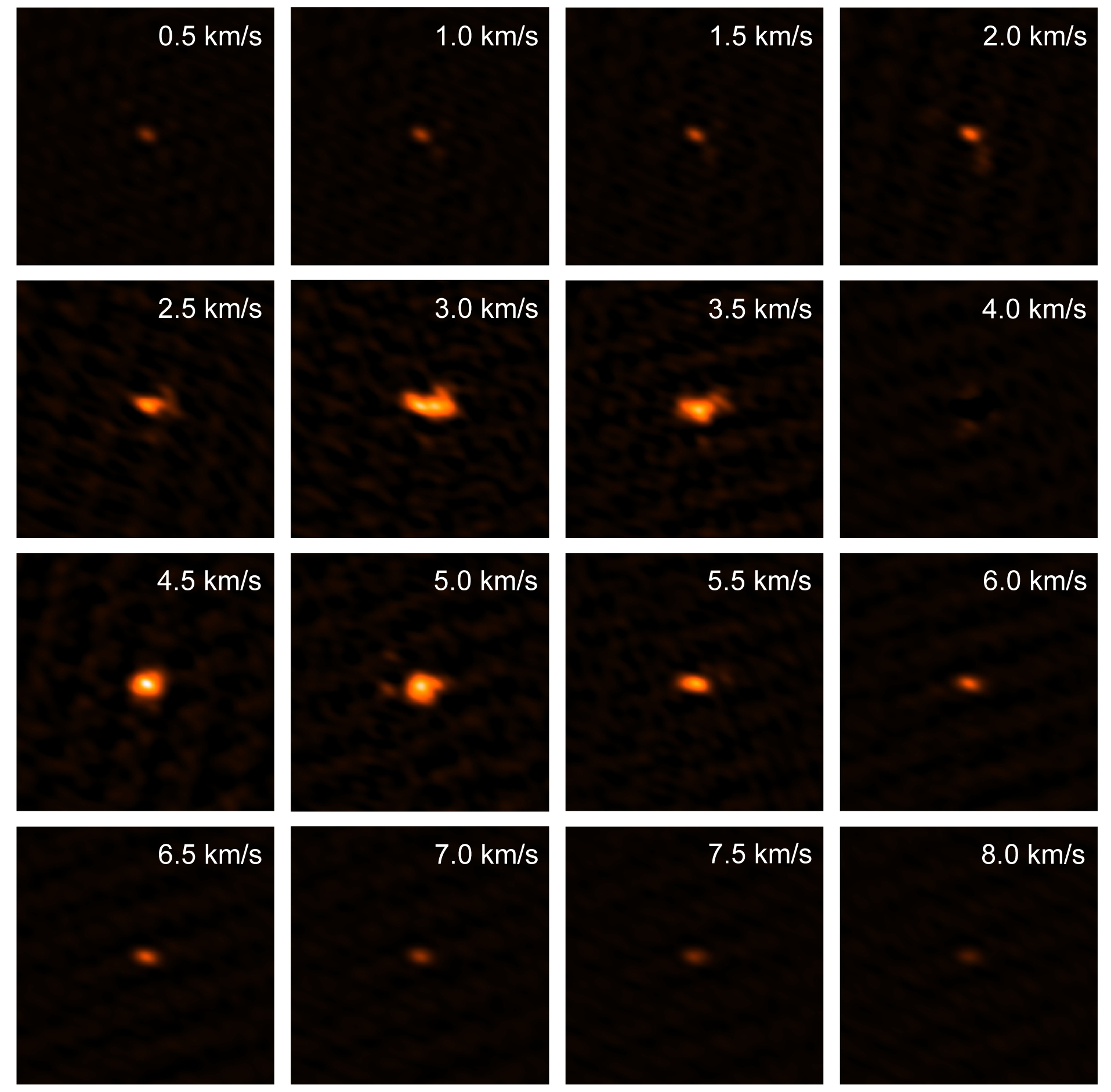 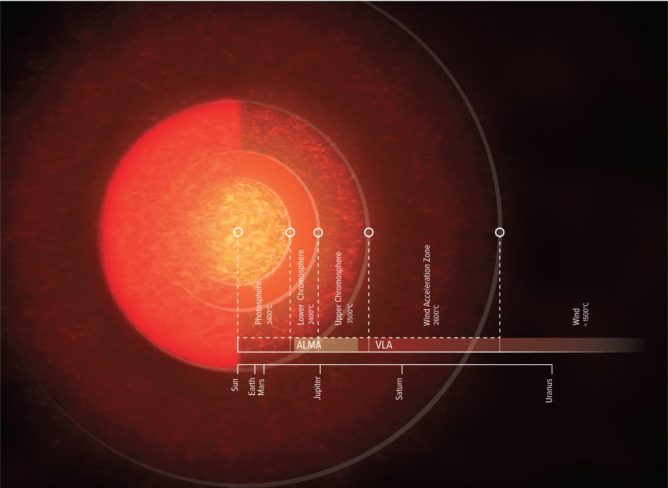