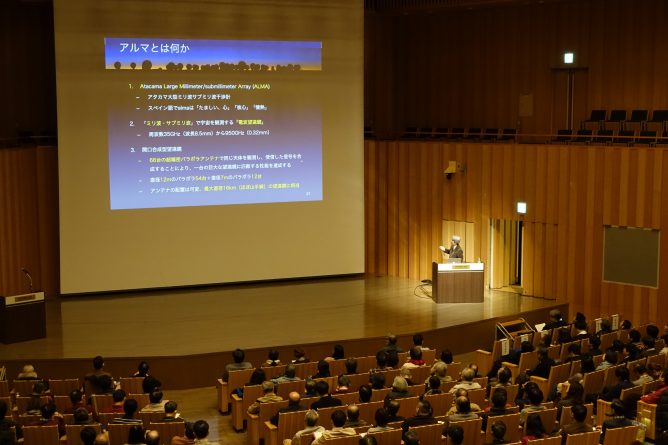 The first speaker was Tetsuo Hasegawa (Distinguished Professor at the NAOJ Chile Observatory) who has been engaged in the ALMA project for a long time and led the project in Japan and Chile. The talk began with the introduction of radio astronomical observation and moved to the topic of interferometer that works as single telescope combining multiple antennas. Then the talk entered the best part of the talk titled “ALMA was not built in a day” with the history and achieved milestones to the completion of ALMA. Looking back the history of ALMA, the ALMA project was established as an international project that was initially started by Japan, North America, and Europe. At first Japanese astronomers were planning a large radio interferometer on its own based on the achievement of the NAOJ Nobeyama Millimeter Array. The newly established international project was carried out while overcoming the differences in cultures and concepts and taking a balance of costs and performance to realize the ultimate telescope that has ever been achieved. Distinguished professor Hasegawa talked why he has continuously devoted himself to exploration of the universe despite difficulties and hardships he has faced so far in leading the international project.

The second speaker was a non-fiction writer Kazuma Yamane, the author of “Creators of the Super Telescope ALMA” (Nikkei BP Consulting, Inc.) The thick book he wrote is filled with the stories of struggles and passion of astronomers and engineers engaged in the construction of ALMA. Mr. Yamane visited the ALMA site at 5000-m altitude in Chile twice. Furthermore, he visited manufactures and small factories all over Japan who produced the parts of the antenna, receiver and correlator to see and hear the voices of many engineers and conducted surveys of the ALMA telescope with very close attention to detail. In the talk, he presented photographs and movies he took as well as behind-the-scenes stories that brought laughter and many oohs and aahs. 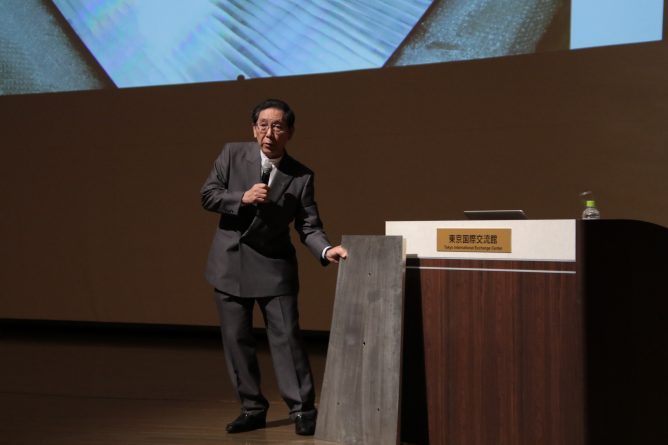 What Mr. Yamane is showing is an aluminum panel which is used as a part of the ALMA main reflector (dish of the parabolic antenna). For reduction of weight, the back side of the reflector is carved out to form a honeycomb structure. Since the panel is as thin as 2 mm, the weight is significantly trimmed down for its large size.
Credit: ALMA (ESO/NAOJ/NRAO)

The third speaker was Dr. Takayuki Muto, an associate professor of astronomy at Kogakuin University. Dr. Muto, who was specialized in theoretical study related to planetary formation process, has been conducting observational research with ALMA in recent years. Since ALMA started its operation in 2011, it became possible to directly observe planetary formation process that was only assumed on a theoretical basis. The image of planetary forming regions captured by ALMA gave astronomers a great surprise. In the talk, Dr. Muto shared with the audience the efforts and excitement in carrying out astronomical research. 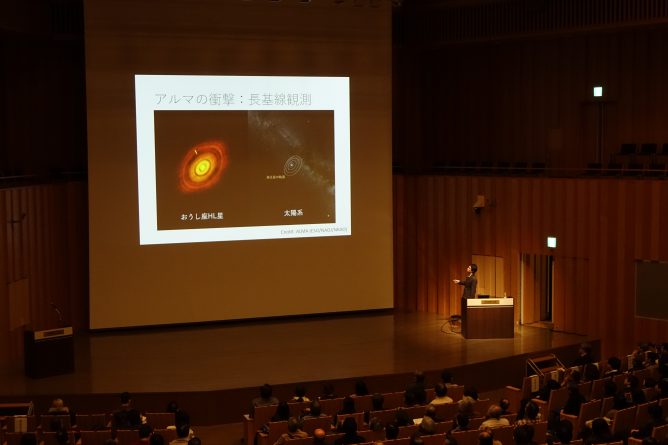 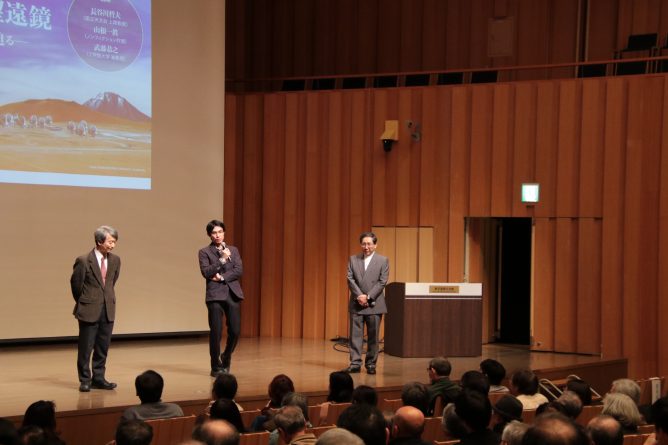 In the Q&A session at the end of the event, the audience endlessly asked questions to the speakers, which looked like showing people’s insatiable curiosity about the mysteries of the universe. After the event, there were good conversations between speakers and participants at the lobby of the building, which was an enjoyable time for speakers too.