The ALMA observations by a team of researchers led by Takahiro Iino, Project Associate Professor of Information Technology Center, The University of Tokyo, detected a poisonous gas called hydrogen cyanide in the atmosphere of Neptune, the farthest planet in the Solar System. Previous observations showed that hydrogen cyanide exists on its stratosphere. The team went further and revealed first ever that it is distributed in a belt-like way on the equatorial stratosphere. Since it is believed that the air flows to a hydrogen cyanide rich region, the high possibility exists that, in Neptune’s southern hemisphere, the air is transported upward in around the latitude of 60 degrees south and then downward at both the equator and south pole. This study also shows that combination of the latest ground-based telescope with analysis technology enables the atmospheric environment to be uncovered even on the most distance planet from the Sun through detailed observations of atmospheric constituents in small quantities. Continuous observations are also possible with ground-based telescopes, which cannot be achieved with spacecrafts.
share
tweet 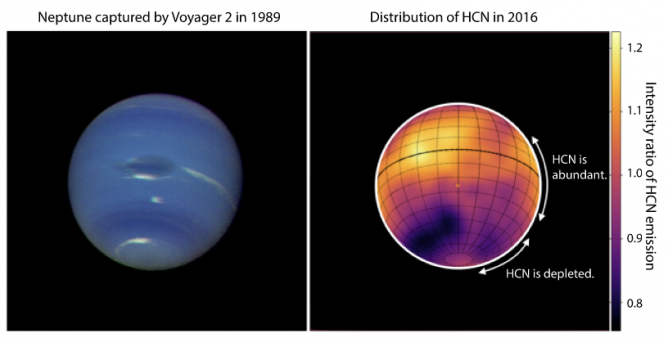 (Left) Image of Neptune captured by Voyager 2 in 1989, showing its atmospheric structure, including the complex shapes of clouds, induced by active atmospheric dynamics. (Credit: NASA/JPL)
(Right) The study reveals the distribution of hydrogen cyanide on Neptune, which clearly shows the high abundances at the equator while it is depleted primarily at 60 degrees south. (Credit: The University of Tokyo. All rights reserved.)

Neptune orbits the Sun at the outermost edge, and its atmosphere is composed mainly of hydrogen and helium, like other “gas planets” such as Jupiter, Saturn, and Uranus. What distinguishes Neptune from other gas planets is that, according to past studies, it has an abundance of gaseous hydrogen cyanide [1] Hydrogen cyanide is denoted as HCN in the chemical formula. It is extremely poisonous, causing severe difficulty in breathing. In World War II, hydrogen cyanide was produced as a chemical weapon. In radio astronomy, the molecule is a frequent target of observation, detected in the atmosphere of planets, such as Jupiter other than Neptune.in the upper stratosphere. The tropopause, which is the boundary in the atmosphere between the troposphere in the low altitude and the stratosphere above the troposphere, is as extremely low as minus 200 degrees in temperature, where most of the gas changes into liquid. This low temperature prevents easily-condensed gases such as hydrogen cyanide from rising to the stratosphere. The mechanism that allows hydrogen cyanide to move into the upper stratosphere has greatly puzzled researchers of the Solar System.

Iino’s team successfully observed a detailed distribution of gaseous hydrogen cyanide on Neptune’s stratosphere by ALMA. Their research has shown that the peak intensity of hydrogen cyanide is spotted around the equator (approximately 1.7 ppb), while it is the most depleted around 60 degrees south (about 1.2 ppb). For reference, 1 ppb means that 1 hydrogen cyanide molecule is present per 1 billion atmospheric molecules. Neptune is about 30 times as far from the Sun as is Earth, which hindered the past observations from capturing the distribution of hydrogen cyanide. The observation by the research team is the first discovery that the intensity of hydrogen cyanide is different in degrees of the latitude on Neptune. The achievement has been brought by ALMA, whose maximum set of 66 antennas is mobilized to act like a giant telescope to realize its unprecedented sensitivity and resolution (vision) for short radio waves at a wavelength of around 1 millimeter. Neptune looks quite small from Earth, and its apparent diameter is only about 1/20 that of Jupiter. However, fully leveraging ALMA’s capabilities, the team has brought to light the distribution of the molecular gas on the planet.

The team’s accomplishment proves a ground-based large telescope provides effective means for detailed observations of even trace molecular gases on a distant planet such as Neptune. This study has potential for being pursued further to discern atmospheric dynamics and chemistry by observing distributions of a diverse range of molecules other than hydrogen cyanide. Similar observations, which can be conducted for other planets, are expected to move ahead with a plan to expand observation targets. What provides a great advantage to ground-based observations over space-based ones is continued observations. Ground-based telescopes will thus contribute to understanding of a mechanism of atmospheric activities that are linked with solar activities and a planet’s seasons by capturing short- and long-term changes.

This article is based on the press release by The University of Tokyo.

This research was funded by Japan Society for the Promotion of Science’s Grant-in-Aid for Scientific Research (No. 17K14420, 19K1478), Astrobiology Center of National Institutes of Natural Sciences, and The Telecommunications Advancement Foundation.