Proteins are polymers of amino acids joined together by the peptide bond -NHCO-. Peptide bonds are not only the ubiquity structures in proteins but also the characteristic structures for proteins. Molecules with peptide-like bonds are of particular interest to understand possible routes of protein formation in space. Among 240 molecules detected in space, only four molecules belong to peptide-like molecules.

Recently, an international group led by Juan Li from Shanghai Astronomical Observatory and Xing Lu from the National Astronomical Observatory of Japan, reported the detection of propionamide (C2H5CONH2) toward Sgr B2 for the first time with the Atacama Large Millimeter/submillimeter Array (ALMA). This is the largest peptide-like molecule detected in space. Based on the high resolution and high sensitivity ALMA data, they find a possible propionamide transition whose intensity and velocity are consistent with simulations. The detection of propionamide in Sgr B2 demonstrates that interstellar chemistry can reach sufficient levels of complexity to form relatively large peptide molecules and shows the possible growth of larger amide molecules from smaller ones in a massive star-forming process. Propionamide might also exist in massive star-forming regions in the Galactic disk, such as Orion KL. Future ALMA observations can reveal its presence. 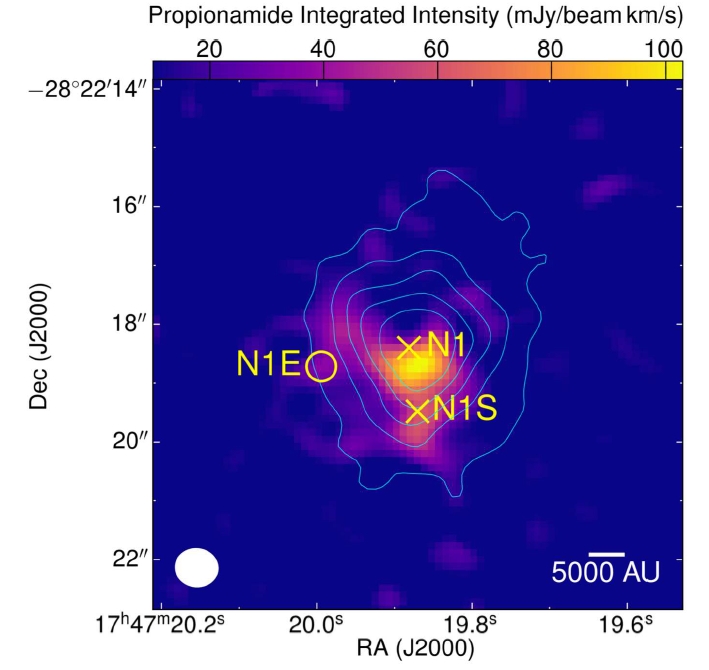 ALMA image of a part of Sgr B2. Distributuons of 13CH3CN and propionamide are shown in contours and color scale, respectively. A compact cloud of warm gas, called hot core Sgr B2 (N1), is located At the center of the observing region.
Credit: Li et al. “Propionamide (C2H5CONH2): The Largest Peptide-like Molecule in Space”, the Astrophysical Journal, 919, 4. September 16, 2021. Copyright: AAS. Reproduced with permission.

The observation results were published in Juan Li et al. “Propionamide (C2H5CONH2): The Largest Peptide-like Molecule in Space” in the Astrophysical Journal on September 16, 2021.

The Atacama Large Millimeter/submillimeter Array (ALMA), an international astronomy facility, is a partnership of ESO, the U.S. National Science Foundation (NSF) and the National Institutes of Natural Sciences (NINS) of Japan in cooperation with the Republic of Chile. ALMA is funded by ESO on behalf of its Member States, by NSF in cooperation with the National Research Council of Canada (NRC) and the Ministry of Science and Technology (MOST) and by NINS in cooperation with the Academia Sinica (AS) in Taiwan and the Korea Astronomy and Space Science Institute (KASI).
ALMA construction and operations are led by ESO on behalf of its Member States; by the National Radio Astronomy Observatory (NRAO), managed by Associated Universities, Inc. (AUI), on behalf of North America; and by the National Astronomical Observatory of Japan (NAOJ) on behalf of East Asia. The Joint ALMA Observatory (JAO) provides the unified leadership and management of the construction, commissioning and operation of ALMA. 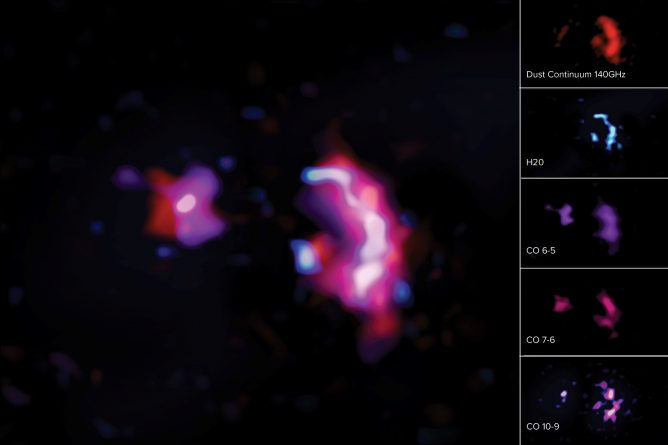 ALMA Scientists Detect Signs of Water in a Galaxy Far, Far Away