The NAOJ ALMA project and Advanced Technology Center have successfully fabricated corrugated horns by all-metal 3D-printing for the ALMA Band 1 receiver (Radio Frequency: 35-50 GHz). The best of these 3D-printed horns are being integrated onto the final ALMA Band-1 receiver production units and tested at low temperatures around –250 degree celsius at the Academia Sinica Institute of Astronomy and Astrophysics (ASIAA) in Taiwan. The fully-tested receivers will be installed on the ALMA telescope, realizing the first ever cryogenic receivers that utilize all-metal 3D-printed components for (sub)mm-wave astronomy.
share
tweet

Additive manufacturing (AM), which produces three-dimensional objects by depositing, joining, and solidifying materials based on 3D models under computer control, has rapidly evolved. AM is becoming increasingly popular not only for metal molds and other parts used in the manufacture of industrial products but also for practical parts used in railroads, automobiles, aircraft, medical equipment, and other applications. AM allows for greater design freedom because it materializes the design model without cutting tools. AM also shortens the time from design to materialization compared to conventional methods, which has the advantage of shortening development periods and reducing the number of inventory items for industrial products. 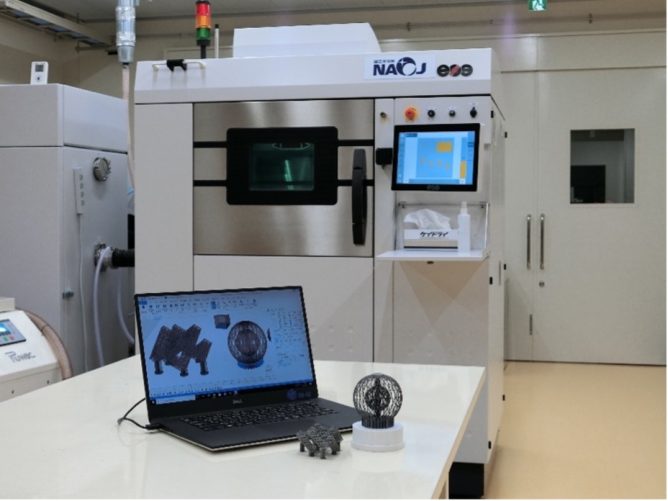 Corrugated horns are the antennas in a receiver which collect electromagnetic waves from celestial objects after these have been focused by the large reflector antenna in which they are installed. Then, the waves collected by the horns are focus on detectors installed at the next component in the signal path. To be used in state-of-the-art radio astronomy receivers, it is not only necessary to satisfy the performance requirements for a corrugated horn, such as antenna beam pattern and frequency characteristics, but also to evaluate the metal material properties to ensure that the horn can function and be used without problems in the environment where it is installed (temperatures around -250 degree celsius & under vacuum conditions). Therefore, it was required to carefully examine and validate the physical and electrical properties such as mechanical strength, shrinkage, thermal conductivity, and electrical conductivity at room and low temperatures. We conducted these verifications with the cooperation of other universities and research institutes with expertise in the field. In addition, we devised various parameters during the modeling process to satisfy the performance requirements of the horn. The team in charge of actual modeling said, “What was difficult for us was the mountain of new things to learn, such as the operation of the newly introduced modeling equipment, peripheral equipment, and dedicated software, as well as the development of the horn itself. In the end, after about two years of development, we have successfully produced a horn that could be used in the same way as a conventional cutting process.” 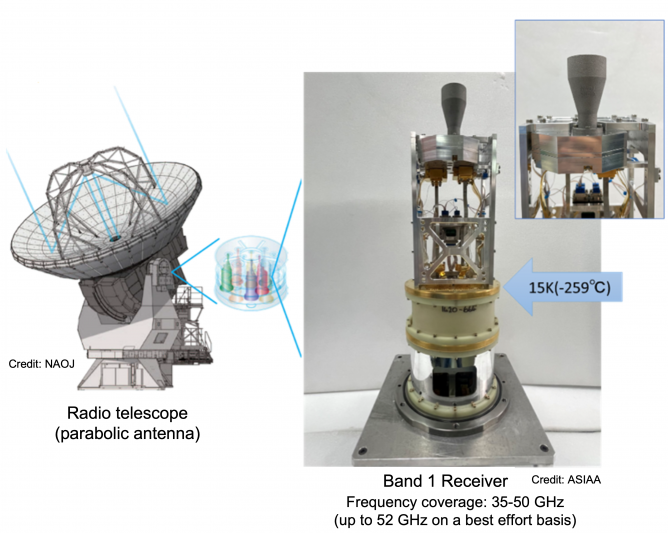 The schematic view of the ALMA antenna on which the Band 1 receivers are being installed (left). The Band 1 receiver with the all-metal 3D-printed corrugated horn (right).
Credit: NAOJ, ASIAA

“All-metal 3D printed fabrication of waveguide components, such as these horns, is a very attractive new fabrication technique. It allows very fast and now accurate fabrication of components for up to 50 GHz operation. This opens many new possibilities in terms of mass-production of components for large interferometers, large multibeam receivers and other applications. In addition, with the new technology, it may be possible to combine several components in a single piece, which is something which cannot be done with traditional fabrication methods. This will eventually allow to improve the performance of astronomical receivers even further. I am glad to say that ALMA will be again a pioneer by using this technology in (sub)mm-wave astronomy.” says Alvaro Gonzalez, East Asia ALMA Program Manager, and involved in the project originally as RF engineer.

The horns have been installed in the receivers produced at ASIAA, the primary developer of the Band 1 receiver, and a final performance evaluation of these receivers is underway. The performance verification results show the horns are compliant with the ALMA specification. “The Band 1 team is excited about the new fabrication technique that can be applied to the Band 1 receiver component fabrication. It is a breakthrough to demonstrate a new direction of fabrication technique in the millimeter-wave radio receiver application. We are looking forward to having these receivers with 3D printing horns integrated into the ALMA front-end and joining operations,” says Ted Huang, the Band-1 project manager and a senior research engineer at ASIAA. The Band 1 receivers with these 3D-printed corrugated horns will be shipped to the ALMA telescope site in Chile in the coming months.

Additional information
The first steps in this development and initial fabrication results were reported as A. Gonzalez et al., “Metal 3D-Printed 35-50-GHz Corrugated Horn for Cryogenic Operation,” in the scientific journal “Journal of Infrared, Millimeter, and Terahertz Waves” (https://doi.org/10.1007/s10762-021-00825-3).

About ALMA:
The Atacama Large Millimeter/submillimeter Array (ALMA), an international astronomy facility, is a partnership of the European Organisation for Astronomical Research in the Southern Hemisphere (ESO), the U.S. National Science Foundation (NSF) and the National Institutes of Natural Sciences (NINS) of Japan in cooperation with the Republic of Chile. ALMA is funded by ESO on behalf of its Member States, by NSF in cooperation with the National Research Council of Canada (NRC) and the Ministry of Science and Technology (MOST) and by NINS in cooperation with the Academia Sinica (AS) in Taiwan and the Korea Astronomy and Space Science Institute (KASI).