An international team has developed, assembled, and integrated a new set of receivers for the Atacama Large Millimeter/submillimeter Array (ALMA), the Band 1 receivers, which have now been installed for the first time in ALMA antennas and successfully achieved the first light. With ALMA’s lowest frequency receivers, astronomers can view the cool Universe as never before.

ALMA, located in the Atacama Desert in northern Chile at an altitude of 5,000m above sea level, is comprised of 66 antennas working as a single giant telescope. This allows it to achieve extremely high resolutions, revealing detailed structures in the millimeter and submillimeter wave bands. Each ALMA antenna is currently equipped with 8 different receivers, covering radio frequencies from 84 GHz to 950 GHz. The Band 1 receiver, covering the frequency range between 35 and 50 GHz (6 to 8.5 mm in wavelength), is one of two remaining missing receiver bands, eventually completing the planned 10 frequency bands.

As a part of the East-Asian ALMA Development program, the Band 1 receiver project is led by the Institute of Astronomy and Astrophysics, Academia Sinica (ASIAA) in Taiwan, in collaboration with the National Astronomical Observatory of Japan (NAOJ), the NRC Herzberg Astronomy and Astrophysics Research Centre in Canada, the National Radio Astronomy Observatory (NRAO) in the US, and the Universidad de Chile (UCh).

“The realization of Band 1 is a testimony of Taiwan’s outstanding engineering capabilities which allow us to be at the forefront of radio instrumentation in astronomy and contribute to key components in the most advanced observing facilities,” says Patrick Koch at ASIAA, the principal investigator of the Band 1 project. 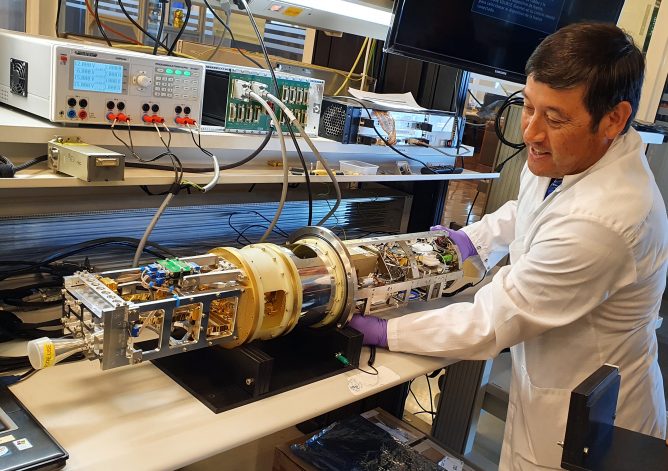 For any new receiver, the successful ‘first light’ marks a major breakthrough as it is the first time that an astronomical signal (light) goes through the entire telescope, from the antenna that is collecting the light, through the receiver with all the backend electronics, to a computer screen at the end of the chain, displaying the result. It is the ultimate test that design, fabrication, and assembly are all perfect. After around 10 years of hard and meticulous work, the Band 1 receiver successfully achieved first light with successful observations of the edge of the Moon on 14 August 2021, followed by the first successful interferometry test observations with two antennas with Band 1 receivers on 17 August, and the acquisition of the first radio spectrum on 27 August. During the test observations, the new receivers successfully received signals from various objects from near to far, including planets (Venus, and Mars), evolved stars and molecular clouds (Orion KL and VY Canis Majoris) in our Galaxy, and extra-galactic distant quasars (3C 279), and the team confirmed the receiver’s performance.

The international team worked hard to integrate the receiver in the ALMA telescope and perform test observations under difficult conditions. “One of the most challenging issues has been the remote coordination of the activities of all the people involved,” says Giorgio Siringo, an ALMA RF Senior Engineer, “which have been carried out from different continents during the pandemic emergency.”

The Band 1 receiver, once installed on all 66 ALMA antennas, will break new ground in various science areas. The new receiver will allow astronomers to peer out at the distant redshifted Universe further than any other receiver on ALMA. Band 1 is also much anticipated to make the next breakthrough discoveries in the study of planet formation. The production of receivers for all ALMA antennas is currently being completed in Taiwan with the goal of offering this new band for open-use observations from Cycle 10, starting in October 2023.

“It will enable the detection of centimeter-sized dust grains and small pebbles in regions where planets can form. With this we can study the growth of dust grains and eventually understand how planets form out of interstellar dust”, says Hsi-Wei Yen, the Band 1 project scientist at ASIAA.

“The first light of the ALMA Band 1 receiver is a major milestone in this project and the East Asia ALMA Development Program, and brings us one step closer to offering this new and highly anticipated frequency band to the astronomical community,” says Alvaro Gonzalez, the East Asian ALMA Program Manager at NAOJ. “It represents another major achievement of the long-term collaboration between NAOJ and ASIAA for ALMA.”

About ALMA
The Atacama Large Millimeter/submillimeter Array (ALMA), an international astronomy facility, is a partnership of the European Organisation for Astronomical Research in the Southern Hemisphere (ESO), the U.S. National Science Foundation (NSF) and the National Institutes of Natural Sciences (NINS) of Japan in cooperation with the Republic of Chile. ALMA is funded by ESO on behalf of its Member States, by NSF in cooperation with the National Research Council of Canada (NRC) and the Ministry of Science and Technology (MOST) and by NINS in cooperation with the Academia Sinica (AS) in Taiwan and the Korea Astronomy and Space Science Institute (KASI).