TOP
Press Releases
Unveiling Galaxies at Cosmic Dawn That Were Hiding Behind ...

Unveiling Galaxies at Cosmic Dawn That Were Hiding Behind the Dust

While investigating the data of young, distant galaxies observed with the Atacama Large Millimeter/submillimeter Array, Yoshinobu Fudamoto from Waseda University and the National Astronomical Observatory of Japan noticed unexpected emissions coming from seemingly empty regions in space that, a global research team confirmed, came actually from two hitherto undiscovered galaxies heavily obscured by cosmic dust. This discovery suggests that numerous such galaxies might still be hidden in the early Universe, many more than researchers were expecting.
share
tweet 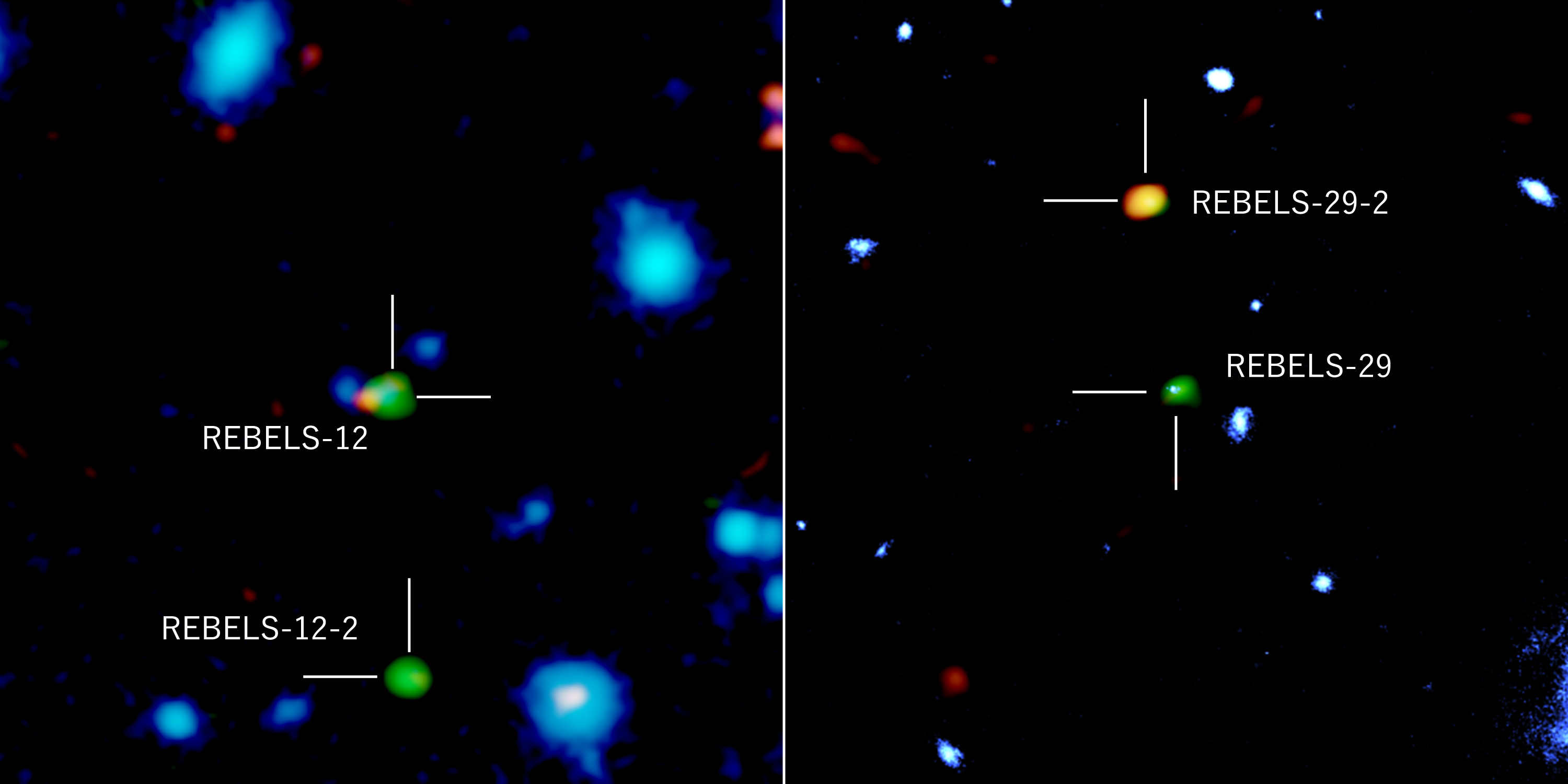 When astronomers peer deep into the night sky, they observe what the Universe looked like a long time ago. Because the speed of light is finite, studying the most distant observable galaxies allows us to glimpse billions of years into the past when the Universe was very young and galaxies had just started to form stars. Studying this “early Universe” is one of the last frontiers in astronomy and is essential for constructing accurate and consistent astrophysics models. A key goal of scientists is to identify all the galaxies in the first billion years of cosmic history and to measure the rate at which galaxies were growing by forming new stars.

Various efforts have been made over the past decades to observe distant galaxies, which are characterized by electromagnetic emissions that become strongly redshifted (shifted towards longer wavelengths) before reaching the Earth. So far, our knowledge of early galaxies has mostly relied on observations with the Hubble Space Telescope (HST) and large ground-based telescopes, which probe their ultra-violet (UV) emission. However, recently, astronomers have started to use the unique capability of the Atacama Large Millimeter/submillimeter Array (ALMA) telescope to study distant galaxies at submillimeter wavelengths. This could be particularly useful for studying dusty galaxies missed in the HST surveys due to the dust absorbing UV emission. Since ALMA observes in submillimeter wavelengths, it can detect these galaxies by observing the dust emissions instead.

In an ongoing large program called REBELS (Reionization-Era Bright Emission Line Survey), astronomers are using ALMA to observe the emissions of 40 target galaxies at cosmic dawn. Using this dataset, they have recently discovered that the regions around some of these galaxies contain more than meets the eye.

While analyzing the observed data for two REBELS galaxies, Dr. Yoshinobu Fudamoto of the Research Institute for Science and Engineering at Waseda University, Japan, and the National Astronomical Observatory of Japan (NAOJ), noticed strong emission by dust and singly ionized carbon in positions substantially offset from the initial targets. To his surprise, even highly sensitive equipment like the HST couldn’t detect any UV emission from these locations. To understand these mysterious signals, Fudamoto and his colleagues investigated matters further.

In their latest paper published in Nature, they presented a thorough analysis, revealing that these unexpected emissions came from two previously unknown galaxies located near the two original REBELS targets. These galaxies are not visible in the UV or visible wavelengths as they are almost completely obscured by cosmic dust. One of them represents the most distant dust-obscured galaxy discovered so far. 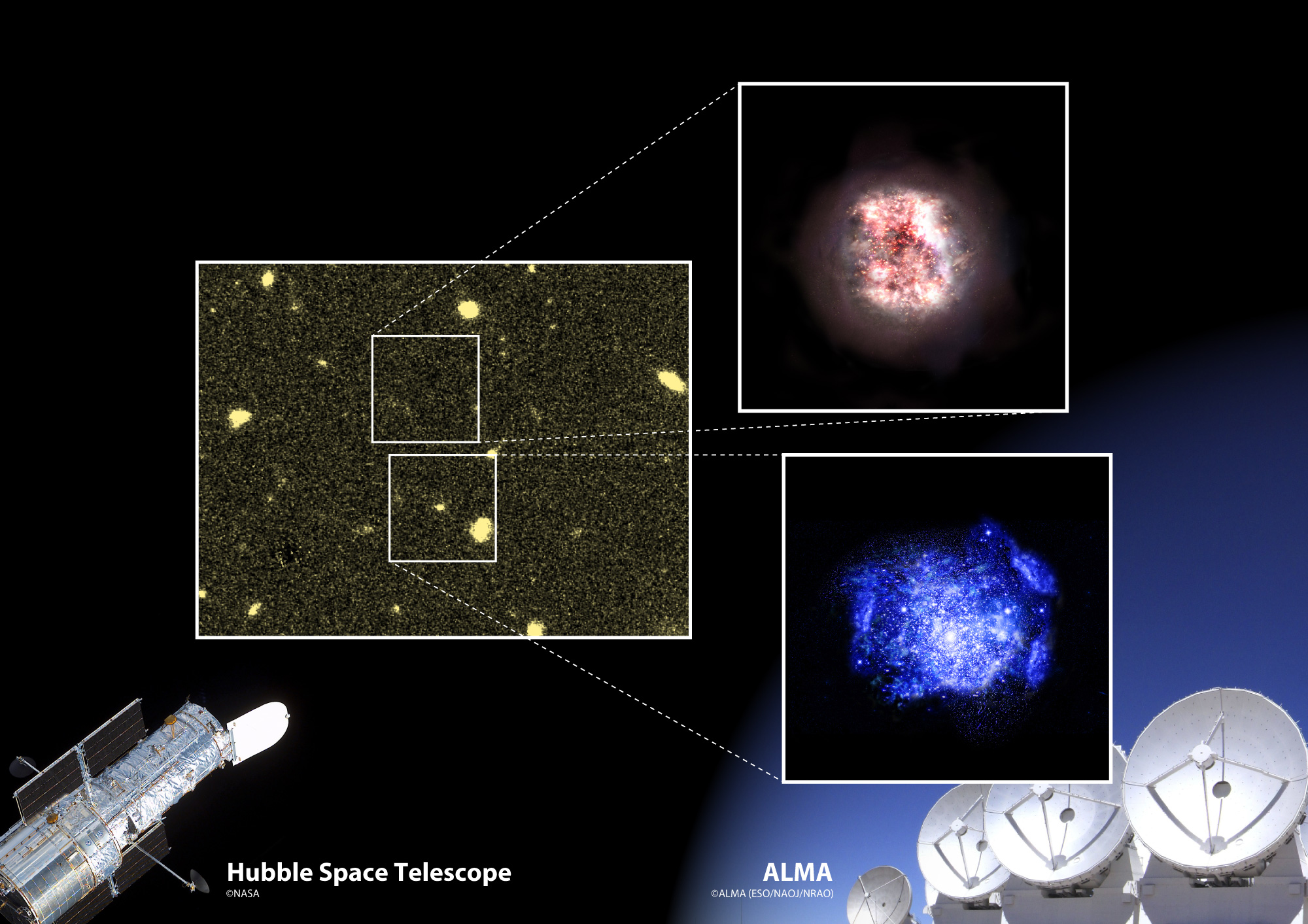 A schematic of the results of this research. ALMA revealed a hitherto undiscovered galaxy as it is buried deep in dust (artist’s impression in upper right) in a region where the Hubble Space Telescope could not see anything (left). Researchers serendipitously discovered the new hidden galaxy while observing an already well-known typical young galaxy (artist’s impression in lower right)
Credit: ALMA (ESO/NAOJ/NRAO), NASA/ESA Hubble Space Telescope

What is most surprising about this serendipitous finding is that the newly discovered galaxies, which formed more than 13 billion years ago, are not strange at all when compared with typical galaxies at the same epoch. “These new galaxies were missed not because they are extremely rare, but only because they are completely dust-obscured,” explains Fudamoto. However, it is uncommon to find such “dusty” galaxies in the early period of the Universe (less than 1 billion years after the Big Bang), suggesting that the current census of early galaxy formation is most likely incomplete, and would call for deeper, blind surveys. “It is possible that we have been missing up to one out of every five galaxies in the early Universe so far,” Fudamoto adds.

The researchers expect that the unprecedented capability of the James Webb Space Telescope (JWST) and its strong synergy with ALMA would lead to significant advances in this field in the coming years. “Completing our census of early galaxies with the currently missing dust-obscured galaxies, like the ones we found this time, will be one of the main objectives of JWST and ALMA surveys in the near future,” states Pascal Oesch from University of Geneva.

Overall, this study constitutes an important step in uncovering when the very first galaxies started to form in the early Universe, which in turn shall help us understand where we are standing today.

Paper Information
These research results are published as Yoshinobu Fudamoto et al. “Normal, Dust-Obscured Galaxies in the Epoch of Reionization” in the journal Nature on September 22, 2021.

The Atacama Large Millimeter/submillimeter Array (ALMA), an international astronomy facility, is a partnership of ESO, the U.S. National Science Foundation (NSF) and the National Institutes of Natural Sciences (NINS) of Japan in cooperation with the Republic of Chile. ALMA is funded by ESO on behalf of its Member States, by NSF in cooperation with the National Research Council of Canada (NRC) and the Ministry of Science and Technology (MOST) and by NINS in cooperation with the Academia Sinica (AS) in Taiwan and the Korea Astronomy and Space Science Institute (KASI).
ALMA construction and operations are led by ESO on behalf of its Member States; by the National Radio Astronomy Observatory (NRAO), managed by Associated Universities, Inc. (AUI), on behalf of North America; and by the National Astronomical Observatory of Japan (NAOJ) on behalf of East Asia. The Joint ALMA Observatory (JAO) provides the unified leadership and management of the construction, commissioning and operation of ALMA.