Two peacock-shaped gaseous clouds were revealed in the Large Magellanic Cloud (LMC) by observations with the Atacama Large Millimeter/submillimeter Array (ALMA). A team of astronomers found several massive baby stars in the complex filamentary clouds, which agrees well with computer simulations of giant collisions of gaseous clouds. The researchers interpret this to mean that the filaments and young stars are telltale evidence of violent interactions between the LMC and the Small Magellanic Cloud (SMC) 200 million years ago. 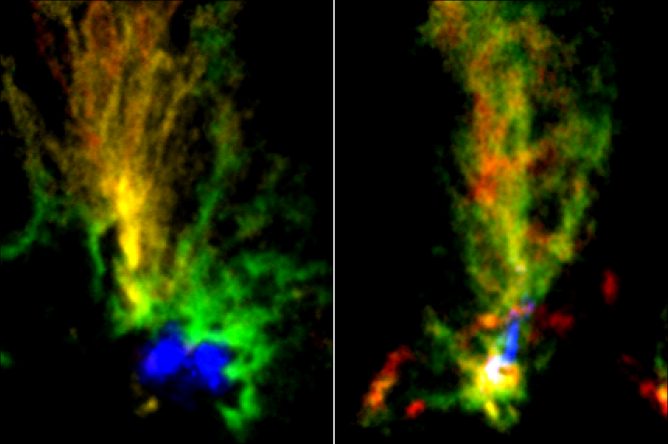 Astronomers know that stars are formed in collapsing clouds in space. However, the formation processes of giant stars, 10 times or more massive than the Sun, are not well understood because it is difficult to pack such a large amount of material into a small region. Some researchers suggest that interactions between galaxies provide a perfect environment for massive star formation. Due to the colossal gravity, clouds in the galaxies are stirred, stretched, and often collide with each other. A huge amount of gas is compressed in an unusually small area, which could form the seeds of massive stars.

A research team used ALMA to study the structure of dense gas in N159, a bustling star formation region in the LMC. Thanks to ALMA’s high resolution, the team obtained a detailed map of the clouds in two sub-regions, N159E-Papillon Nebula and N159W South.

“It is unnatural that in two regions separated by 150 light-years, clouds with such similar shapes were formed and that the ages of the baby stars are similar,” says Kazuki Tokuda, a researcher at Osaka Prefecture University and the National Astronomical Observatory of Japan. “There must be a common cause of these features. Interaction between the LMC and SMC is a good candidate.”

In 2017, Yasuo Fukui, a professor at Nagoya University and his team revealed the motion of hydrogen gas in the LMC and found that a gaseous component right next to N159 has a different velocity than the rest of the clouds. They suggested a hypothesis that the starburst is caused by a massive flow of gas from the SMC to the LMC, and that this flow originated from a close encounter between the two galaxies 200 million years ago.

The pair of peacock-shaped clouds in the two regions revealed by ALMA fits nicely with this hypothesis. Computer simulations show that many filamentary structures are formed in a short time after a collision of two clouds, which also backs this idea.

Artist’s impression of the formation process of peacock-shaped clouds. After the collision of two clouds (left), complicated filamentary structures with a pivot in the bottom are formed in the boundary region (center), and a massive star is formed in the dense part with the ionized region shown in blue (right).。
Credit: NAOJ

Computer simulation movie of a collision of two gaseous clouds by Tsuyoshi Inoue (Nagoya University). A number of filamentary structures are formed at the same time after the collision. This simulation was performed by the supercomputer “ATERUI” operated by the National Astronomical Observatory of Japan.
Download the movie file
Credit: NAOJ/Inoue et al.