TOP
Press Releases
NINS, ESO, and NSF signed the Agreement for the Construct ...

NINS, ESO, and NSF signed the Agreement for the Construction of the Enhanced ALMA

On September 14, the National Institutes of Natural Sciences (on behalf of Japan), the National Science Foundation (on behalf of North America), and the European Southern Observatory (on behalf of Europe) signed an agreement for the joint construction of the enhanced ALMA. The agreement was signed separately in three different places: On August 25, by Catherine Cesarsky (ESO Director General) in Garching, Germany; on September 8, by Arden L. Bement (NSF Acting Director) in Washington D.C.; and on September 14, by Yoshiro Shimura (NINS President) in Tokyo. The conclusion of this agreement opened the way to realize the enhanced ALMA with remarkably stronger observation capability. 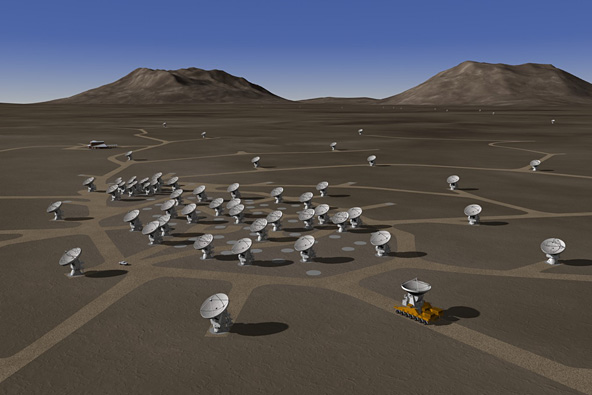 ALMA is an integration of three large-scale projects: the Large Millimeter and Submillimeter Array (LMSA) by NAOJ, the Millimeter Array (MMA) by NRAO, and the Large Southern Array (LSA) by ESO. At first, three parties promoted the three projects independently as their priority astronomical project; however, in April 2001, representatives of the three organizations met in Tokyo and signed an agreement to integrate the three projects into ALMA and to jointly construct and operate it in Chile. The US and Europe secured construction budget ahead of Japan, and signed a bilateral agreement for the joint construction of major subsystem components including 64 12-m antennas and four types of receivers. Later, Canada and Spain joined in this framework. Meanwhile, the NAOJ, working on the design and development of subsystem components from 2002, finally secured the construction budget for ALMA in 2004 with the approval of the Japanese government. By the participation of Japan as the third partner and that of Chile as the host country, the ALMA project has become a big global project, which is not so common in the field of basic science.

Japan (the National Institutes of Natural Sciences, National Astronomical Observatory of Japan: NAOJ) will develop subsystem components including: Atacama Compact Array (ACA) consisting of four 12-m antennas and twelve 7-m antennas; ACA correlator; and three types of receivers including those for submillimeter waves. The ACA System is expected to greatly improve the image fidelity of ALMA by obtaining precise images of extended structures like galaxies and protoplanetary disks. Also, three types of receivers developed by Japan enable observations at additional frequency spectrums including the highest frequency band. This allows exploration of various interstellar molecules and observations of various redshifted distant astronomical objects. With these high-precision components, ALMA will open up new possibility for observations with surprisingly high resolution at submillimeter wavelengths, which will make a great contribution to the study of the formation of galaxies and planetary systems as well as the evolution of interstellar matters.

With this Japanese contribution provided through the NAOJ, Japanese researchers will have access to observations using not only the equipment constructed by Japan but also the entire system of ALMA.

The NAOJ will immediately start the development and manufacture of the assigned subcomponents toward the scheduled early operation (using a limited number of antennas) from the middle of 2007 and regular operation from 2012.

Title of the Agreement

Agreement concerning the construction of the enhanced Atacama Large Millimeter/submillimeter Array (ALMA) between the European Organisations for Astronomical Research in the Southern Hemisphere and the National Science Foundation of the United States and the National Institutes of Natural Sciences of Japan (September 14, 2004) 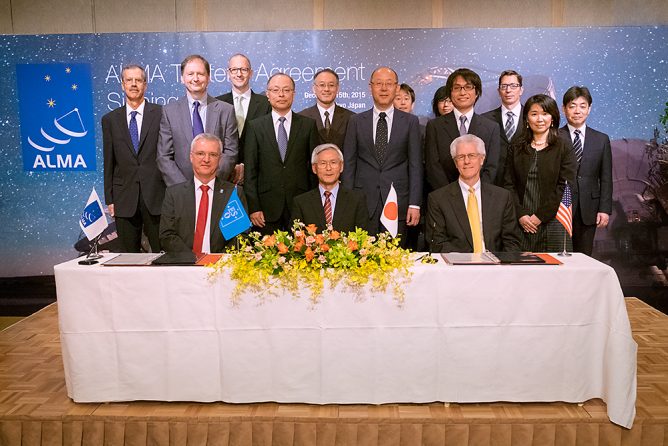