Astronomers using the Atacama Large Millimeter/submillimeter Array (ALMA) detected a clear signal from oxygen in a galaxy located 13.1 billion light-years away from us. This is the most distant oxygen ever detected. Oxygen in this galaxy seems to be ionized by a number of young giant stars, and this detection is a key step to understand the enigmatic “cosmic reionization” in the early history of the Universe. These observations have opened a new window to probe the early Universe with ALMA.

The team observed SXDF-NB1006-2, a galaxy 13.1 billion light-years away, with ALMA. This galaxy was discovered in 2012 by the Subaru Telescope operated by National Astronomical Observatory of Japan (NAOJ) and the following observations with Keck Observatory showed that it was the most distant galaxy known at that time [1]. The Subaru Telescope detected light from ionized hydrogen, but the team aimed to detect light from ionized oxygen and dust particles with ALMA.

“Seeking heavy elements in the early Universe is an essential approach to explore the star formation activity in that period,” said Akio Inoue at Osaka Sangyo University, Japan, the lead author of the research paper which will be published online by the journal Science on Thursday, June 16, 2016.

Various elements are found around us in the present Universe, but just after the Big Bang 13.8 billion years ago only the lightest elements, hydrogen, helium, and lithium, existed. Heavier elements, such as carbon and oxygen, have been formed in stars and accumulated in the Universe over time [2].

“Studying heavy elements also gives us a hint to understand how the galaxies were formed and what caused the cosmic reionization,” added Inoue.

Before the first celestial objects formed, the Universe was filled with electrically neutral gas. Celestial objects emitted strong radiation and started to ionize the neutral gas a few hundred million years after the Big Bang. This is known as “cosmic reionization.” The state of the whole Universe changed dramatically in the cosmic reionization. But, the process is deeply shrouded in darkness. It has been under debate what kind of objects caused the reionization.

Figure 1. Schematic diagram of the history of the Universe. The Universe is in a neutral state at 400 thousands years after the Big Bang and light from the first generation stars starts to ionize the hydrogen. After several hundred million years, the gas in the Universe is completely ionized.
Credit: NAOJ

“We expected that the light from ionized oxygen is strong enough to be observed, even 13 billion light-years away,” explained Hiroshi Matsuo at the NAOJ, “because the Japanese infrared astronomy satellite AKARI has found that this emission is very bright in the Large Magellanic Cloud, which has an environment similar to the early universe.”

Nevertheless, the detection of light from ionized oxygen in very distant galaxies was a new challenge for ALMA. To secure the competitive observation time with ALMA, the researchers first performed large-scale computer simulations of the cosmic evolution to predict the emission brightness. “The simulation showed that the light should be particularly bright and easily detected with ALMA,” said Ikkoh Shimizu at Osaka University, the main contributor to this simulation. 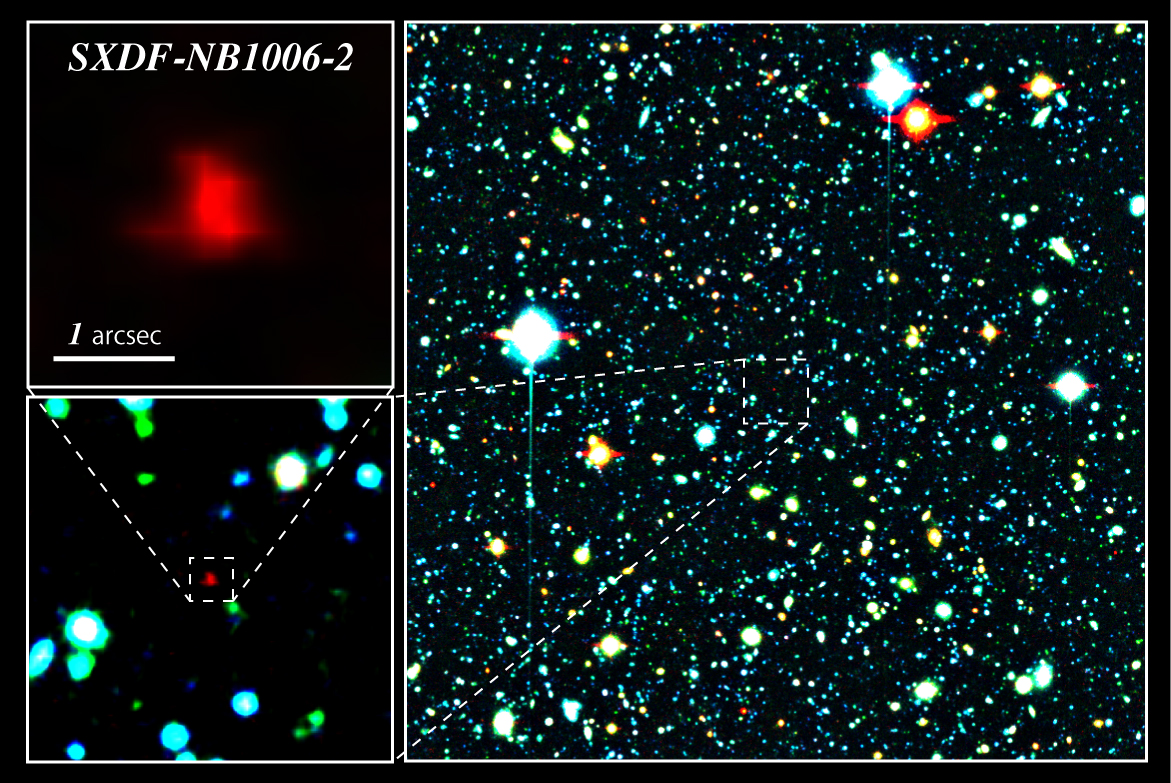 High sensitivity observations with ALMA were performed in June 2015 and the light from ionized oxygen in SXDF-NB1006-2 was definitively detected [3]. This is the most distant detection of oxygen ever achieved and is firm evidence of oxygen in the very early Universe, only 700 million years after the Big Bang [4]. The team estimated that the abundance of oxygen in SXDF-NB1006-2 is ten times smaller than that observed in the Sun. 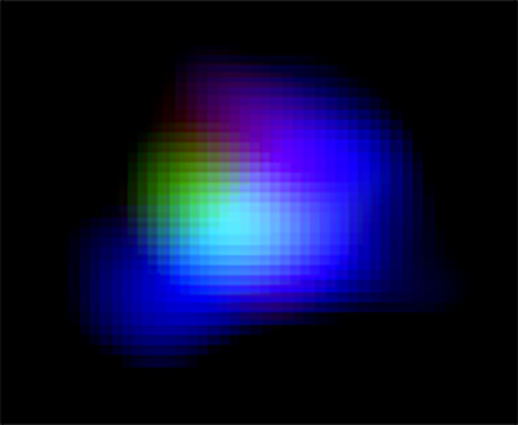 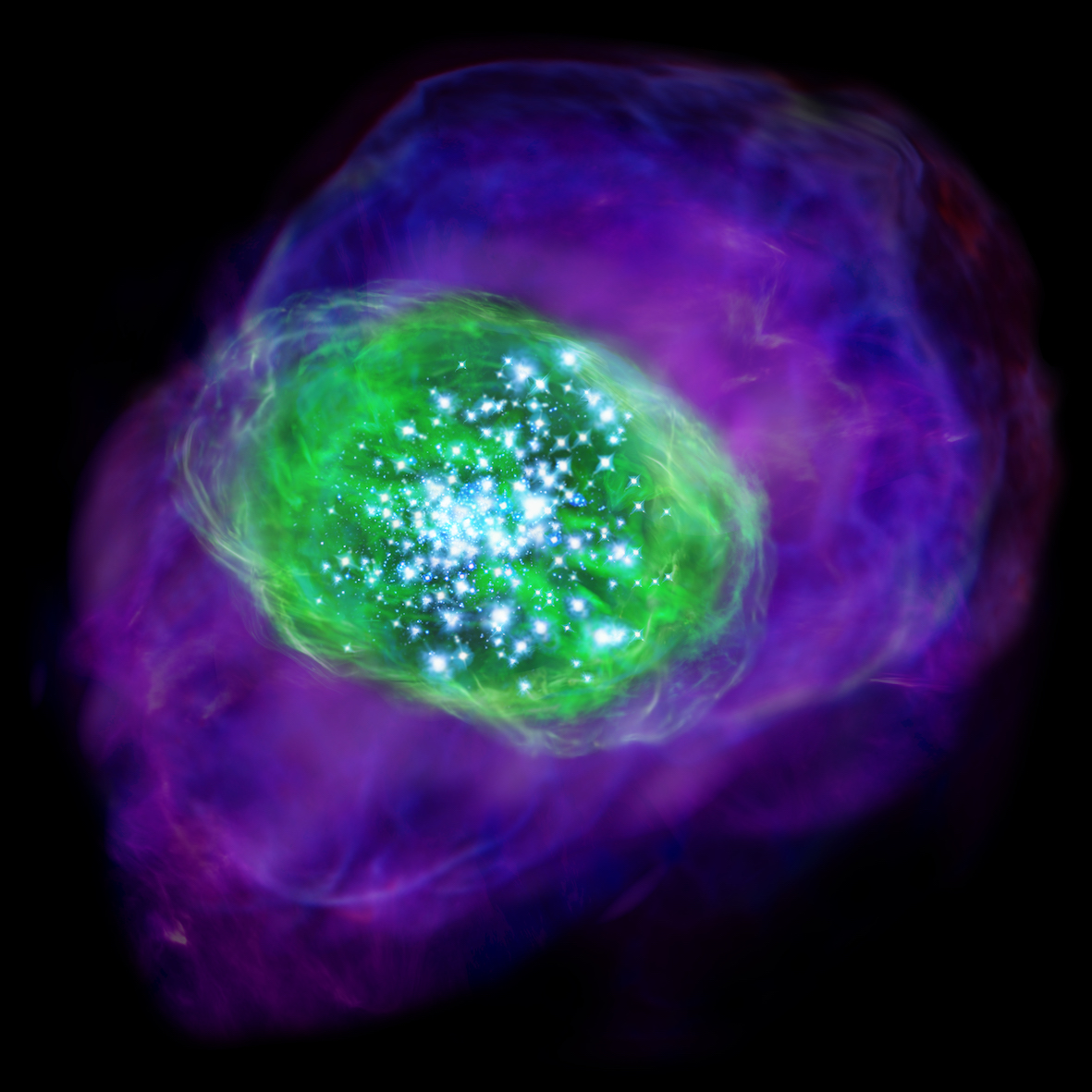 Figure 4. Artist’s concept of SXDF-NB1006-2. Many young bright stars are located in the galaxy and ionize the gas inside and around the galaxy. Green color indicates the ionized oxygen detected by ALMA, whereas purple shows the distribution of ionized hydrogen detected by the Subaru Telescope.
Credit: NAOJ

“The small abundance is expected because the Universe was still young and had a short history of star formation at that time,” commented Naoki Yoshida at the University of Tokyo. “In fact, our simulation predicted an abundance ten times smaller than the Sun. But we have another, unexpected, result: a very small amount of dust.”

The observations show that the amount of heavy elements is about 10% of that found in the present Universe, but the amount of dust, which is made from heavy elements, seems to be much smaller. The team was also unable to detect any emissions from carbon in the galaxy. “Something unusual may be happening in this galaxy,” said Inoue. “I suspect that almost all the gas is highly ionized.”

The emission from ionized oxygen indicates that a number of giant stars, several dozen times heavier than the Sun, have formed in the galaxy and are emitting intense ultraviolet light. The deficits of dust and carbon in the galaxy are crucially important for cosmic reionization to occur. They enable the intense ionizing light to escape from the galaxy and ionize vast amounts of gas outside the galaxy. “SXDF-NB1006-2 would be a prototype of the light sources responsible for the cosmic reionization,” said Inoue. 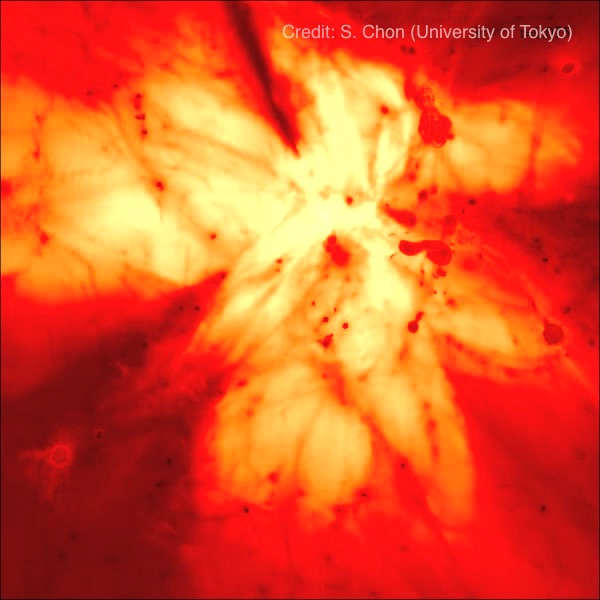 “This is the first step to understanding what kind of objects caused cosmic reionization,” explained Yoichi Tamura at the University of Tokyo. “Our next observations with ALMA have already started. Higher resolution observations will allow us to see the distribution and motion of ionized oxygen in the galaxy and provide precious information to understand the properties of the galaxy.”

[1] See the press release “Discovery of the Most Distant Galaxy in the Cosmic Dawn” (June 3, 2012). The distance stated in that press release is 12.91 billion light-years, but new calculations using the latest cosmological parameters measured with Planck (H0=67.3km/s/Mpc, Ωm=0.315, Λ=0.685: Planck 2013 Results) yield a distance of 13.08 billion light-years. Please refer to “Expressing the distance to remote objects” for the details.

[4] Some earlier work by Finkelstein et al. suggested the presence of oxygen at a slightly earlier time, but there was no direct detection of an emission line, as is the case in the new work.

These observation results were published online as Inoue et al. “Detection of an oxygen emission line from a high redshift galaxy in the reionization epoch” by the journal Science on Thursday, June 16, 2016

This research was supported by the Japan Society for the Promotion of Science through Grants-in-Aid for Scientific Research 26287034, 26247022, 25287050, 24740112, 15H02073, 15K17616 and its Research Fellowship for Young Scientists; The Global COE program “The Next Generation of Physics, Spun from Universality and Emergence” of the Ministry of Education, Culture, Sports, Science and Technology of Japan; the Kavli Institute Fellowship at the Kavli Institute for Cosmology in the University of Cambridge supported by the Kavli Foundation; the Swedish Research 11 Council (project 2011-5349); and the Wenner-Gren Foundation.