A large hot molecular cloud around a very young star was discovered by ALMA. This hot cloud is about ten times larger than those found around typical solar-mass baby stars, which indicates that the star formation process has more diversity than ever thought. This result was published in the Astrophysical Journal Letters on September 20th, 2013. 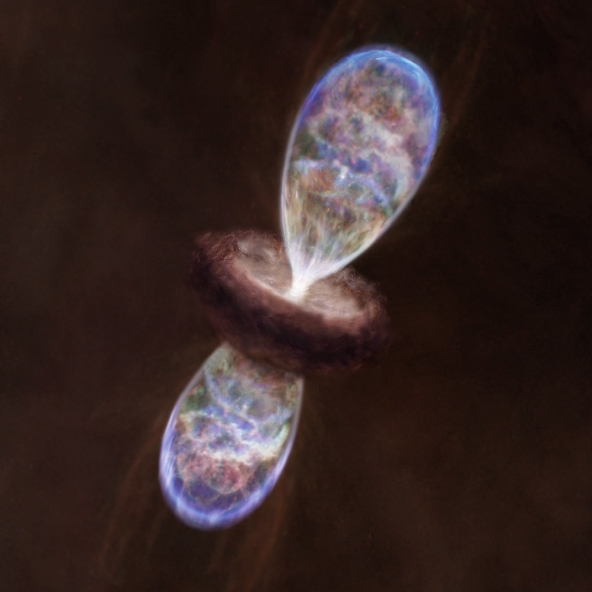 Stars are formed in very cold (-260 degrees Celsius) gas and dust clouds. Infrared Dark Clouds (IRDC) are dense regions of such clouds, and thought that in which clusters of stars are formed. Since most of stars are born as members of star clusters, investigating IRDCs has a crucial role in comprehensive understanding the star formation process.

A baby star is surrounded by the natal gas and dust cloud, and the cloud is warmed up from its center. Temperature of the central part of some, but not all, of such clouds reaches as high as -160 degrees Celsius. Astronomers call those clouds as “hot core” – it may not be hot on the Earth, but is hot enough for a cosmic cloud. Inside hot cores, various molecules, originally trapped in the ice mantle around dust particles, are sublimated. Organic molecules such as methanol (CH3OH), ethyl cyanide (CH3CH2CN), and methyl formate (HCOOCH3) are abundant in hot cores.

International research team, led by Takeshi Sakai at the University of Electro-Communication, Japan, used ALMA to observe an IRDC named G34.43+00.24 MM3 (hereafter MM3) in the constellation Aquila (the Eagle). They discovered a young object from which the methanol molecular line is strongly emitted. A detailed investigation tells them that the temperature of the methanol gas is -140 degrees Celsius. This shows that MM3 harbors a baby star surrounded by a hot core. The size of the hot core is as large as 800 times 300 astronomical units (au, 1 au equals to the mean distance of the Sun and the Earth; 150 million km). Typical size of hot cores around low-mass young stars is several tens to hundred of au, therefore the hot core in MM3 is exceptionally large. Sakai says “Thanks to the high sensitivity and spatial resolution, we need only a few hours to discover a previously unknown baby star. This is an important step to understand the star formation process in a cluster forming region.”

The team also observed radio emission from carbon sulfide (CS) and silicon monoxide (SiO) to reveal the detailed structure of the molecular outflow from the baby star. The speed of the emanated gas is 28 km/s and the extent is 4,400 au. Based on these values, the team calculates the age of the outflow of only 740 years. Although molecular outflows are common features around protostars, the outflow as young as the one in MM3 is quite rare. In summary, ALMA finds that the protostar in MM3 is very young but has a giant hot core.

Why the hot core in MM3 is so large? In order to warm up the large volume of gas, the baby star should emit much more energy than typical ones. Protostars produce emission by converting the gravitational energy of infalling material to the thermal energy. The large size of the hot core in MM3 is possibly due to the high mass infalling rate than ever thought. The other possibility is that two or more protostars are embedded in the hot core. The research team has not reached the reason with this observation yet. “ALMA’s spatial resolution improves much more in the near future”, Sakai says, “Then much detail of the infalling material toward the protostar can be revealed, and it helps us answer to the mystery behind the diversity in star formation.”

The research findings are presented in the article “ALMA Observations of the IRDC Clump G34.43+00.24 MM3: Hot Core and Molecular Outflows”, published in the Astrophysical Journal Letters, Vol. 775, of September 20, 2013. 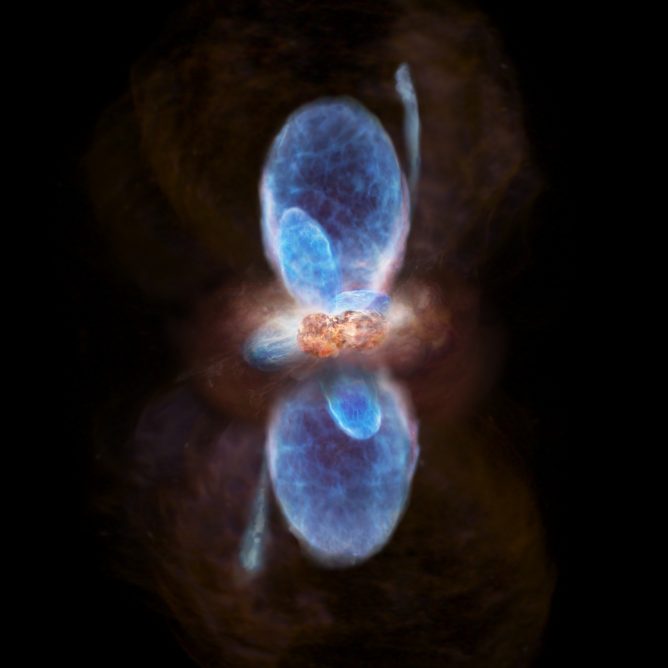 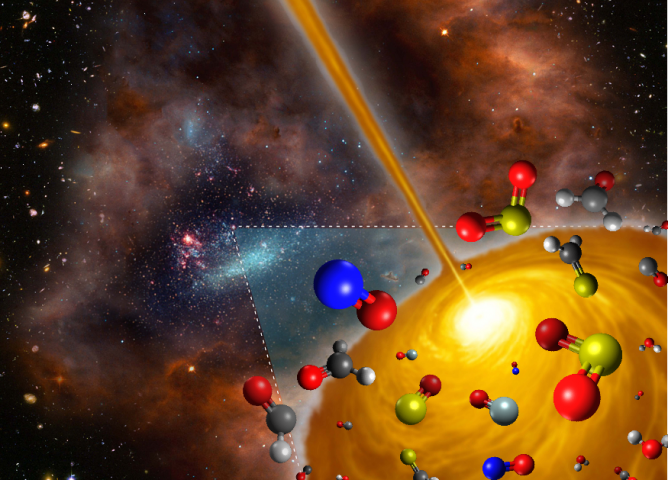