On March 13th, in a remote part of the Chilean Andes, the Atacama Large Millimeter/submillimeter Array (ALMA), was inaugurated at an official ceremony. This event marks the completion of all the major systems of the giant telescope, and the formal transition from a construction project to a fully fledged observatory. ALMA is a partnership between East Asia, Europe, and North America in cooperation with the Republic of Chile. 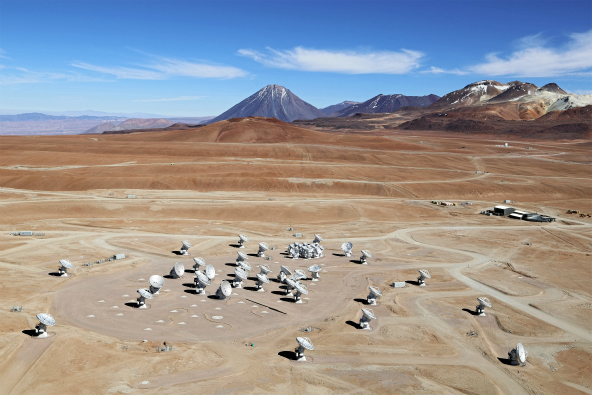 Figure 1. ALMA array from the air
This image shows an aerial view of the Chajnantor Plateau, located at an altitude of 5000 meters in the Chilean Andes, where the array of ALMA antennas is located. The large antennas have a diameter of 12 metres, while 12 smaller antennas with a diameter of 7 metres make up the ALMA Compact Array (ACA). On the horizon, the main peaks from right to left are Cerro Chajnantor, Cerro Toco, and Juriques. This photo was taken in December 2012, four months prior to the ALMA inauguration.
Credit: Clem & Adri Bacri-Normier (wingsforscience.com)/ESO

ALMA’s three international partners welcomed more than 350 people to the ALMA Observatory in the Chilean Atacama Desert to celebrate the success of the project. The guest of honor was the President of Chile, Sebastián Piñera. 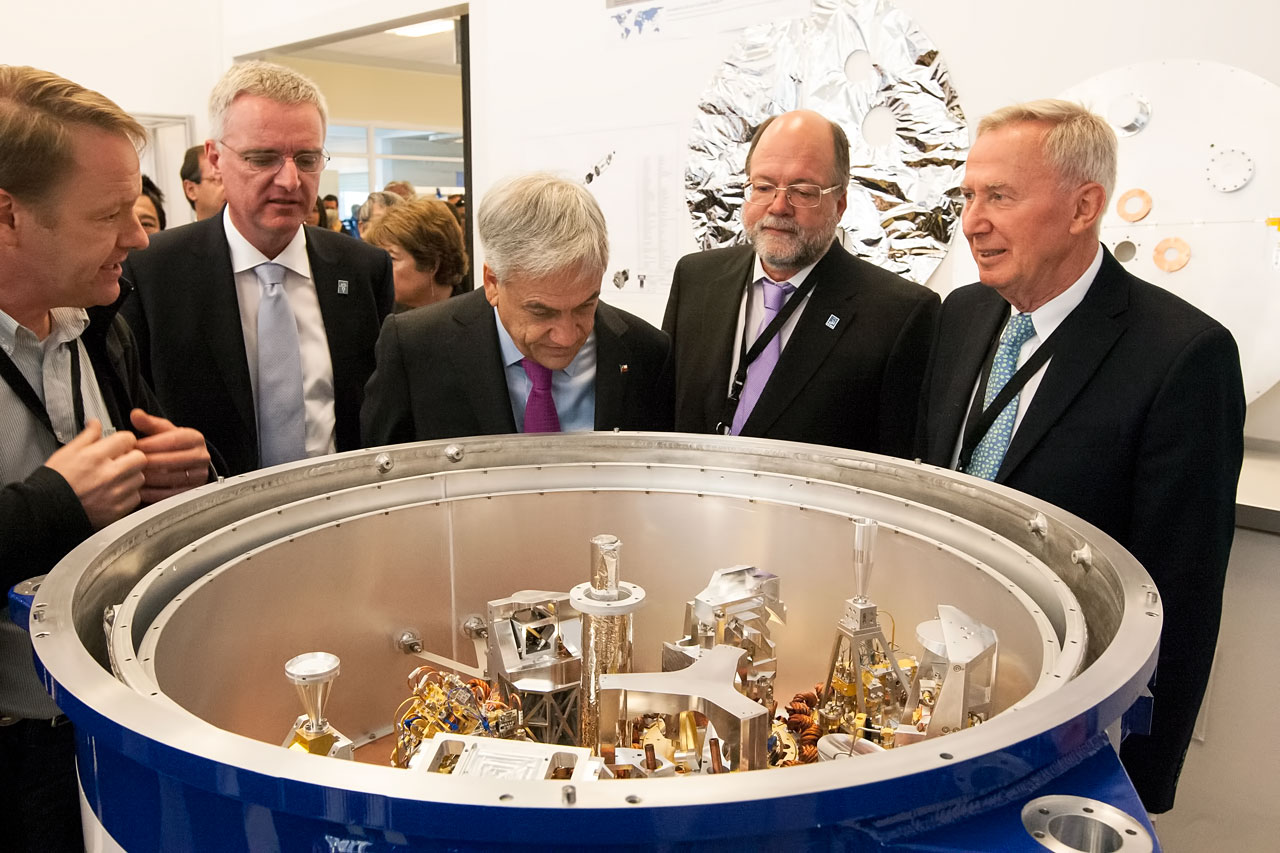 Click to Enlarge (JPEG/ 223.5KB)
Figure 2. Highlight of the ALMA inauguration — President Piñera
On 13 March 2013 the Atacama Large Millimeter/submillimeter Array (ALMA) was inaugurated at an official ceremony in the Chilean Andes, marking the completion of all the major systems of the giant telescope and the formal transition from a construction project to a fully fledged observatory.
The picture shows the President of Chile, Sebastián Piñera, guest of honor of the ceremony, inspecting some of the sophisticated ALMA hardware. Shown from left to right are: David Rabanus, Instrument Group Manager, ALMA Department of Engineering, Tim de Zeeuw, ESO Director General, President Sebastián Piñera, Lars Nyman, Head of ALMA Science Operations and Thijs de Graauw, ALMA Director.
Credit: ALMA (ESO/NAOJ/NRAO)

Among the distinguished guests at the celebration were Teru Fukui, the Senior Vice Minister of the Ministry of Education, Culture, Sports, Science and Technology (MEXT), Ministers from European partner countries, and ambassadors to Chile from Japan, Austria, Belgium, the Czech Republic, France, Italy, Germany, the Netherlands, Portugal, Sweden, Switzerland, the United Kingdom and the United States of America.

The President of Chile, Sebastián Piñera, said: “One of our many natural resources is Chile’s spectacular night sky. I believe that science has been a vital contributor to the development of Chile in recent years. I am very proud of our international collaborations in astronomy, of which ALMA is the latest, and biggest outcome.”

At the ceremony, which was broadcast live on the Internet, representatives of ALMA’s international partners were also present: ESO’s Director General, Tim de Zeeuw, the Director of the USA’s National Science Foundation, Subra Suresh, and the Senior Vice Minister of Japan’s MEXT, Teru Fukui, along with the Director of ALMA, Thijs de Graauw. ALMA executives, personnel and representatives of neighboring communities also attended the event.

Thijs de Graauw expressed his expectations for ALMA. “Thanks to the efforts and countless hours of work by scientists and technicians in the ALMA community around the world, ALMA has already shown that it’s the most advanced millimeter/submillimeter telescope in existence, dwarfing anything else we had before. We are eager for astronomers to exploit the full power of this amazing tool.”

“ALMA is a 30 years-long dream for Japanese radio astronomers,” added Masahiko Hayashi, NAOJ’s Director General. “Originally, Japanese scientists discussed building the next-generation radio telescope on their own. However, this global endeavor undertaken with European, North American, and Taiwanese partners makes the dream observatory much more powerful than the original blueprint. With ALMA, we can see how planets are formed in the solar vicinity and how the galaxies are formed in the dusty cloud in the early Universe.” 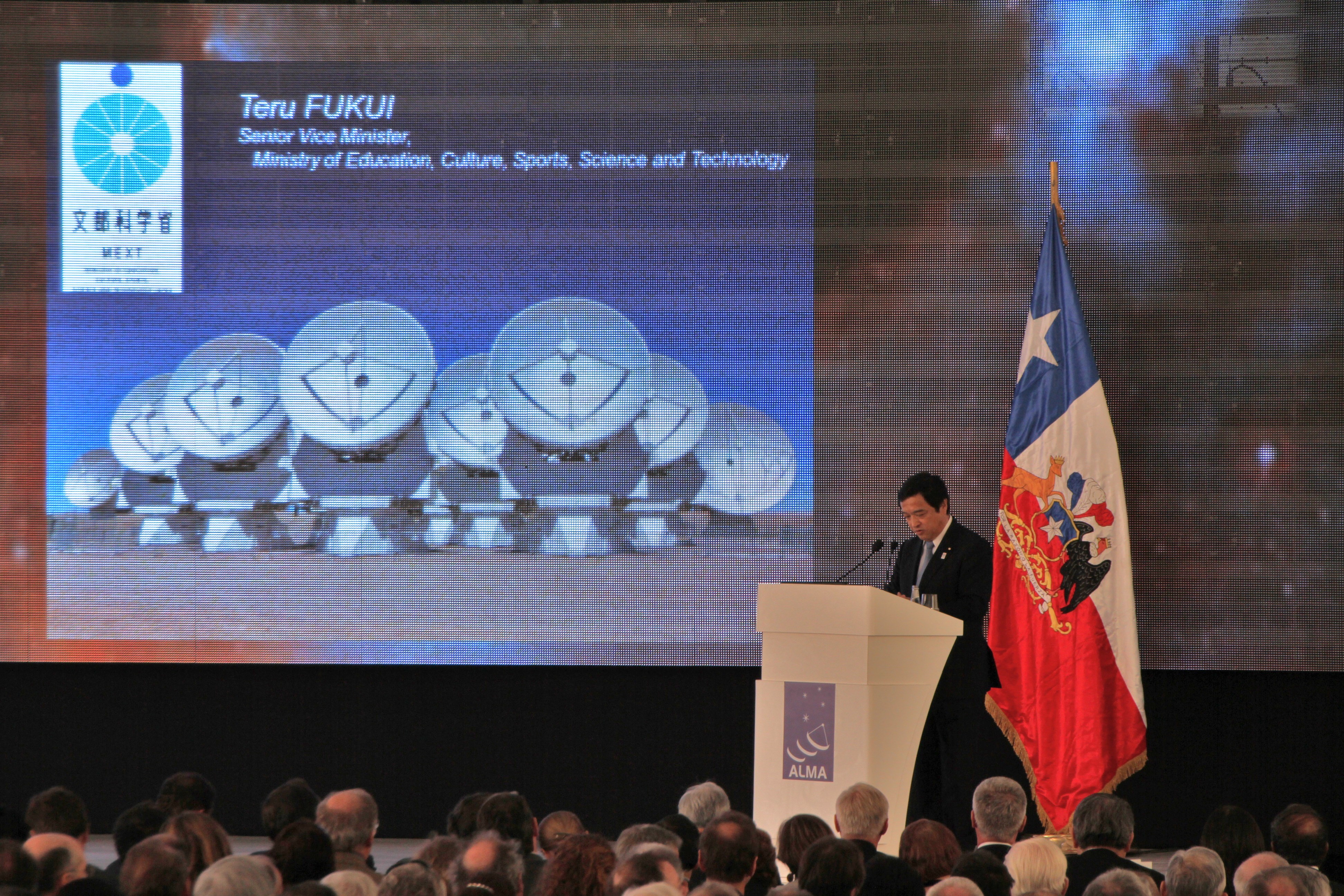 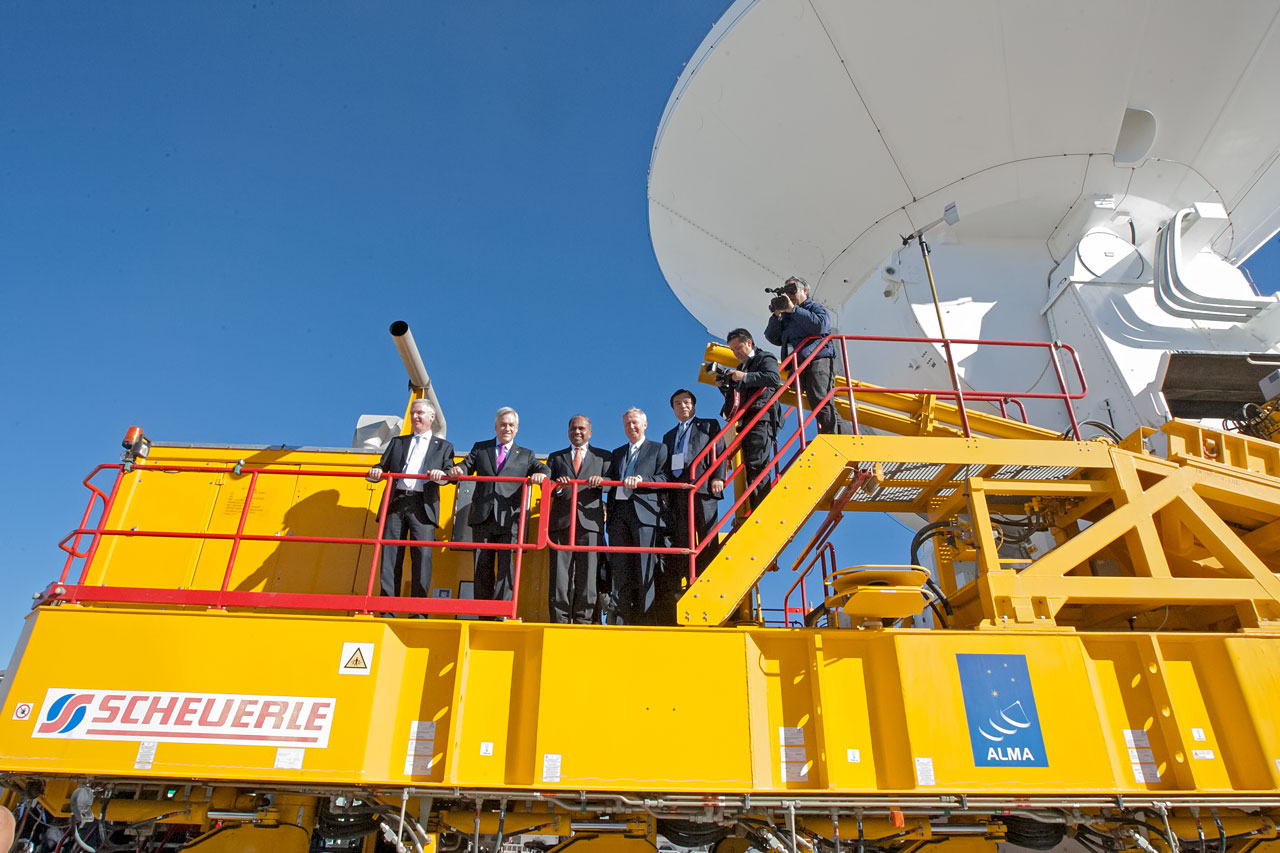 Figure 3. Guests at the ALMA inauguration on a transporter
In the picture, some of the guests attending the ceremony are shown on one of the huge ALMA transporters. From left to right: Tim de Zeeuw, ESO Director General, the President of Chile, Sebastián Piñera, the director of the USA’s National Science Foundation (NSF) Subra Suresh, the director of ALMA Thijs de Graauw, and the Senior Vice Minister of Japan’s MEXT (Ministry of Education, Culture, Sports, Science and Technology) Teru Fukui.
Credit: ALMA (ESO/NAOJ/NRAO)

Capable of observing the Universe by detecting light that is invisible to the human eye, ALMA will show us never-before-seen details of the birth of stars, infant galaxies in the early Universe, and planets coalescing around distant suns. It also will discover and measure the distribution of molecules–many essential for life–that form in the space between the stars.

The antennas of the ALMA array, fifty-four 12-meter and twelve smaller 7-meter dish antennas, work together as a single telescope. Each antenna collects radiation coming from space and focuses it onto a receiver. The signals from the antennas are then brought together and processed by specialized supercomputers: the ALMA correlator and ACA correlator.

The observatory was conceived in the 1980s as three separate projects in Europe, the USA and Japan, and merged into a single project in the 1990s. Japan is responsible for developing and delivering 16 out of 66 high-precision antennas, called Atacama Compact Array (ACA) receiver cartridges for three frequency bands, and the ACA correlator which processes the massive data corrected by the ACA. Also, more than 10 astronomers and engineers from Japan are working as international staff in the Joint ALMA Observatory/Office. 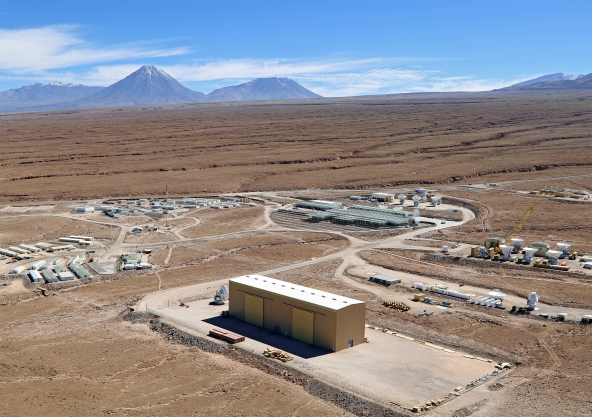 Figure 4. Aerial view of the Operations Support Facility (OSF)
This aerial view shows the ALMA Operations Support Facility (OSF), located at an altitude of 2900 metres in the Atacama Desert in Chile. It is where the offices, laboratories and telescope control room are located, as well as the site where the antennas are assembled and tested by the European, Japanese and North American partners, before being taken to their final destination on the Chajnantor Plateau. In the distance, on the left hand side of the image, the distinctive conical volcano Licancabur dominates the landscape.
Credit: Clem & Adri Bacri-Normier (wingsforscience.com)/ESO

The assembly of ALMA’s antennas has been almost completed, with the last batch of seven out of the final total of 66 antennas currently being tested before entering into service. The telescope has already provided unprecedented views of the cosmos with only a portion of its full array [1]. From 2013, the ACA is used in science observations. By adding the ACA to the 12-meter array, astronomers are able to measure the intensity of the radio waves coming from extended diffuse objects, such as stellar nursery clouds and gas in the galaxy arms.

On the occasion of the inauguration, the ALMA partners including the NAOJ, the European Southern Observatory and the National Radio Astronomy Observatory are releasing a 16-minute movie called ALMA — In Search of Our Cosmic Origins, a photo book, a booklet about ethno-astronomy in the area and two brochures about the project and the contributions of the executives. All materials are available for download in electronic form at the links below. 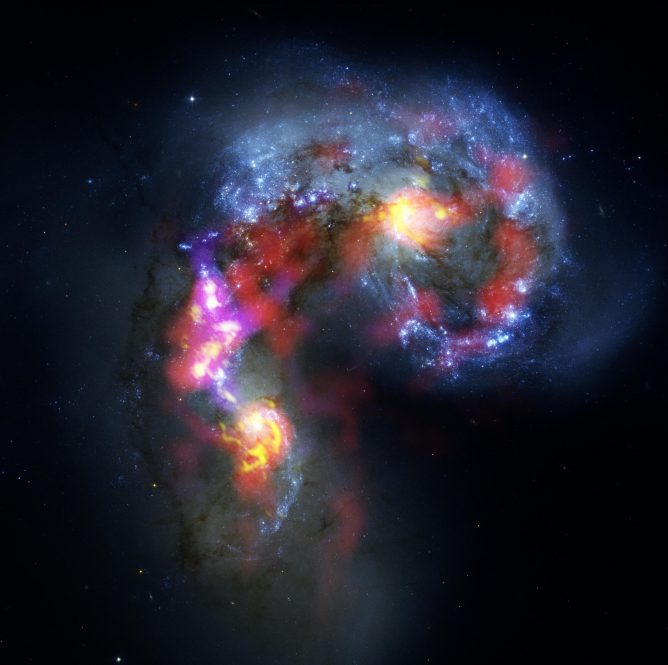