Astronomers obtained the first resolved image of disturbed gaseous clouds in a galaxy 11 billion light-years away by using the Atacama Large Millimeter/submillimeter Array (ALMA). The team found that the disruption is caused by young powerful jets ejected from a supermassive black hole residing at the center of the host galaxy. This result will cast light on the mystery of the evolutionary process of galaxies in the early Universe.

It is commonly known that black holes exert strong gravitational attraction on surrounding matter. However, it is less well known that some black holes have fast-moving streams of ionized matter, called jets. In some nearby galaxies, evolved jets blow off galactic gaseous clouds, resulting in suppressed star formation. Therefore, to understand the evolution of galaxies, it is crucial to observe the interaction between black hole jets and gaseous clouds throughout cosmic history. However, it had been difficult to obtain clear evidence of such interaction, especially in the early Universe.

In order to obtain such clear evidence, the team used ALMA to observe an interesting object known as MG J0414+0534. A distinctive feature of MG J0414+0534 is that the paths of light traveling from it to Earth are significantly distorted by the gravity of another ‘lensing’ galaxy between MG J0414+0534 and us, causing significant magnification.

“This distortion works as a ‘natural telescope’ to enable a detailed view of distant objects,” says Takeo Minezaki, an associate professor at the University of Tokyo.

Another feature is that MG J0414+0534 has a supermassive black hole with bipolar jets at the center of the host galaxy. The team was able to reconstruct the ‘true’ image of gaseous clouds as well as the jets in MG J0414+0534 by carefully accounting for the gravitational effects exerted by the intervening lensing galaxy.

“Combining this cosmic telescope and ALMA’s high-resolution observations, we obtained exceptionally sharp vision, that is 9,000 times better than human eyesight,” adds Kouichiro Nakanishi, a project associate professor at the National Astronomical Observatory of Japan/SOKENDAI. “With this extremely high resolution, we were able to obtain the distribution and motion of gaseous clouds around jets ejected from a supermassive black hole.”

Thanks to such a superior resolution, the team found that gaseous clouds along the jets have violent motion with speeds as high as 600 km/s, showing clear evidence of impacted gas. Moreover, it turned out that the size of the impacted gaseous clouds and the jets are much smaller than the typical size of a galaxy at this age.

“We are perhaps witnessing the very early phase of jet evolution in the galaxy,” says Satoki Matsushita, a research fellow at Academia Sinica Institute of Astronomy and Astrophysics. “It could be as early as several tens of thousands of years after the launch of the jets.”

“MG J0414+0534 is an excellent example because of the youth of the jets,” summarizes Kaiki Inoue, a professor at Kindai University, Japan, and the lead author of the research paper which appeared in the Astrophysical Journal Letters. “We found telltale evidence of significant interaction between jets and gaseous clouds even in the very early evolutionary phase of jets. I think that our discovery will pave the way for a better understanding of the evolutionary process of galaxies in the early Universe.” 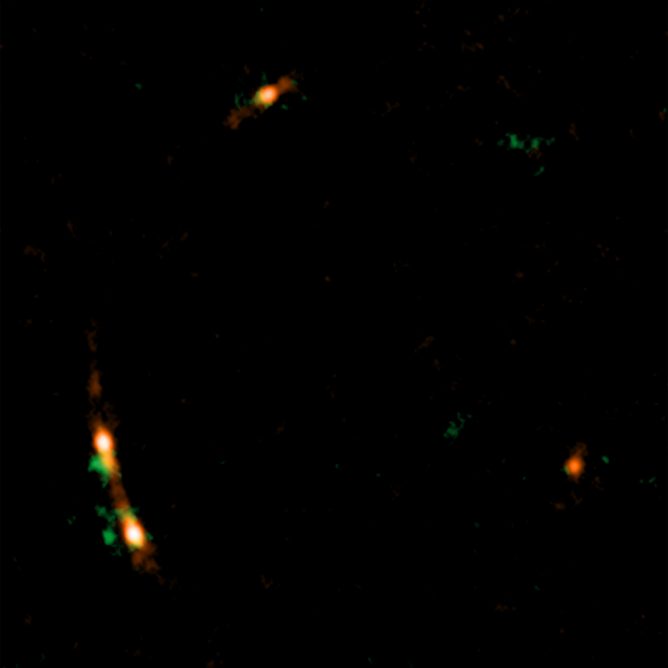