An international team of astronomers has discovered the most distant quasar yet found — a cosmic monster more than 13 billion light-years from Earth powered by a supermassive black hole more than 1.6 billion times more massive than the Sun and more than 1,000 times brighter than our entire Milky Way Galaxy.
share
tweet 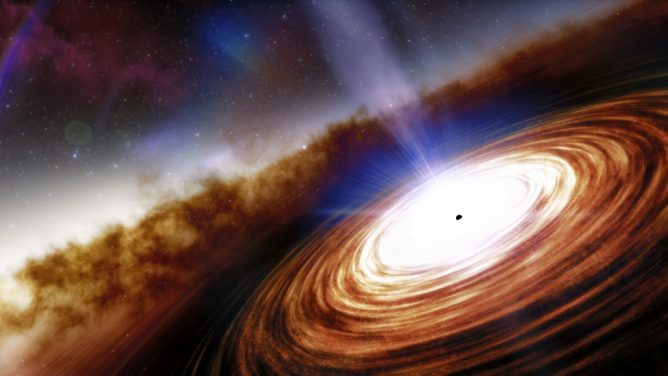 Artist’s conception of the quasar J0313–1806, seen as it was only 670 million years after the Big Bang.
Credit: NOIRLab/NSF/AURA/J. da Silva

The quasar, called J0313–1806, is seen as it was when the Universe was only 670 million years old and is providing astronomers with valuable insight on how massive galaxies — and the supermassive black holes at their cores — formed in the early Universe. The scientists presented their findings to the American Astronomical Society’s meeting, now underway virtually, and in a paper accepted to the Astrophysical Journal Letters.

The new discovery beats the previous distance record for a quasar set three years ago. Observations with the Atacama Large Millimeter/submillimeter Array (ALMA) in Chile confirmed the distance measurement to high precision.

Quasars occur when the powerful gravity of a supermassive black hole at a galaxy’s core draws in surrounding material that forms an orbiting disk of superheated material around the black hole. The process releases tremendous amounts of energy, making the quasar extremely bright, often outshining the rest of the galaxy.

The black hole at the core of J0313–1806 is twice as massive as that of the previous record holder and that fact provides astronomers with a valuable clue about such black holes and their affect on their host galaxies.

“This is the earliest evidence of how a supermassive black hole is affecting the galaxy around it,” said Feige Wang, a Hubble Fellow at the University of Arizona’s Steward Observatory and leader of the research team. “From observations of less distant galaxies, we know that this has to happen, but we have never seen it happening so early in the Universe.”

The huge mass of J0313–1806’s black hole at such an early time in the Universe’s history rules out two theoretical models for how such objects formed, the astronomers said. In the first of these models, individual massive stars explode as supernovae and collapse into black holes that then coalesce into larger black holes. In the second, dense clusters of stars collapse into a massive black hole. In both cases, however, the process takes too long to produce a black hole as massive as the one in J0313-1806 by the age at which we see it.

“This tells you that no matter what you do, the seed of this black hole must have formed by a different mechanism,” said Xiaohui Fan, also of the University of Arizona. “In this case, it’s a mechanism that involves vast quantities of primordial, cold hydrogen gas directly collapsing into a seed black hole.”

The ALMA observations of J0313–1806 provided tantalizing details about the quasar host galaxy, which is forming new stars at a rate 200 times that of our Milky Way. “This is a relatively high star formation rate in galaxies of similar age, and it indicates that the quasar host galaxy is growing very fast,” said Jinyi Yang, the second author of the report, who is a Peter A. Strittmatter Fellow at the University of Arizona.

The quasar’s brightness indicates that the black hole is swallowing the equivalent of 25 Suns every year. The energy released by that rapid feeding, the astronomers said, probably is powering a powerful outflow of ionized gas seen moving at about 20 percent of the speed of light.

Such outflows are thought to be what ultimately stops star formation in the galaxy.

“We think those supermassive black holes were the reason why many of the big galaxies stopped forming stars at some point,” Fan said. “We observe this ‘quenching’ at later times, but until now, we didn’t know how early this process began in the history of the Universe. This quasar is the earliest evidence that quenching may have been happening at very early times.”

This process also will leave the black hole with nothing left to eat and halt its growth, Fan pointed out.

In addition to ALMA, the astronomers used the 6.5-meter Magellan Baade telescope, the Gemini North telescope and W.M. Keck Observatory in Hawaii, and the Gemini South telescope in Chile.

The astronomers plan to continue studying J0313-1806 and other quasars with ground-based and space-based telescopes.

Paper Information
These research results are presented in Feige Wang et al. “A Luminous Quasar at Redshift 7.642” accepted by the Astrophysical Journal Letters.