Stars are known to form in so-called “molecular clouds”; collections of cold gas and dust in the space between stars. These stellar nurseries can contain a number of dense clumps of gas and dust called “prestellar cores". Research has suggested that these cores are expected to exhibit concentrated structures within them - the “seeds” of new stars right at the cusp of being born.
share
tweet 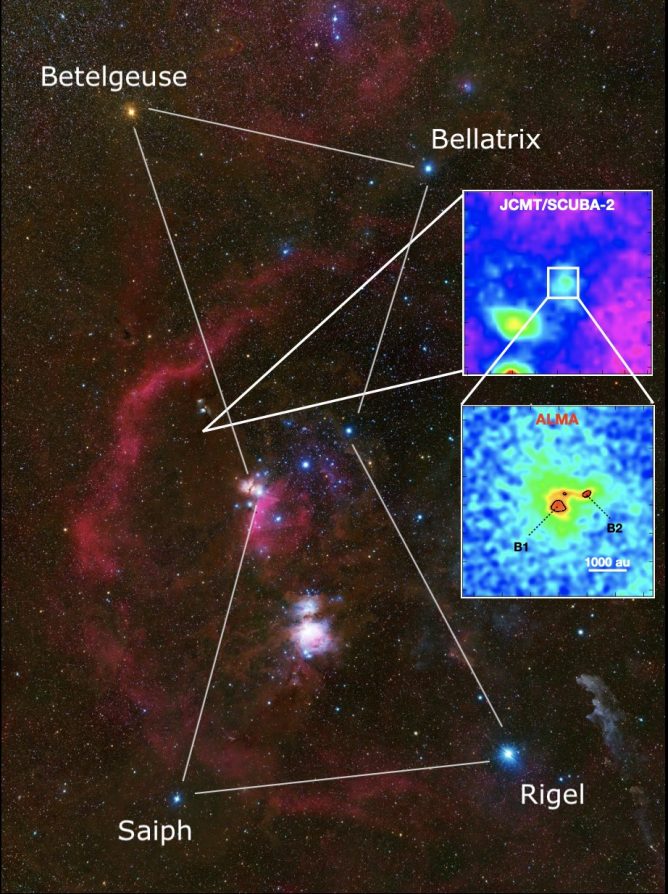 Strong efforts by astronomers have been made to find such “seeds” of stars inside prestellar cores in the past, but mostly in vain. It was difficult to catch such seeds in action perhaps because they are short-lived, but also due to the inherent difficulties in observing such dense regions and at such small scales.

Despite the challenges, Dipen Sahu, at the Academia Sinica Institute of Astronomy and Astrophysics (ASIAA), Taiwan, and lead author of this study stated that “it is very important to understand when and how such stellar embryo(s) come to live” noting that “it is this critical early stage that is important to observe as we understand how these early stages shape the stellar offspring. We would like to know how stellar systems are formed, but we need to study them near their birth to fully understand the process.”

One of the closest, brightest and most well known stellar nurseries can be found in the constellation of Orion also known as the “Hunter”. The international team, including astronomers from Taiwan, China, Japan, and Korea, first started out to uncover cold and dense cores in the Orion Molecular Cloud. As dust in the cores absorbs light and blocks the view at the optical wavelengths, astronomers make use of “light” emitted by the dust inside the dense cores at submillimeter wavelengths, obtained using such telescopes as the James Clark Maxwell Telescope (JCMT) situated on the slopes of Maunakea in Hawaii.

“The JCMT continues to play a pivotal role in locating these cores!”, says Tie Liu at Shanghai Astronomical Observatory, co-author of this study and the principal investigator of the ALMA observation program, “the JCMT is critical in that it gives us the speed to hunt around these stellar nurseries with the sensitivity needed to find these faint regions of cold and dense gas”.

With JCMT providing the team with stellar nursery candidates, the team turned to the largest telescope on the ground to date, the Atacama Large Millimeter and submillimeter Array (ALMA) located in the high desert in northern Chile. The observations carried out with ALMA in late 2018 to early 2019 unveil to the team five cores with a very concentrated gas and dust distribution at a scale of a 1000 AU. Toward one core named “G205.46-14.56M3” in particular, the image shows signs of multiple small peak structures inside. These peaks are estimated to harbor a high density of cold gas that has never been seen before and their significant mass makes astronomers think that they are very likely to form a binary star system in the future. It is known that a large fraction of Sun-like stars is in binary or multiple stellar systems.

Sheng-Yuan Liu at ASIAA, co-author of this study stated “ALMA provides us with unprecedented sensitivity and angular resolution so that we can see faint sources with truly sharp images. Finding twins or triplets should be common in stellar nurseries but it is remarkable to actually obtain the image like seeing inside an egg with two yolks!”

It remains unclear what leads to the sub-structures we see in the core of G205.46-14.56M3. The substructures are likely a complicated interplay between the gas motion, gravity, and magnetic fields that are threading through the gas. The observed emission from the dust only tells us how gas and dust are distributed. Understanding how the gas is moving and how magnetic fields are distributed inside such cores would allow astronomers to further pinpoint the decisive process.

“Detecting such a handful of stellar seeds is just the beginning. I am excited to see what new discoveries we will make when we combine the power of both JCMT and future follow-up studies with ALMA”, says Dipen Sahu.

This article is based on the ASIAA Science Highlights issued on February 22, 2021.