Although July is in the middle of winter in the southern hemisphere, TANABATA, a star festival of summer, is still an important annual event for the local Japanese community. To coincide with the “Nationwide Simultaneous TANABATA Lectures” organized by the Astronomical Society of Japan (ASJ), the NAOJ Chile Observatory held two lectures in Santiago, Chile.

The annual TANABATA special lecture at the Santiago Japanese School was held on July 5. The city had a week-long rainy weather prior to the event and the weather was not perfect for a star festival with rain from the afternoon, however the students from the 1st to 9th grades looked amazingly vibrant. This year’s lecture titled “The Eye to See the Universe: Telescopes” was given by Yoshiharu Asaki, an associate professor at the NAOJ/Joint ALMA Observatory (JAO), explaining how the universe can be observed at different wavelengths from optical, radio to gamma ray, and the latest satellite technology to observe the universe from space telescopes. Students listened very attentively to the talk about the star-forming regions observed at millimeter wavelength and the supermassive black hole at the center of a galaxy. While elementary school kids were giving spirited replies in answering the name of a planet of our solar system to the question by the speaker, junior high students were asking challenging questions about cutting-edge space science research. Such exchanges with students were very enjoyable for the speaker too. 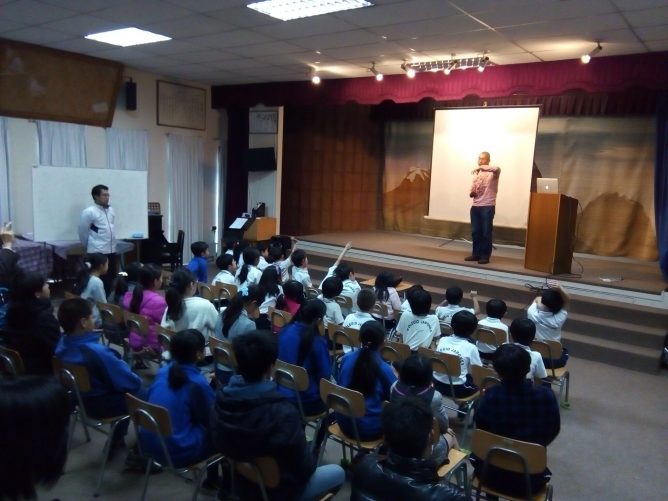 On July 7, the NAOJ Chile Observatory held a lecture/star party at the women’s club (called “Copihue Club”, which was named after the national flower of Chile) of the Japan-Chile Chamber of Commerce and Industry. During recent years, the Copihue Club organizes lectures on astronomy and star parties for the club members in cooperation with NAOJ in various occasions such as the one at the Japan-Chile Cultural Center in Santiago in November 2016, and the other at the residence of the NAOJ Chile Observatory Director in May 2017. The lecture titled “TANABATA Lecture for Adults” was given by the NAOJ Chile Observatory Director Seiichi Sakamoto at the NAOJ Santiago office with attendance of 45 people including the Japanese Ambassador to Chile Yoshinobu Hiraishi and his wife. In the lecture, Sakamoto covered a variety of topics which include: the differences between the TANABATA star festival in the Gregorian calendar and the traditional TANABATA in the Chinese calendar; the similarities between the love story passed down as an oral tradition in the mountains of the Atacama region and the legend of TANABATA; Inca’s dark constellations delineated by the dark blotches on the Milky Way, Hershel‘s vision of the universe; and the new discovery about the Milky Way Galaxy. After the lecture, the participants enjoyed a star party observing Jupiter through the clouds on the roof terrace at the Director’s residence with home-made meals cooked by the Director and club members. Many of the participants are members who regularly attend the monthly star parties at the Director’s residence. Star watching has been gradually taking root in the Japanese community in Chile as a new culture. 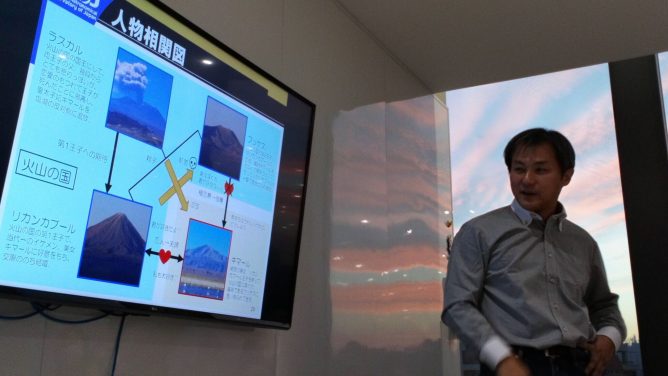 Director Sakamoto introducing the story of the mountains in the Atacama region
Credit: NAOJ