A research team led by Tomohiro Yoshida, a graduate student at The Graduate University for Advanced Studies in Japan, has discovered that the abundances of different molecular species vary significantly around the site of planet formation by using ALMA data. Using a newly-developed method, the team measured the carbon monoxide isotopologue ratio, which can be used as a new "fingerprint" to trace the origins of materials, in the protoplanetary disk around the star TW Hydrae. The team found significant differences in this ratio depending on the region. This new "fingerprint" would provide a new method for understanding where and how the materials of the Solar System and exoplanets were created and transported.
share
tweet 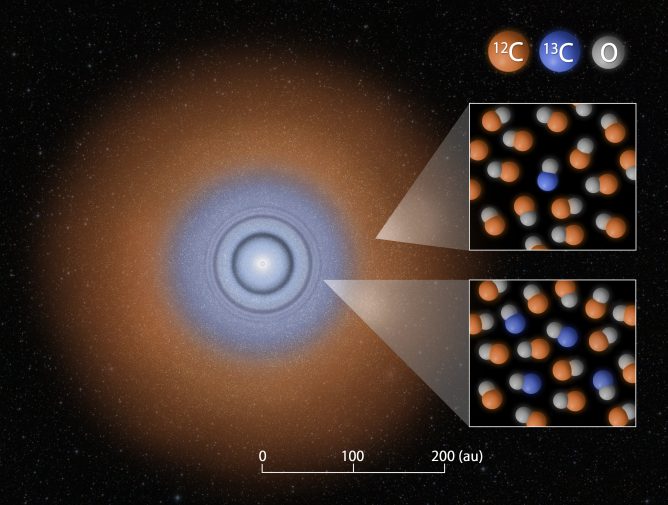 A schematic view of carbon isotope ratios in the protoplanetary disk around the star TW Hydrae. The ratio of 13CO to 12CO is higher in the inner region of the disk.
Image credit: NAOJ

The Solar System was born about 4.6 billion years ago in the protosolar disk, a cloud with gas and dust surrounding the young Sun. Although we are beginning to understand the planet-forming processes, there are still many mysteries; where did the materials comprising the planets, asteroids, and comets of the Solar System form, and how were they transported?

The composition of isotopes (varieties of an element with different atomic weights) could serve as a fingerprint for understanding the formation of the Solar System. For example, it is known that deuterium (an isotope of hydrogen) in the Earth’s water is more abundant than the average value in the Universe. Moreover, ice in molecular clouds, where stars are born, also has a higher deuterium abundance. By matching these two fingerprints, we can infer that some of the water in Earth’s oceans came from ice created in the molecular cloud where the Sun was born.

They found that the carbon monoxide isotopologue ratio is four times higher in the inner region of the disk than in the outer region. Since the ratio of 13C to 12C (carbon isotope ratio) is almost uniform in many objects in the Solar System, the team had expected that the ratio of 13CO to 12CO in the protoplanetary disk would also be uniform. This unexpected result suggests that the carbon isotope ratio, like the deuterium ratio, can be a useful “fingerprint” for tracing the origins of materials. Indeed, materials with carbon isotope ratios that deviate from the cosmic average have been found in meteorites. Recent observations of exoplanetary atmospheres also suggest that some planets have high 13CO abundances and others have low abundances. Matching these “fingerprints” to locations in protoplanetary disks would provide a clue for understanding the origins of the materials in Solar System bodies and exoplanets.

“We are going to investigate what factors are responsible for these isotopic ratio variations in protoplanetary disks, including the TW Hydrae disk. We aim to explore the material origins of the Solar System and exoplanetary systems by comparing results from many protoplanetary disks, exoplanets, and meteorites,” says Tomohiro Yoshida, the lead author of this study.

These research results will be published as T. Yoshida et al. “A New Method for Direct Measurement of Isotopologue Ratios in Protoplanetary Disks: A Case Study of the 12CO/13CO Ratio in the TW Hya Disk,” in the Astrophysical Journal Letters (DOI: 10.3847/1538-4357/ac6efb).