Unlike our Sun, most stars live with a companion. Sometimes, two come so close that one engulfs the other - with far-reaching consequences. When a team of astronomers used the telescope ALMA to study 15 unusual stars, they were surprised to find that they all recently underwent this phase. The discovery promises new insight on the sky's most dramatic phenomena – and on life, death and rebirth among the stars.
share
tweet 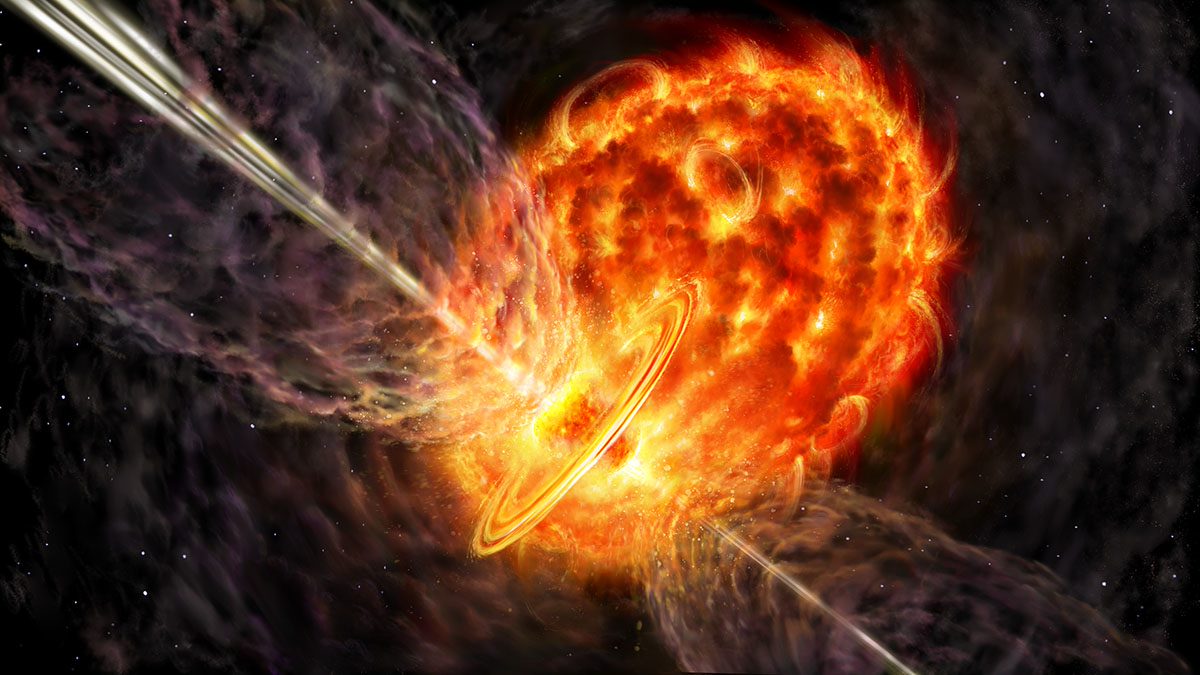 A pair of stars at the start of a common envelope phase. In this artist’s impression, we get a view from very close to a binary system in which two stars have just started to share the same atmosphere. The bigger star, a red giant star, has provided a huge, cool, atmosphere which only just holds together. The smaller star orbits ever faster round the stars’ centre of mass, spinning on its own axis and interacting in dramatic fashion with its new surroundings. the interaction creates powerful jets that throw out gas from its poles, and a slower-moving ring of material at its equator.
Credit: Danielle Futselaar, artsource.nl

Using the gigantic telescope ALMA in Chile, a team of scientists studied 15 unusual stars in our galaxy, the Milky Way, the closest 5000 light years from Earth. Their measurements show that all the stars are double, and all have recently experienced a rare phase that is poorly understood, but is believed to lead to many other astronomical phenomena. Their results were published in the scientific journal Nature Astronomy.

By directing the antennas of ALMA towards each star and measuring light from different molecules in close to each star, the researchers hoped to find clues to their backstories. Nicknamed “water fountains”, these stars were known to astronomers because of intense light from water molecules –produced by unusually dense and fast-moving gas.

Located 5000 m above sea level in Chile, ALMA is sensitive to light with wavelengths around one millimeter, invisible to human eyes, but ideal for looking through the Milky Way’s layers of dusty interstellar clouds towards dust-enshrouded stars.

“We were extra curious about these stars because they seem to be blowing out quantities of dust and gas into space, some in the form of jets with speeds up to 1.8 million kilometers per hour. We thought we might find out clues to how the jets were being created, but instead we found much more than that”, says Theo Khouri at Chalmers University of Technology, first author of the new study.

The scientists used the telescope to measure signatures of carbon monoxide molecules, CO, in the light from the stars, and compared signals from different atoms (isotopes) of carbon and oxygen. Unlike its sister molecule carbon dioxide, CO2, carbon monoxide is relatively easy to discover in space, and is a favourite tool for astronomers.

“Thanks to ALMA’s exquisite sensitivity, we were able to detect the very faint signals from several different molecules in the gas ejected by these stars. When we looked closely at the data, we saw details that we really weren’t expecting to see”, says Theo Khouri. 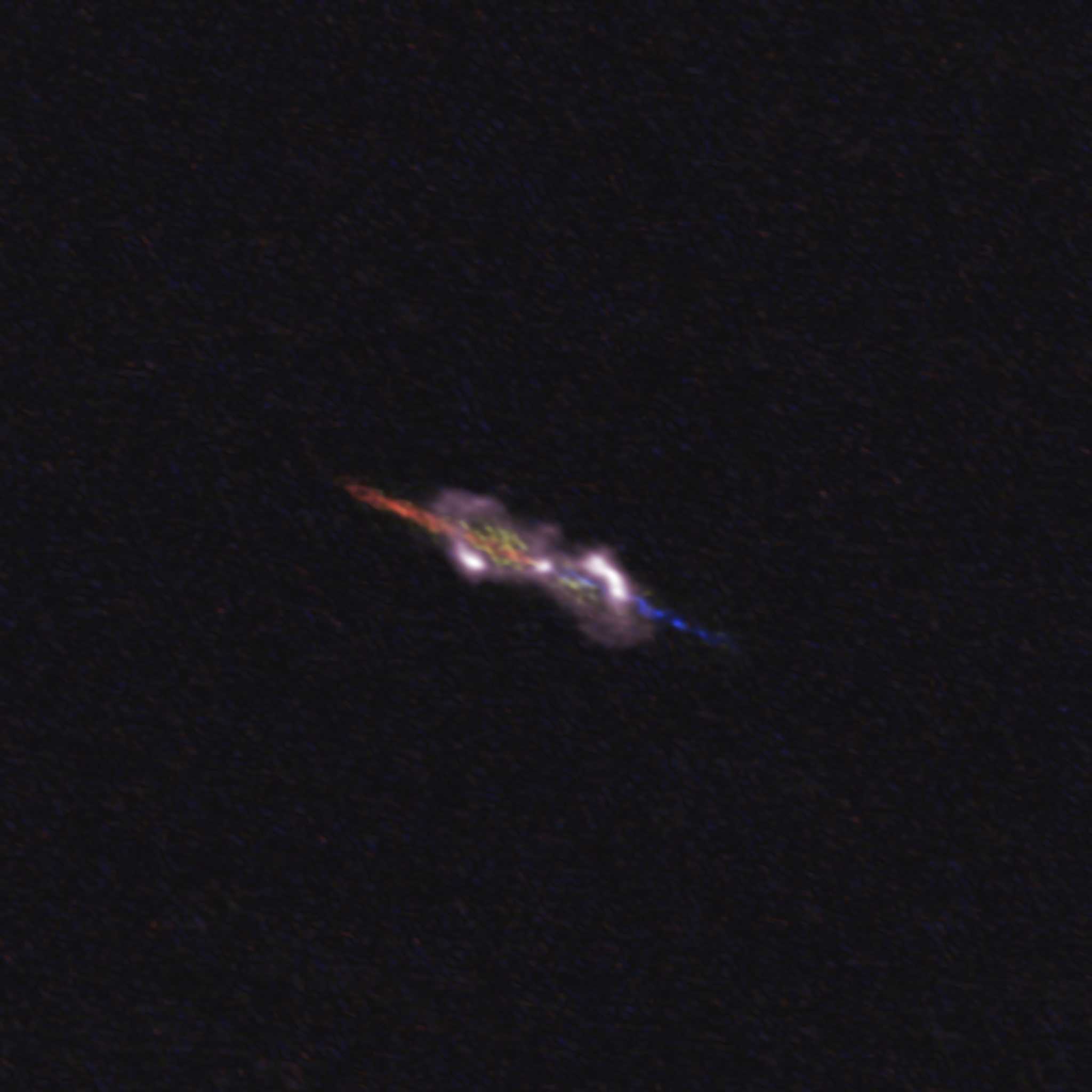 ALMA’s image of water-fountain star system W43A, which lies about 7000 light years from Earth in the constellation Aquila, the Eagle. The double star at its centre is much too small to be resolved in this image. However, ALMA’s measurements show the stars’ interaction has changed its immediate environment. The two jets ejected from the central stars are seen in blue (approaching us) and red (receding). Dusty clouds entrained by the jets are shown in pink.
Credit: ALMA (ESO/NAOJ/NRAO), D. Tafoya et al.

The observations confirmed that the stars were all blowing off their outer layers. But the proportions of the different oxygen atoms in the molecules indicated that the stars were in another respect not as extreme as they had seemed, explains team member Wouter Vlemmings, astronomer at Chalmers.

“We realised that these stars started their lives with the same mass as the Sun, or only a few times more. Now our measurements showed that they have ejected up to 50% of their total mass, just in the last few hundred years. Something really dramatic must have happened to them”, he says.

Why were such small stars come losing so much mass so quickly? The evidence all pointed to one explanation, the scientists concluded. These were all double stars, and they had all just been through a phase in which the two stars shared the same atmosphere – one star entirely embraced by the other.

“In this phase, the two stars orbit together in a sort of cocoon. This phase, we call it a “common envelope” phase, is really brief, and only lasts a few hundred years. In astronomical terms, it’s over in the blink of an eye”, says team member Daniel Tafoya.

Most stars in binary systems simply orbit around a common centre of mass. These stars, however, share the same atmosphere. It can be a life-changing experience for a star, and may even lead to the stars merging completely.

Scientists believe that this sort of intimate episode can lead to some of the sky’s most spectacular phenomena. Understanding how it happens could help answer some of astronomers’ biggest questions about how stars live and die, Theo Khouri explains.

“What happens to cause a supernova explosion? How do black holes get close enough to collide? What’s makes the beautiful and symmetric objects we call planetary nebulae? Astronomers have suspected for many years that common envelopes are part of the answers to questions like these. Now we have a new way of studying this momentous but mysterious phase”, he says.

Understanding the common envelope phase will also help scientists study what will happen in the very distant future, when the Sun too will become a bigger, cooler star – a red giant – and engulf the innermost planets.

“Our research will help us understand how that might happen, but it gives me another, more hopeful perspective. When these stars embrace, they send dust and gas out into space that can become the ingredients for coming generations of stars and planets, and with them the potential for new life”, says Daniel Tafoya.

Since the 15 stars seem to be evolving on a human timescale, the team plan to keep monitoring them with ALMA and with other radio telescopes.

“Actually, we think the known “water fountains” could be almost all the systems of their kind in the whole of our galaxy. If that’s true, then these stars really are the key to understanding the strangest, most wonderful and most important process that two stars can experience in their lives together”, concludes Theo Khouri.

This article is based on the press release issued by the Chalmers University of Technology on December 16, 2021.