TOP
Column
Taking the First Picture of a Black Hole [8] Challenges in obtain ... 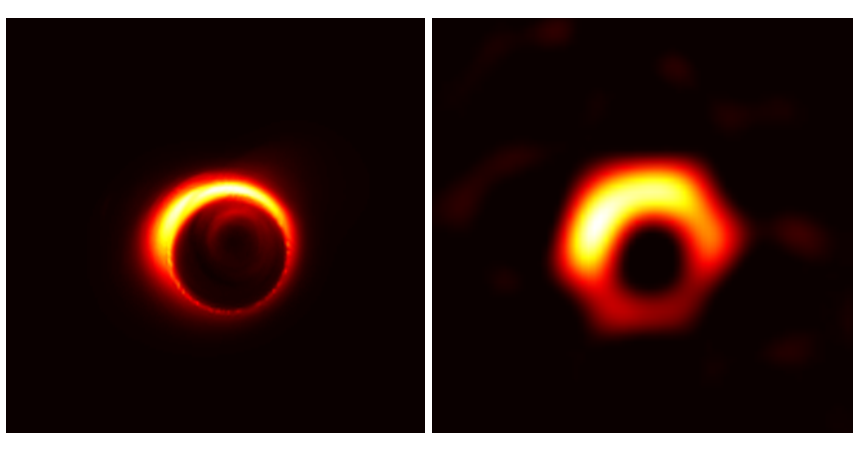 “Seeing a black hole” has been a long-cherished desire for many astronomers, but now, thanks to the Event Horizon Telescope (EHT) and the Global mm-VLBI Array (GMVA) projects, it may no longer be just a dream. To make it possible to image the shadow of the event horizon of Sagittarius A*, many researchers and leading-edge technologies have been mobilized — because obtaining an image of a black hole is not as easy as snapping a photo with an ordinary camera.

Sagittarius A* has a mass of approximately four million times that of the Sun, but it only looks like a tiny dot from Earth, 26 000 light-years away. To capture its image, incredibly high resolution is needed. As explained in the sixth post of this blog series, the key is to use Very-Long-Baseline Interferometry (VLBI), a technique that combines the observing power of and the data from telescopes around the world to create a virtual giant radio telescope.

In VLBI, each antenna is equipped with an extremely precise atomic clock to record the time at which radio signals from the target object were received. The gathered data are synthesized using the times as a reference, so that the arrival time of the radio waves to each antenna can be accurately adjusted.

But this process isn’t always straightforward because the Earth’s atmosphere blocks a certain range of wavelengths. Several kinds of molecules such as water vapor absorb a fraction of radio waves passing through the atmosphere, with shorter wavelengths more susceptible to absorption. To minimize the effect of atmospheric absorption, radio telescopes are built at high and dry sites, but even then they are still not completely immune from the effect. 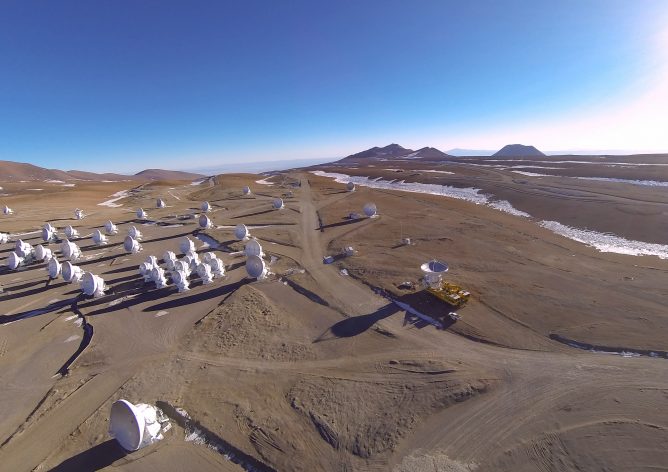 ALMA is located at 5000 meters above sea level, on the Chajnantor Plateau in the Atacama desert of northern Chile.
Credit: A. Marinkovic/X-Cam/ALMA (ESO/NAOJ/NRAO)

The tricky part of this effect is that the direction of a radio wave is slightly changed when it passes through the atmosphere containing water vapor. This means that the radio waves arrive at different times at each antenna, making it difficult to synthesize the data later using the time signal as a reference. And even worse: since VLBI utilizes antennas located thousands of kilometers apart, it has to take into account the differences in the amount of water vapor in the sky above each site, as well as the large fluctuations of water vapor content during the observation period. In optical observations, these fluctuations make the light of a star flicker and lower the resolution. Radio observations have similar problems.

“We have only a few ways to reduce this effect in VLBI observations,” explains Satoki Matsushita at the Academia Sinica Institute of Astronomy and Astrophysics (ASIAA) of Taiwan. “If there is a compact object emitting intense radiation near the target object, we can remove most of the effect of refraction of radio waves by water vapor by using such an intense radiation source as a reference. However, no such intense reference source has been found near Sagittarius A* so far. And even if there is a reference source, there are still necessary conditions that must be satisfied: the telescopes need to have the ability to observe the target object and reference object at the same time; or the telescopes need to have the high-speed drive mechanism to quickly switch the observation between the target object and the reference object. Unfortunately, not all telescopes participating in the EHT/GMVA observations have this capability. One of the methods to remove the effect by water vapor is to equip each antenna with an instrument to measure the amount of water vapor, but ALMA is the only telescope that has adopted this method at this point.”

Another major challenge in imaging a black hole is obtaining a high-quality image. By combining the data collected by antennas thousands of kilometers apart, VLBI achieves a resolution equivalent to a radio telescope several thousands of kilometers in diameter. However, VLBI also has a lot of large blank areas that are not covered by any of the antennas. These missing parts make it difficult for VLBI to reproduce a high-fidelity image of a target object from the synthesized data. This is a common problem for all radio interferometers, including ALMA, but it can be more serious in VLBI where the antennas are located very far apart.

It might be natural to think that a higher resolution means a higher image quality, as is the case with an ordinary digital camera, but in radio observations the resolution and image quality are quite different things. The resolution of a telescope determines how close two objects can be to each other and yet still be resolved as separate objects, while the image quality defines the fidelity in reproducing the image of the structure of the observed object. For example, imagine a leaf, which has a variety of veins. The resolution is the ability to see thinner vein patterns, while the image quality is the ability to capture the overall spread of the leaf. In normal human experience, it would seem bizarre if you could see the very thin veins of a leaf but couldn’t grasp a complete view of the leaf — but such things happen in VLBI, since some portions of data are inevitably missing. 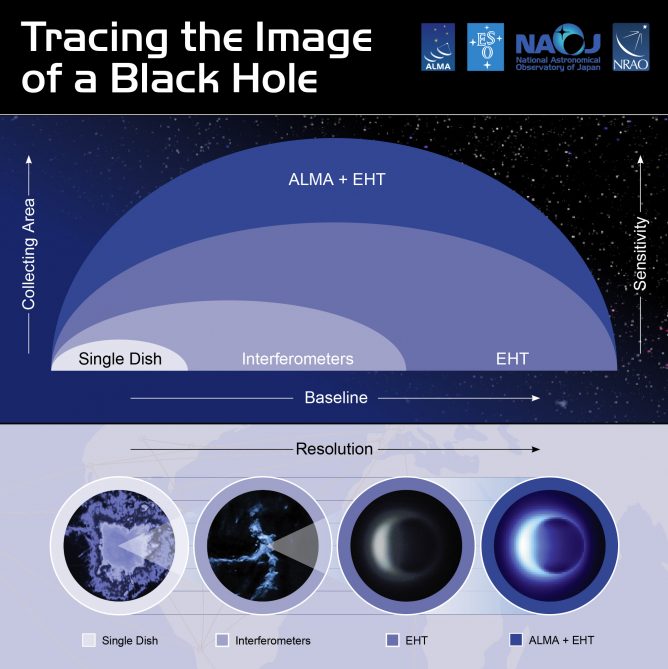 Researchers have been studying data processing methods to improve image quality for almost as long as the history of the radio interferometer itself, so there are some established methods that are already widely used, while others are still in an experimental phase. In the Event Horizon Telescope (EHT) and the Global mm-VLBI Array (GMVA), which are both aiming to capture the shadow of a black hole’s event horizon for the first time, researchers began to develop effective image analysis methods using simulation data well before the start of the observations. 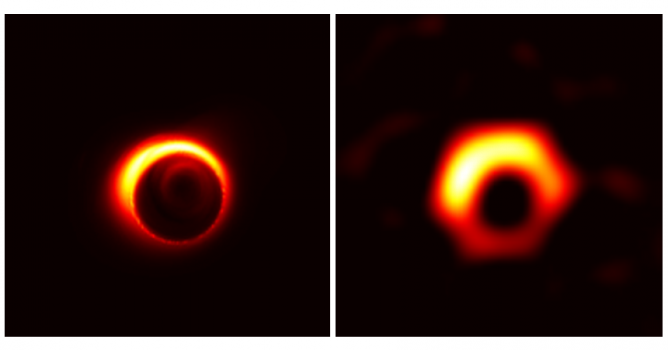 A simulated image of the supermassive black hole Sagittarius A*, which is likely to be obtained in the most recent EHT observations. The dark gap at the center is the shadow of the black hole.
Credit: Kazunori Akiyama (MIT Haystack Observatory)

The observations with the EHT and the GMVA were completed in April 2017. The data collected by the antennas around the world has been sent to the US and Germany, where data processing will be conducted with dedicated data-processing computers called correlators. The data from the South Pole Telescope, one of the participating telescopes in the EHT, will arrive at the end of 2017, and then data calibration and data synthesis will begin in order to produce an image if possible. This process might take several months to achieve the goal of obtaining the first image of a black hole, which is eagerly awaited by black hole researchers and the general astronomical community worldwide.

This lengthy time span between observations and results is normal in astronomy, as the reduction and analysis of the data is a careful, time-consuming process. Right now, all we can do is wait patiently for success to come — for a long-held dream of astronomers to be transformed into reality.

Until then, this is the last post in our blog series about the EHT and GMVA projects. When the results become available in early 2018, we’ll be back with what will hopefully be exciting new information about our turbulent and fascinating galactic center. 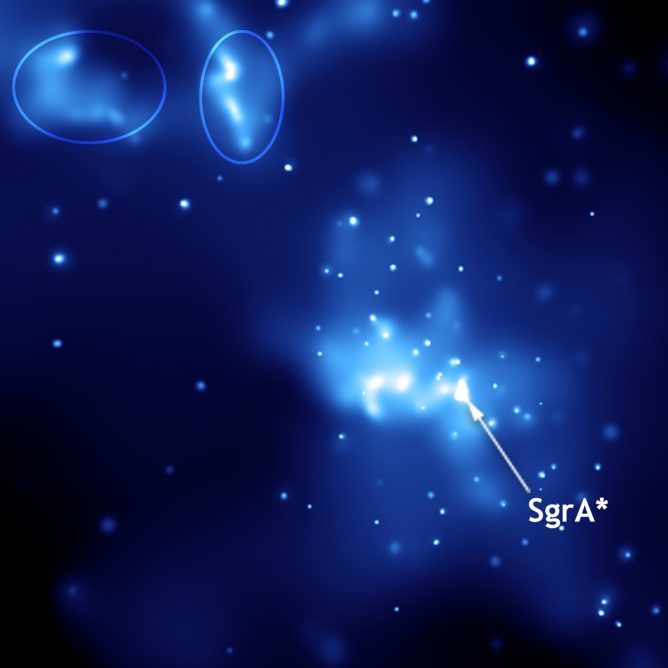 Taking the First Picture of a Black Hole [7] What is Sagittarius A*? 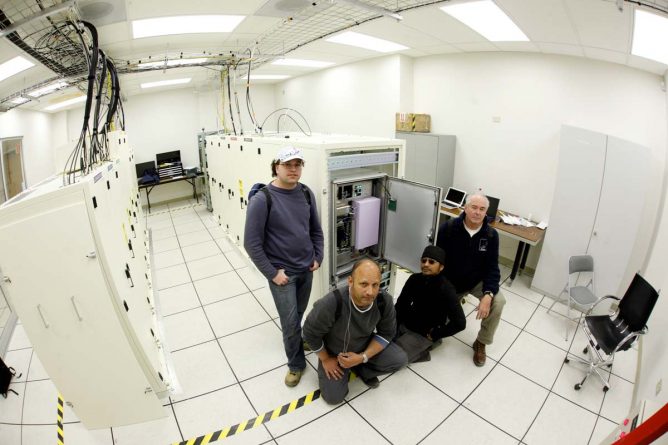