On February 22, 2022, the newly developed spectrometer for the Total Power Array of the Atacama Compact Array (ACA), also known as Morita Array, has successfully acquired its first radio spectra towards Orion KL. This is an important milestone for the East Asian ALMA Development Program, materialized through a strong collaboration between the Korea Astronomy and Space Science Institute (KASI) and the National Astronomical Observatory of Japan (NAOJ) within the East Asian ALMA partnership.
share
tweet

KASI in collaboration with NAOJ has developed a new spectrometer for the Total Power array of the Morita Array based on Graphics Processing Unit (GPU) technology that is used widely in graphics processing and video games. The collaboration started more than five years ago. It reached an important milestone on February 22, 2022, when the development team successfully installed the spectrometer onsite and acquired its first radio spectra towards Orion KL, despite the challenges posed by the COVID-19 pandemic. 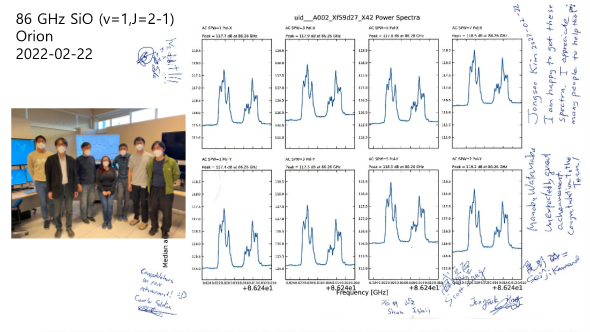 The four 12-meter diameter antennas (Total Power array) of the ACA play a critical role in constructing high-fidelity images of relatively large astronomical objects. The Total Power array captures the absolute brightness of the targets, whose digitized data will then be processed at the spectrometer. The resulting data will be later combined with the data from the ACA 7-m array and the ALMA 12-m array. The Total Power Array data are currently handled by the ACA correlator, the same instrument which processes the ACA 7-m array data.

The project’s principal investigator, Jongsoo Kim (KASI), said: “I am happy to see the first spectral line from the GPU spectrometer. The spectrometer is the first instrument contribution from the KASI to the ALMA community through the KASI and NAOJ collaboration. I appreciate the development team’s dedicated effort, which started more than five years ago. I also thank many JAO and NAOJ colleagues who helped us install the spectrometer and get the first light.”
Manabu Watanabe of NAOJ adds, “I’m so excited to see the beautiful spectra gotten with the new Spectrometer. Thanks to the excellent collaboration with various groups and individuals across ALMA, and needless to say, the dedicated efforts of the project team. I can’t wait for hearing the result of the science commissioning in April and May, which will demonstrate the full capabilities of the spectrometer”.

The GPU spectrometer project started just after KASI joined the East Asian ALMA partnership. The project’s first milestone was the concept design review held on September 24, 2016. Since then, the project team has successfully finished a series of reviews, such as the Preliminary Design (February 20~21, 2017) , Critical Design and Manufacturing (December 4~5, 2019), and Preliminary Acceptance In-house (November 29~30, 2021). The team plans to conduct commission and science verification observations in April and May 2022. The GPU spectrometer is expected to be used for scientific observations from October 2023, when Cycle 10 observations begin.

“The ACA spectrometer first light is a very important milestone in the collaboration between KASI and NAOJ for ALMA and has been possible thanks to the hard work of many people in both institutes and with the invaluable support in Chile from the Joint ALMA Observatory. The installation on site has been challenging due to the global pandemic, and thus we are delighted to see the first-light spectra. More commissioning work is necessary, but we are on track to offer the capabilities offered by this new instrument to the Community for Open Use from Cycle 10.” says Alvaro Gonzalez (NAOJ), the East Asian ALMA Program Manager. 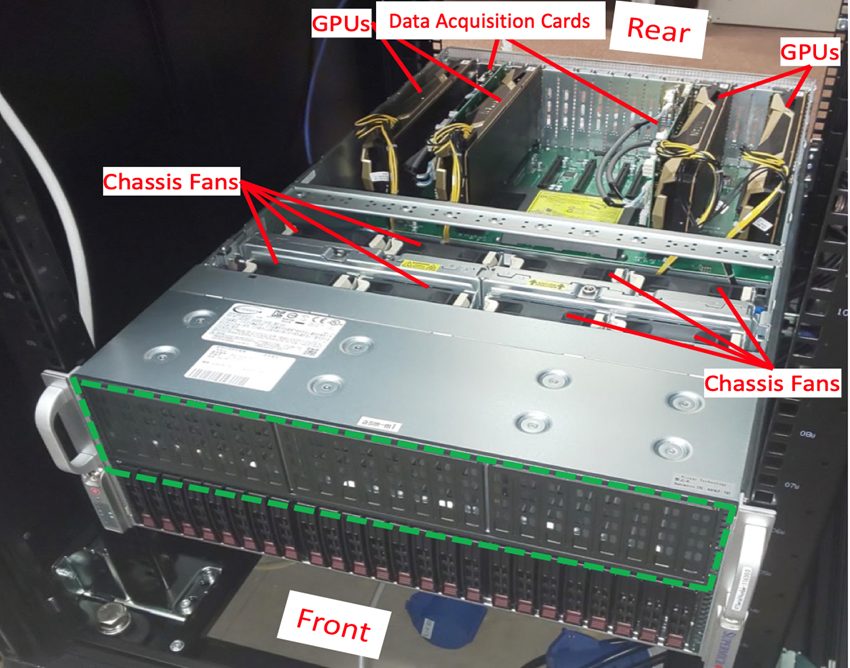 The GPU spectrometer is designed to calculate full-polarization products of the science target and cross-antenna correlation of the calibration target. It is composed of 4+1 (spare) GPU servers and 1+1 (spare) computer server(s) for monitoring and control (M&C) purposes, two-way optical splitters, and optical signal amplifiers. Each server has four GPU cards and two data acquisition cards. Each optical splitter bifurcates an optical signal path into two; one for the ACA Correlator and the other for the GPU spectrometer. Amplifiers are added to compensate for the reduced signal levels due to the splitters. The M&C server controls the GPU servers, collects and archives monitoring information of the spectrometer, and sends final products from the GPU servers to the ALMA Archive.