Astronomers using the Atacama Large Millimeter/submillimeter Array (ALMA) have spotted a peculiar gas cloud that resulted from a confrontation between two stars. One star grew so large it engulfed the other which, in turn, spiralled towards its partner provoking it into shedding its outer layers.

Like humans, stars change with age and ultimately die. For the Sun and stars like it, this change will take it through a phase where, having burned all the hydrogen in its core, it swells up into a large and bright red-giant star. Eventually, the dying Sun will lose its outer layers, leaving behind its core: a hot and dense star called a white dwarf.

“The star system HD101584 is special in the sense that this ‘death process’ was terminated prematurely and dramatically as a nearby low-mass companion star was engulfed by the giant,” said Hans Olofsson of the Chalmers University of Technology, Sweden, who led a recent study, published in Astronomy & Astrophysics, of this intriguing object.

Thanks to new observations with ALMA, complemented by data from the Atacama Pathfinder EXperiment (APEX), Olofsson and his team now know that what happened in the double-star system HD101584 was akin to a stellar fight. As the main star puffed up into a red giant, it grew large enough to swallow its lower-mass partner. In response, the smaller star spiralled in towards the giant’s core but didn’t collide with it. Rather, this manoeuver triggered the larger star into an outburst, leaving its gas layers dramatically scattered and its core exposed.

The team says the complex structure of the gas in the HD101584 nebula is due to the smaller star’s spiralling towards the red giant, as well as to the jets of gas that formed in this process. As a deadly blow to the already defeated gas layers, these jets blasted through the previously ejected material, forming the rings of gas and the bright bluish and reddish blobs seen in the nebula.

A silver lining of a stellar fight is that it helps astronomers to better understand the final evolution of stars like the Sun. “Currently, we can describe the death processes common to many Sun-like stars, but we cannot explain why or exactly how they happen. HD101584 gives us important clues to solve this puzzle since it is currently in a short transitional phase between better studied evolutionary stages. With detailed images of the environment of HD101584 we can make the connection between the giant star it was before, and the stellar remnant it will soon become,” says co-author Sofia Ramstedt from Uppsala University, Sweden.

Co-author Elizabeth Humphreys from the European Southern Observatory in Chile highlighted that ALMA and APEX, located in the country’s Atacama region, were crucial to enabling the team to probe “both the physics and chemistry in action” in the gas cloud. She added: “This stunning image of the circumstellar environment of HD101584 would not have been possible without the exquisite sensitivity and angular resolution provided by ALMA.”

Paper and the research team
These observation results were published as H. Olofsson et al. “HD 101584: circumstellar characteristics and evolutionary status” in the Astronomy and Astrophysics.

This article is based on the ESO press release issued on February 5, 2020. 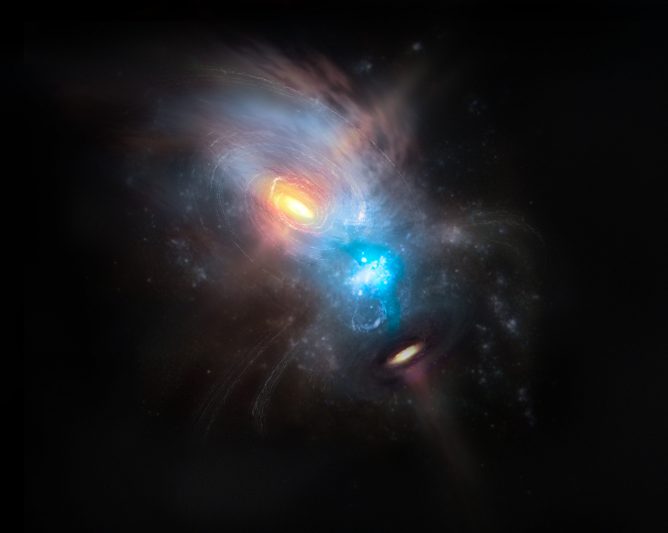