TOP
News
Astronomers make most distant detection yet of fluorine in star-for ...

A new discovery is shedding light on how fluorine — an element found in our bones and teeth as fluoride — is forged in the Universe. Using the Atacama Large Millimeter/submillimeter Array (ALMA), a team of astronomers have detected this element in a galaxy that is so far away its light has taken over 12 billion years to reach us. This is the first time fluorine has been spotted in such a distant star-forming galaxy.
share
tweet 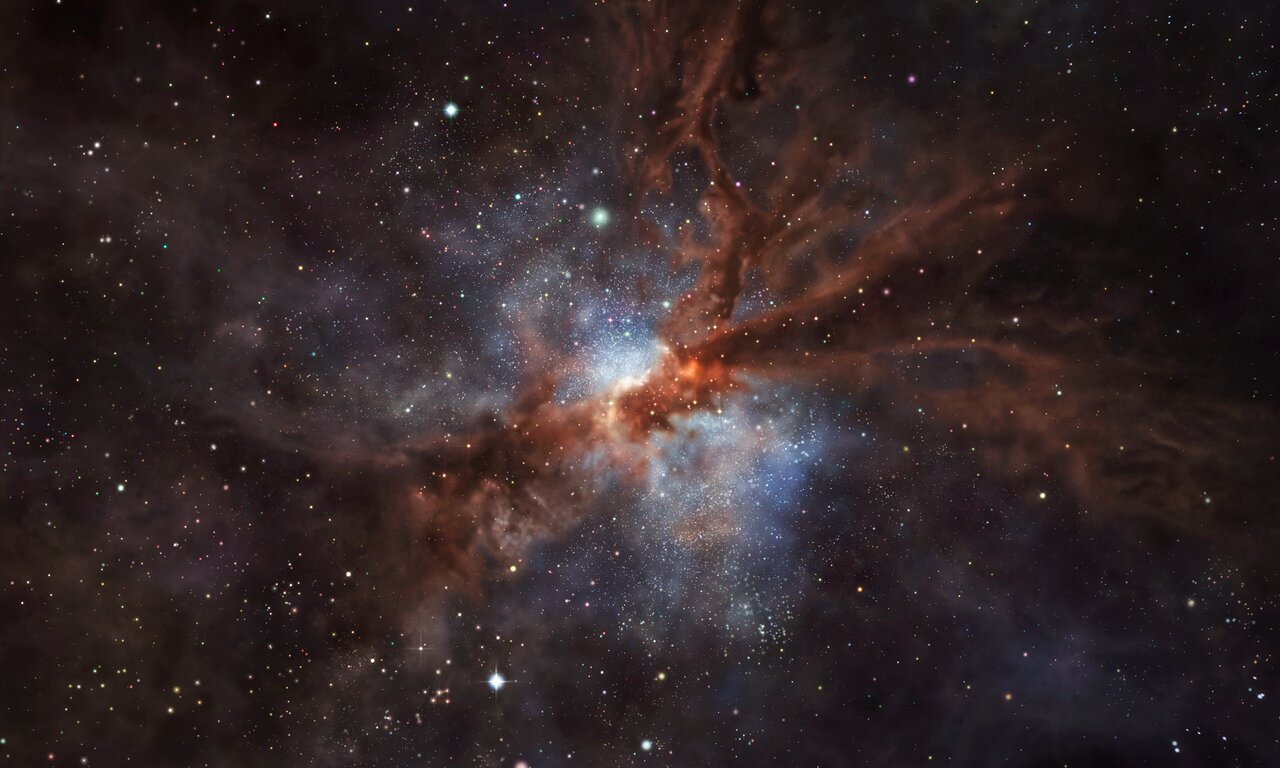 This artist’s impression shows NGP–190387, a star-forming, dusty galaxy that is so far away its light has taken over 12 billion years to reach us.
Credit: ESO/M. Kornmesser

“We all know about fluorine because the toothpaste we use every day contains it in the form of fluoride,” says Maximilien Franco from the University of Hertfordshire in the UK, who led the new study, published today in Nature Astronomy. Like most elements around us, fluorine is created inside stars but, until now, we did not know exactly how this element was produced. “We did not even know which type of stars produced the majority of fluorine in the Universe!”

Franco and his collaborators spotted fluorine (in the form of hydrogen fluoride) in the large clouds of gas of the distant galaxy NGP–190387, which we see as it was when the Universe was only 1.4 billion years old, about 10% of its current age. Since stars expel the elements they form in their cores as they reach the end of their lives, this detection implies that the stars that created fluorine must have lived and died quickly.

The team believes that Wolf–Rayet stars, very massive stars that live only a few million years, a blink of the eye in the Universe’s history, are the most likely production sites of fluorine. They are needed to explain the amounts of hydrogen fluoride the team spotted, they say. Wolf–Rayet stars had been suggested as possible sources of cosmic fluorine before, but astronomers did not know until now how important they were in producing this element in the early Universe.

“We have shown that Wolf–Rayet stars, which are among the most massive stars known and can explode violently as they reach the end of their lives, help us, in a way, to maintain good dental health!” jokes Franco. 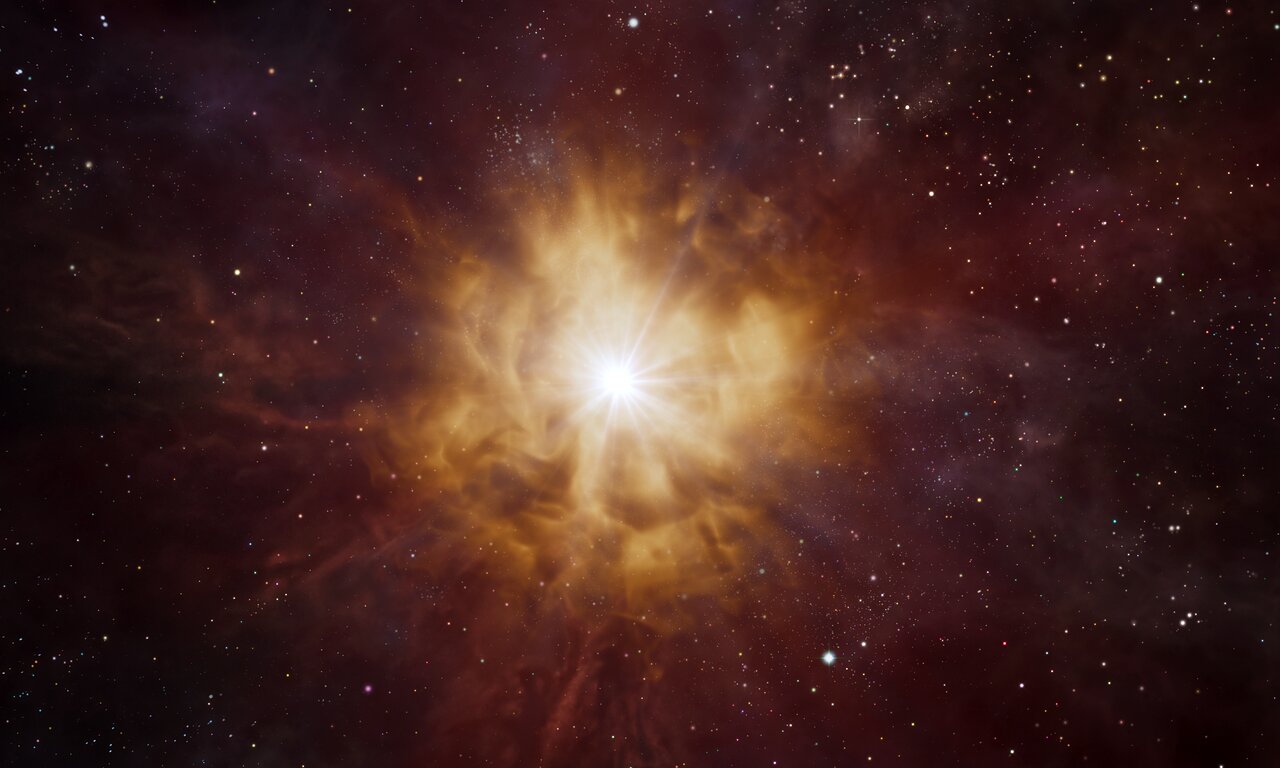 Artist’s impression of the bright core of a Wolf–Rayet star surrounded by a nebula of material which has been expelled by the star itself.
Credit: ESO/L. Calçada

Besides these stars, other scenarios for how fluorine is produced and expelled have been put forward in the past. An example includes pulsations of giant, evolved stars with masses up to few times that of our Sun, called asymptotic giant branch stars. But the team believes these scenarios, some of which take billions of years to occur, might not fully explain the amount of fluorine in NGP–190387.

“For this galaxy, it took just tens or hundreds of millions of years to have fluorine levels comparable to those found in stars in the Milky Way, which is 13.5 billion years old. This was a totally unexpected result,” says Chiaki Kobayashi, a professor at the University of Hertfordshire. “Our measurement adds a completely new constraint on the origin of fluorine, which has been studied for two decades.”

The discovery in NGP–190387 marks one of the first detections of fluorine beyond the Milky Way and its neighboring galaxies. Astronomers have previously spotted this element in distant quasars, bright objects powered by supermassive black holes at the center of some galaxies. But never before had this element been observed in a star-forming galaxy so early in the history of the Universe.

The team’s detection of fluorine was a chance discovery made possible thanks to the use of space and ground-based observatories. NGP–190387, originally discovered with the European Space Agency’s Herschel Space Observatory and later observed with the Chile-based ALMA, is extraordinarily bright for its distance. The ALMA data confirmed that the exceptional luminosity of NGP–190387 was partly caused by another known massive galaxy, located between NGP–190387 and the Earth, very close to the line of sight. This massive galaxy amplified the light observed by Franco and his collaborators, enabling them to spot the faint radiation emitted billions of years ago by the fluorine in NGP–190387.

Future studies of NGP–190387 could reveal further secrets about this galaxy. “ALMA is sensitive to radiation emitted by cold interstellar gas and dust,” says Chentao Yang, an ESO Fellow in Chile. “With the Extremely Large Telescope, we will be able to observe NGP–190387 through the direct light of stars, gaining crucial information on the stellar content of this galaxy.”

This article is based on the press release issued by the European Southern Observatory on November 4, 2021.

These observation results were published in M. Franco et al. “The ramp-up of interstellar medium enrichment at z > 4” in the Nature Astronomy on November 4, 2021.