ALMA traverses Chile with its science

“It’s really fantastic, because there are no specialized teachers here who can teach you about the Universe like astronomers,” celebrates Arlette Olguín, student in Porvenir. ALMA gave talks as far south as Tierra del Fuego, with another 12 in the Metropolitan Region, while ExpoALMA was well received in Osorno, and the inhabitants of San Pedro de Atacama hung their wishes on trees, as part of the Japanese tradition of Tanabata, celebrated by ALMA and its Asian partner.

These have been intense months of outreach on ALMA. The observatory participated in Conicyt’s 1000 Scientists, 1000 Classrooms program, giving 12 talks in schools in the Metropolitan Region in the second semester of 2017. ALMA staff has been present in classrooms in the districts of La Pintana and Maipú and will soon appear in Padre Hurtado, Puente Alto, San Miguel, Quilicura, Downtown Santiago, El Bosque and Pedro Aguirre Cerda. 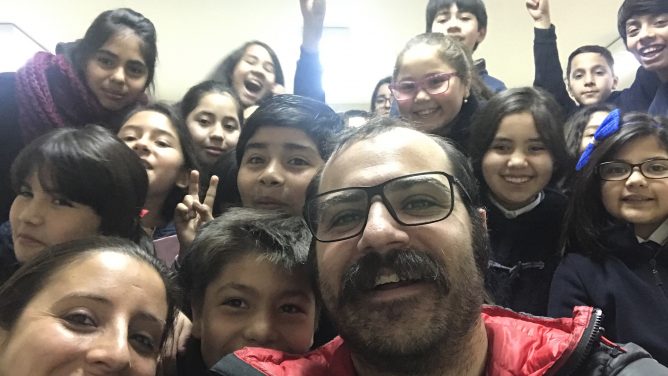 “I think it is great that they are doing outreach on this branch of science, which isn’t very well known among young people. We don’t know what is going on above us, if there is a full or crescent Moon and how that affects us, we just worry about ourselves and we don’t care about the world around us,” says Valentina Vio, 11th grade student at Hernando de Magallanes high school. Astronomer Paulo Cortés traveled to Porvenir and Punta Arenas to explain why there are so many observatories in Chile, what ALMA contributes and what it has discovered to date. “The talk was fantastic, it is really new and different, I have always liked this subject but now it feels like something within reach,” says Iván González Harper, 9th grade student at Punta Arenas school. 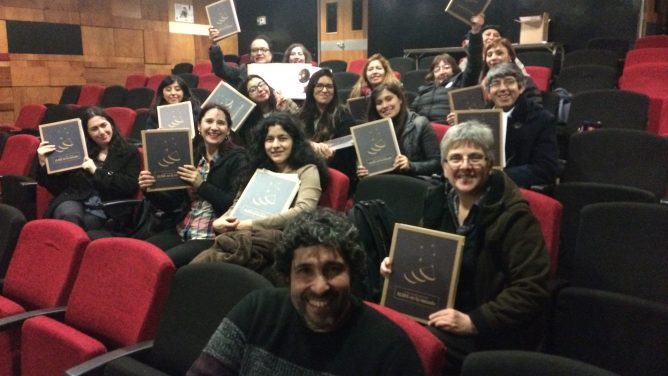 Astronomer Paulo Cortés with teachers from all over Tierra del Fuego after a Radio Astronomy Workshop. Credit: ALMA (ESO/NAOJ/NRAO) 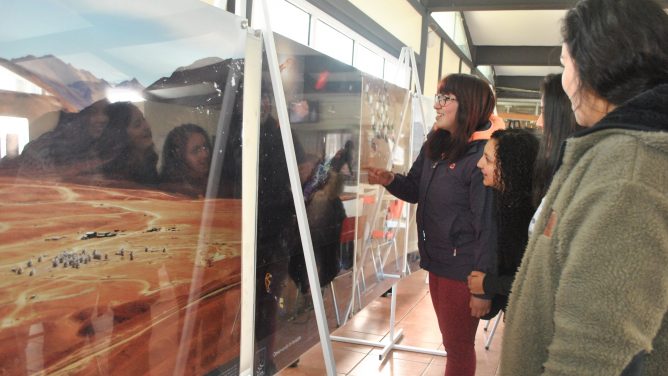 Part of the ExpoALMA traveling exhibition reached the far south of Chile, and in Osorno, another pieces of this exhibition was inaugurated as part of the 6th Science and Technology Fair. Organized by Universidad Santo Tomás and the Municipality of Osorno, the show will be open with free admission for a month in the main hall of the university and in the Cultural Center Gallery. 16 photos show the construction of the observatory, ten larger images show important astronomic discoveries that have been made possible with ALMA, and 17 graphic depictions for children explain different aspects of the observatory in age-appropriate language.

Radio astronomy workshops were held for elementary and high school teachers in Osorno, Punta Arenas and Porvenir, drawing in teachers from towns across both regions. Participants received ‘ALMA at school’ radio astronomy manuals and were instructed on their use for developing activities in the classroom.

Finally, as part of the celebrations of 120 years of friendship between Chile and Japan, ALMA joined its partner NAOJ and the Municipality of San Pedro de Atacama to bring the traditional Japanese celebration of Tanabata to this northern town. “It is very important for us to participate in these types of activities because they teach people, entertain them, and bring them together around a common purpose, which is to write their sincere wishes, in a district where astronomy is really important. Many people come here for its beautiful skies,” comments Mariana Jerez, Municipal Administrator of San Pedro de Atacama. 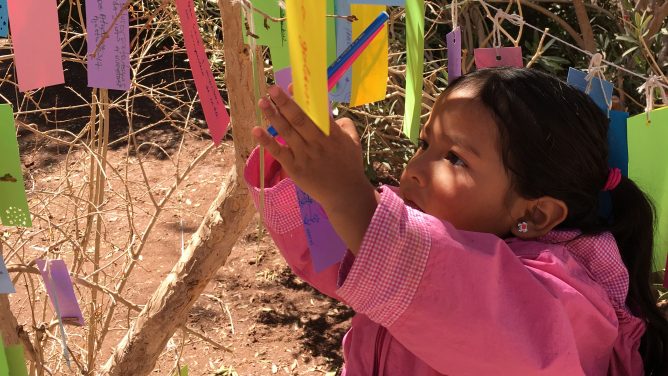 People from all ages wrote their wishes and hung them in trees as part of the Tanabata Japanese tradition celebrated in San Pedro de Atacama. Credit: ALMA (ESO/NAOJ/NRAO)

Tanabata, or the star festival, celebrates the meeting of Orihime (Vega) and Hikoboshi (Altair), lovers separated by a river made of stars that cross the sky (the Milky Way), who are only allowed to see each other once a year, the seventh day of the seventh lunar month of the ancient lunisolar calendar. But when this occurs, it is said that their happiness is so great that they make everyone’s wishes come true.

“I am deeply impressed that so many children have come out to share their dreams and wishes on paper,” says Seiichi Sakamoto, representative in Chile of the National Astronomical Observatory of Japan (NAOJ), ALMA partner. “Major scientific projects like ALMA need the support of the local population and traditional events like this allow them to share ideas and work toward the future.”