On July 31(Chile Time), interference fringes were successfully detected in an interferometer test with Band 4 receivers at the Operations Support Facility (OSF) at 2900 m asl. In this test, one Japanese 7-m antenna and one 12-m European antenna were used to receive emissions from Mercury and the Orion Nebula.

The figure below shows the spectrum (left) and the phase (right) of the Orion Nebula. The two peaks in the middle of the spectrum graph indicate the emission from the target object.

Band 4 receiver is one of the three types of receivers (Bands 4, 8, and 10) developed and manufactured by the National Astronomical Observatory of Japan (NAOJ). The performance of the Band 8 receiver has already been verified in the previous successful interferometer test conducted this March (Mar 28, 2012 Successful Interferometer Test with Band 8 Receiver).

The two group photos show the members of the ALMA Department of Engineering (ADE) [top] and the System Integration Science Team (SIST) [bottom]. Shin’Ichiro Asayama (Assistant Professor at NAOJ/ Senior RF engineer at JAO) is second right in the top photo and rightmost in the bottom photo, and Hiroshi Yatagai (Software Engineer at NAOJ /Test Scientist at JAO) is second right in the bottom photo. As shown in these photos, many researchers and engineers are engaged in the construction and commissioning of ALMA.
For details of the development and test observation of the Band 4 receiver, see the column page “Bienvenido a ALMA ! 04. Bands 4 and 8 Received First Spectrum !”. 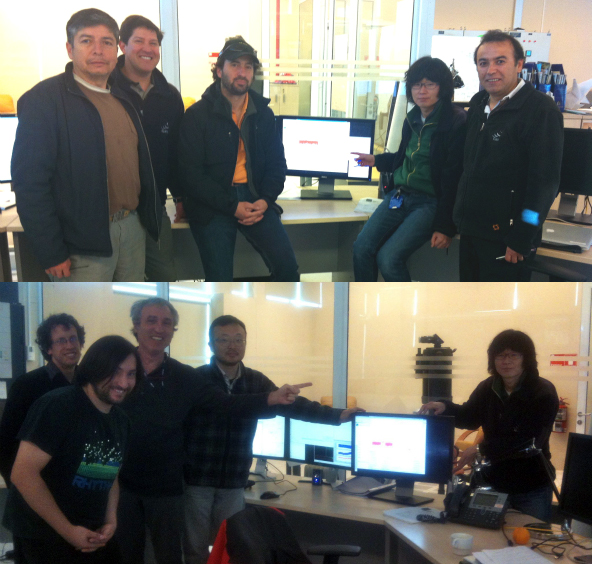