Astronomers using the Atacama Large Millimeter/submillimeter Array (ALMA) have discovered a tsunami of stars and gas that is crashing midway through the disk of a spiral galaxy known as IC 2163. This colossal wave of material – which was triggered when IC 2163 recently sideswiped another spiral galaxy dubbed NGC 2207 – produced dazzling arcs of intense star formation that resemble a pair of eyelids. 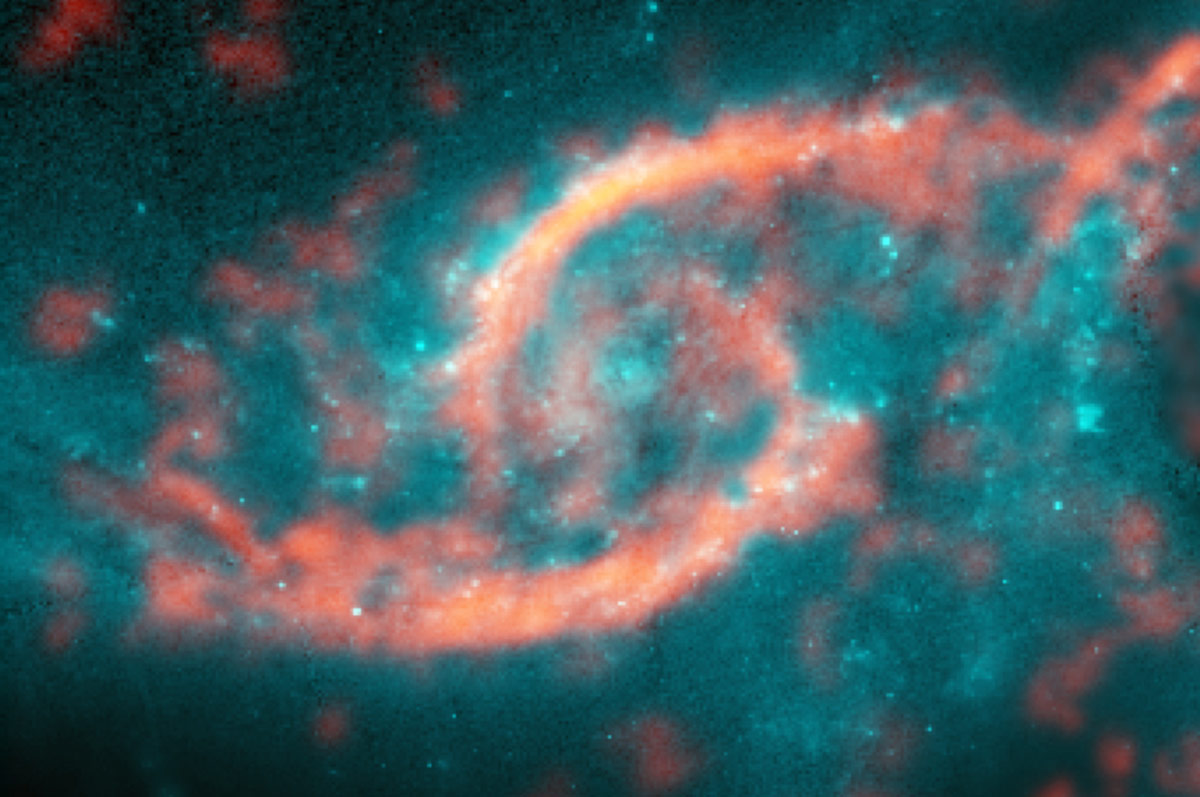 Image 1. Dazzling eyelid-like features bursting with stars in galaxy IC 2163 formed from a tsunami of stars and gas triggered by a glancing collision with galaxy NGC 2207 (a portion of its spiral arm is shown on right side of image). ALMA image of carbon monoxide (orange), which revealed motion of the gas in these features, is shown on top of Hubble image (blue) of the galaxy.
Credit: M. Kaufman; B. Saxton (NRAO/AUI/NSF); ALMA (ESO/NAOJ/NRAO); NASA/ESA Hubble Space Telescope

“Although galaxy collisions of this type are not uncommon, only a few galaxies with eye-like, or ocular, structures are known to exist,” said Michele Kaufman, an astronomer formerly with The Ohio State University in Columbus and lead author on a paper published in the Astrophysical Journal.

Kaufman and her colleagues note that the paucity of similar features in the observable universe is likely due to their ephemeral nature. “Galactic eyelids last only a few tens of millions of years, which is incredibly brief in the lifespan of a galaxy. Finding one in such a newly formed state gives us an exceptional opportunity to study what happens when one galaxy grazes another,” said Kaufman.

The interacting pair of galaxies resides approximately 114 million light-years from Earth in the direction of the constellation Canis Major. These galaxies brushed past each other – scraping the edges of their outer spiral arms – in what is likely the first encounter of an eventual merger.

Using ALMA’s remarkable sensitivity and resolution, the astronomers made the most detailed measurements ever of the motion of carbon monoxide gas in the galaxy’s narrow eyelid features. Carbon monoxide is a tracer of molecular gas, which is the fuel for star formation.

The data reveal that the gas in the outer portion of IC 2163’s eyelids is racing inward at speeds in excess of 100 kilometers a second. This gas, however, quickly decelerates and its motion becomes more chaotic, eventually changing trajectory and aligning itself with the rotation of the galaxy rather than continuing its pell-mell rush toward the center.

“What we observe in this galaxy is very much like a massive ocean wave barreling toward shore until it interacts with the shallows, causing it to lose momentum and dump all of its water and sand on the beach,” said Bruce Elmegreen, a scientist with IBM’s T.J. Watson Research Center in Yorktown Heights, New York, and co-author on the paper.

“Not only do we find a rapid deceleration of the gas as it moves from the outer to the inner edge of the eyelids, but we also measure that the more rapidly it decelerates, the denser the molecular gas becomes,” said Kaufman. “This direct measurement of compression shows how the encounter between the two galaxies drives gas to pile up, spawn new star clusters and form these dazzling eyelid features.”

Computer models predict that such eyelid-like features could evolve if galaxies interacted in a very specific manner. “This evidence for a strong shock in the eyelids is terrific. It’s all very well to have a theory and simulations suggesting it should be true, but real observational evidence is great,” said Curtis Struck, a professor of astrophysics at Iowa State University in Ames and co-author on the paper.

“ALMA showed us that the velocities of the molecular gas in the eyelids are on the right track with the predictions we get from computer models,” said Kaufman. “This critical test of encounter simulations was not possible before.”

Astronomers believe that such collisions between galaxies were common in the early universe when galaxies were closer together. At that time, however, galactic disks were generally clumpy and irregular, so other processes likely overwhelmed the formation of similar eyelid features.

The authors continue to study this galaxy pair and currently are comparing the properties (e.g., locations, ages, and masses) of the star clusters previously observed with NASA’s Hubble Space Telescope with the properties of the molecular clouds observed with ALMA. They hope to better understand the differences between molecular clouds and star clusters in the eyelids and those elsewhere in the galaxy pair.

This research is presented in a paper titled “Ocular Shock Front in the Colliding Galaxy IC 2163” by M. Kaufman et al., published in Astrophysical Journal.

Image 2. Galaxies IC 2163 (left) and NGC 2207 (right) recently grazed past each other, triggering a tsunami of stars and gas in IC 2163 and producing the dazzling eyelid-like features there. ALMA image of carbon monoxide (orange), which revealed motion of the gas in these features, is shown on top of Hubble image (blue) of the galaxy pair.
Credit: M. Kaufman; B. Saxton (NRAO/AUI/NSF); ALMA (ESO/NAOJ/NRAO); NASA/ESA Hubble Space Telescope 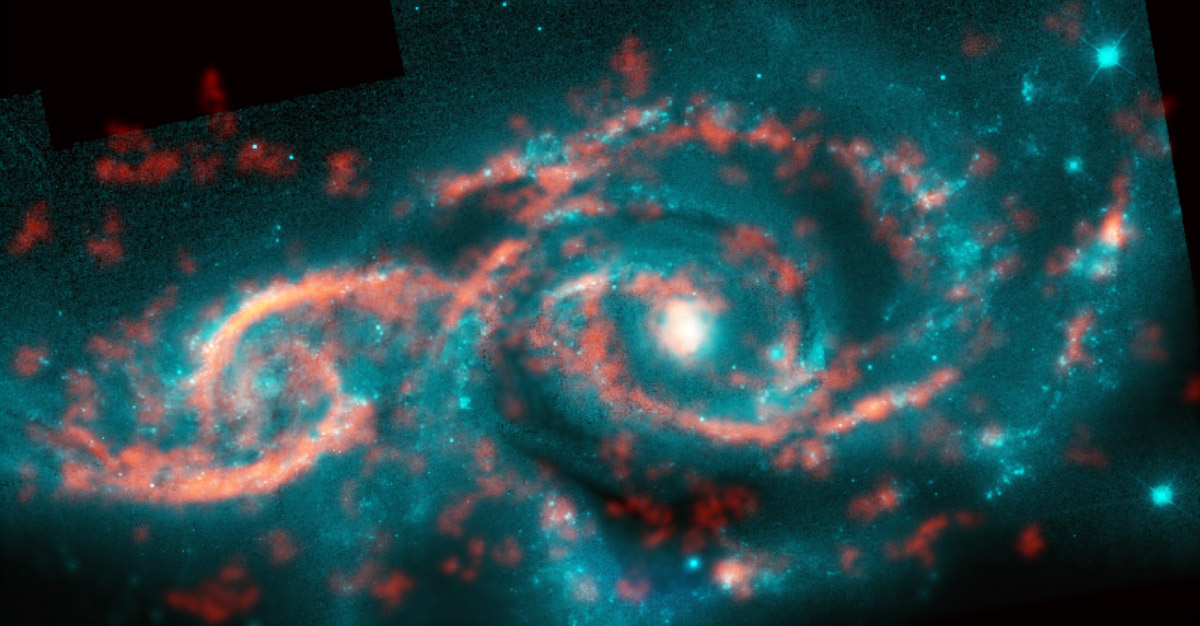