The 2017 PASJ Excellent Paper Award was given to Misato Fukagawa (Nagoya University) et al. for the excellence of their published research paper. The award is given to the author(s) of the most outstanding and inventive paper(s) which has been published to the Publications of the Astronomical Society of Japan (PASJ) during the past 5 years, commending the contributions to the advancement of astronomy. 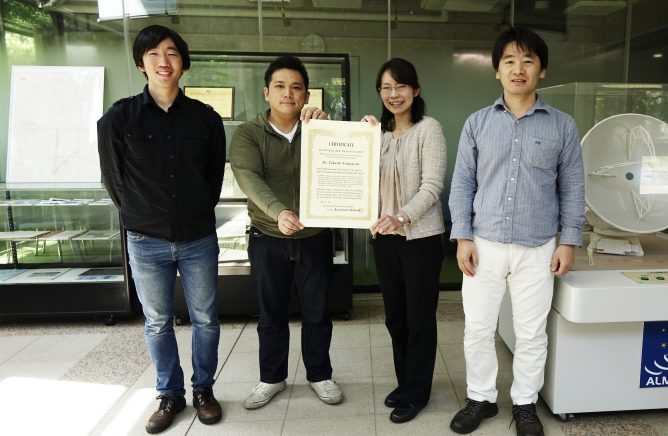 The awarded paper reports the observation results of a dust disk around the young star HD142527. Fukagawa et al. found that dust is not uniformly distributed in the disk and there are locally dense regions of dust that might possibly be planetary forming regions. These findings have significant impact on the establishment of the planet formation theory and the number of citations has already reached 85 as of December 2017. The paper was awarded for the achievements in leading the research of the formation and evolution of protoplanetary disks to new progress and for its ripple effect that can be expected for the future.

The lead author Fukagawa said, “The paper was completed through collaboration of all members of the research team. We are glad that our effort was rewarded with excellent results. However, this is just an initial outcome that we obtained with ALMA in its early phase of operations. Since then ALMA has dramatically improved the performance and it has become possible to observe an increasing number of protoplanetary disks using new methods and with higher resolution. We still have a lot to explore in unveiling the birth of planetary systems. To gain further understanding, we will continuously devote ourselves to our research.”