ALMA Discovers a Formation Site of a Giant Planetary System

A team of Japanese astronomers has obtained a firm evidence of formation of a giant planetary system around a young star by the observations with the Atacama Large Millimeter/submillimeter Array (ALMA). This result has a transformative impact on the theories of planet formation and gives us a clue to the origin of a wide variety of planetary systems.

The research team, led by astronomers at Osaka University and Ibaraki University, observed a young star named HD142527 in the constellation Lupus (the Wolf) with ALMA. The ALMA image shows that cosmic dust, which is component material of planets, is circling around the star in a form of asymmetric ring. By measuring the density of dust in the densest part of the ring, the astronomers found that it is highly possible that planets are now being formed in that region. This region is far from the central star, about 5 times larger than the distance between the Sun and the Neptune. This is the first firm evidence of planet formation found so far from the central star in a protoplanetary disk. The research team plans further observations of HD142527 with ALMA for closer investigation, as well as other protoplanetary disks to have a comprehensive understanding of the planet formation in general.

More than 1000 extrasolar planets have been discovered until now, and it is widely recognized that the Sun is not the only star which has planets. In the research of extrasolar planets, astronomers have found a wide variety of planets such as Jupiter-like gaseous giant planets circling around central stars in a much smaller orbit than that of the Mercury, and planets that have a very large orbit far beyond the Neptune’s orbit. While such a diverse range of extrasolar planets have been discovered, the formation process of planets is yet to be well understood. This is one of the top priority issues in modern astronomy and an increasing number of observations have been conducted to explore the planet forming region around young stars.

A baby star is surrounded by a ring of dust (*1) and gas, which would be the component material of planets. Recent near-infrared (*2) observations with the NAOJ Subaru Telescope revealed that protoplanetary disks have structures that are far more complex than we expected. Spiral or gap structures are thought to be associated with hidden planets in the disk (*3). However, it is impossible to measure the amount of dust and gas in the densest part of the disk by near-infrared observations. Since near-infrared light is easily absorbed or scattered by a large amount of dust, it isn’t suitable for observing the innermost part of the dense region of the disk. Then, the key to the solution will be millimeter and submillimeter wave (*4), which can be observed with ALMA. Millimeter/submillimeter wave has longer wavelength than near-infrared light and is poorly absorbed by dust, which enables astronomers to peer into the inner part of the disk. Low spatial resolution was a weak point in millimeter/submillimeter observations, but it is now greatly improved by ALMA.

The research team selected a young star HD142527 in the constellation Lupus (the Wolf) as a target of their ALMA observations. Through their prior observations of the disk around HD142527 with the Subaru Telescope, they discovered a gap inside the disk and peculiar shape of the outer disk (*3). ALMA detected the submillimeter emission from the dust ring around the star (*5). The emission has a non-uniform distribution and the northern side is 30 times brighter than the faint southern side. “We are very surprised at the brightness of the northern side,” said Misato Fukagawa, the leader of the team and an assistant professor at Osaka University. “The brightest part in submillimeter wave is located far from the central star, and the distance is comparable to five times the distance between the Sun and the Neptune. I have never seen such a bright knot in such a distant position. This strong submillimeter emission can be interpreted as an indication that large amount of material is accumulated in this position. When a sufficient amount of material is accumulated, planets or comets can be formed here. To investigate this possibility, we measured the amount of material.”

Figure 1. Dust and gas disk around HD142527. The dust and gas distributions observed by ALMA are shown in red and green, respectively. Near-infrared image taken by the NAOJ Subaru Telescope is shown in blue. The image clearly shows that the dust is concentrated in the northern (upper) part of the disk. The circle in the image shows the position of the dust concentration, in which planets are thought to be formed.
Credit: ALMA (ESO/NAOJ/NRAO), NAOJ, Fukagawa et al.
Image without annotations (PNG/ 101KB) 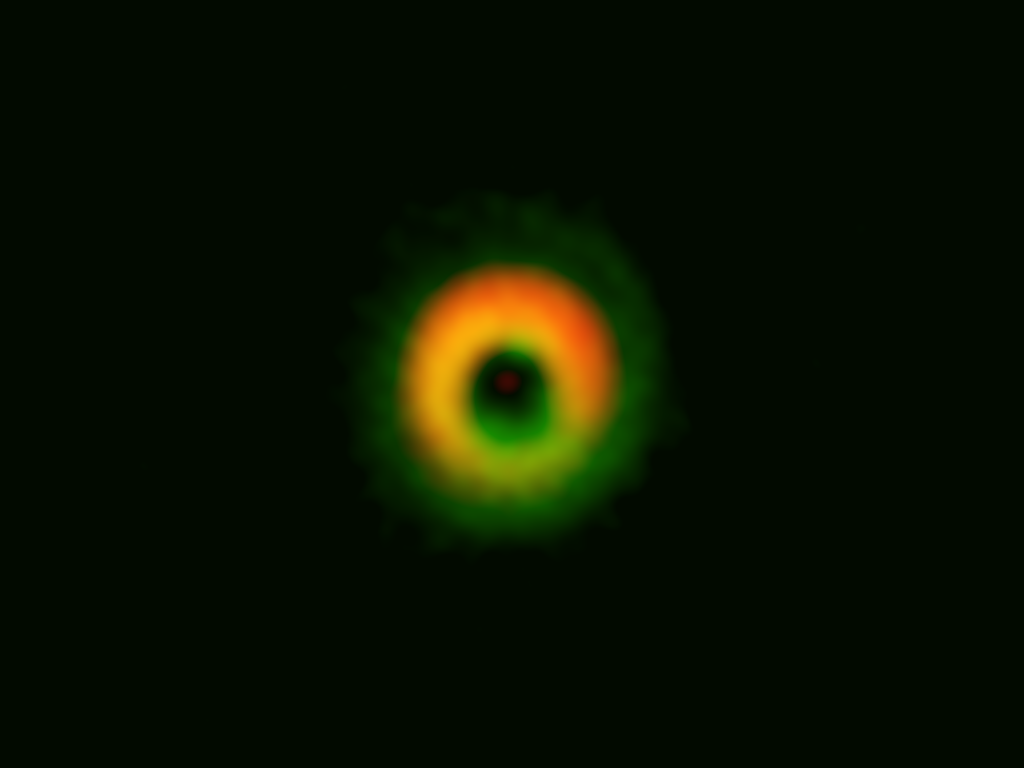 In calculating the amount of material based on the submillimeter emission strength, the temperature of the material is an important parameter. The team estimated the temperature in the dense region from the observations of isotopomers of carbon monoxide. As a result, the team reached two possibilities; gravitational
instability or grain accumulation. If the abundance of dust and gas is comparable to that in typical environment in the universe (the mass ratio of dust and gas is 1 to 100), the dense region is massive enough to attract large amount of gas due to the self-gravity and form giant gaseous planets several times more massive than Jupiter. Although this is similar to the formation process of stars in cosmic clouds, it was the first time that the possibility of such a planet formation process was directly suggested by observations of protoplanetary disks. The other possibility is the formation of “dust trap” in which the abundance of dust is exceptionally higher than the other part of the disk (*6). If the dust trap is formed in the disk, earth-like rocky planets, small bodies such as comets, or cores of gaseous planets may be formed. In both cases, it is highly possible that planets are being formed in the dense part of the disk around HD142527.

The basics of the two planet formation processes mentioned above were predicted theoretically more than 30 years ago. Astronomers assume that the planet formation of our solar system began
with collision and coalescence of huge amount of dust (grain accumulation
model). The concentration of dust would grow into a number of cores of
planets (protoplanets), and these cores evolve into planets through
numerous collisions and coalescences. Some of the cores capture massive
atmosphere to form gaseous giants. Astronomers also assume that some
planets in other planetary systems were formed by gravitational
instability. In both model, it was thought that the planet formation
processes occur close to the central star (around Jupiter and Saturn orbit) in planetary systems similar to our Solar System, but the new ALMA results undermine this conventional assumption. Munetake Momose, a team member and a professor at Ibaraki University says “Seeing the site of planet formation directly is one of the most important goals for ALMA. Our observations successfully located a unique candidate in an unexpectedly distant place from the central star. I believe that ALMA will bring us more surprising results.”

Artist’s impression of the disk around HD142527. The young star HD142527 is surrounded by the dust and gas disk. A number of small dust particles in the disk collide and coalesce together to form protoplanets.
Credit: NAOJ

The research team found out two possibilities in the planet formation process which is taking place in the disk around HD142527. The next step will be a precise measurement of the amount of gas to identify which process is involved. The team will continue detailed observations using ALMA with improved capability. Fukagawa says “HD142527 is a peculiar object, as far as our limited knowledge goes. However, other asymmetrical protoplanetary disks have been discovered since the early ALMA science operation started. Our final goal is to reveal the major physical process which controls the formation of planets. To achieve this goal, it is important to obtain a comprehensive view of the planet formation through observations of many protoplanetary disks. We hope to be part of this great venture.”

*1: Cosmic dust consists of small solid particles composed of silicon, carbon, iron and other elements about the size of 0.1 micrometer. The dust particles in the disk around HD142527 are thought to grow over the size of 1 millimeter.

*2: Near-infrared light is a portion of electromagnetic wave at the wavelength of 0.7 to 3 micrometers.

*3: For reference, the following results are published by the NAOJ Subaru Telescope.

*5: The asymmetric shape of the disk around HD142527 has been observed by the Submillimeter Array (SMA) in Hawaii and the prior ALMA observations as follows.

*6: A dust trap is a spot where the dust particles are collected and remain for a long time. In a theoretical prediction, the dust trap was defined as the first step of the planet formation to make possible effective coalescence of dust. There are several possibilities in the dust trap formation mechanism; one possibility is a vortex of gas in the protoplanetary disk. The presence of the dust trap was first confirmed by recent ALMA observations.

The research findings are presented in the article Fukagawa et al. “Local Enhancement of Surface Density in the Protoplanetary Ring Surrounding HD 142527” published in the Publications of the Astronomical Society of Japan, on December 25th, 2013. 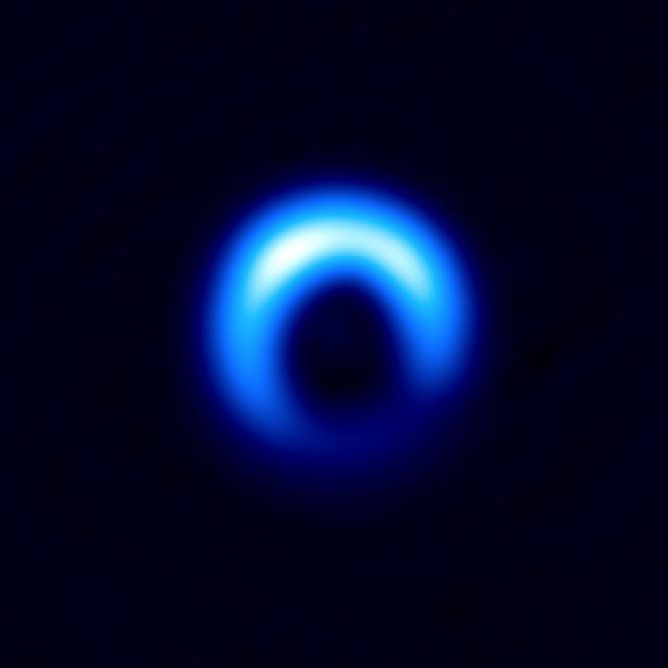 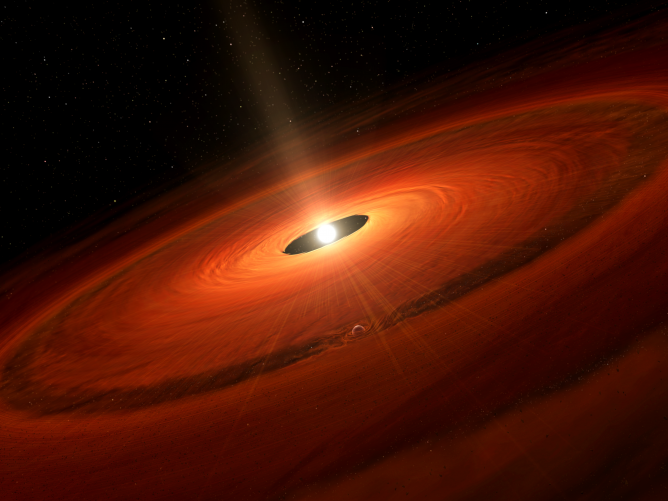 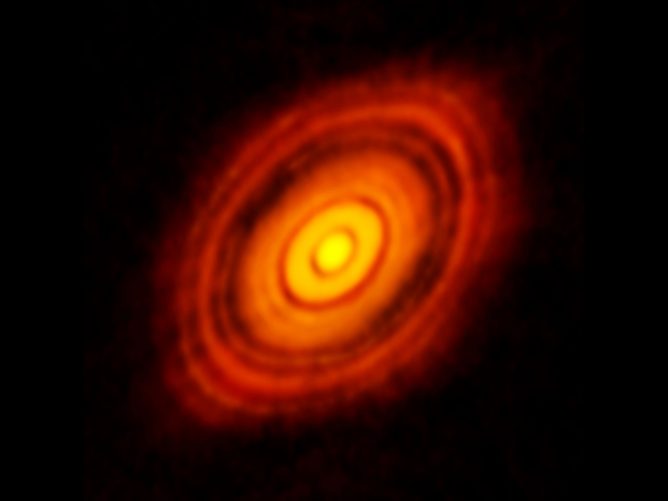