Astronomers using the Atacama Large Millimeter/submillimeter Array (ALMA) have made the first-ever observations of a circumplanetary disk, the planet-girding belt of dust and gas that astronomers strongly theorize controls the formation of planets and give rise to an entire system of moons, like the one around Jupiter. 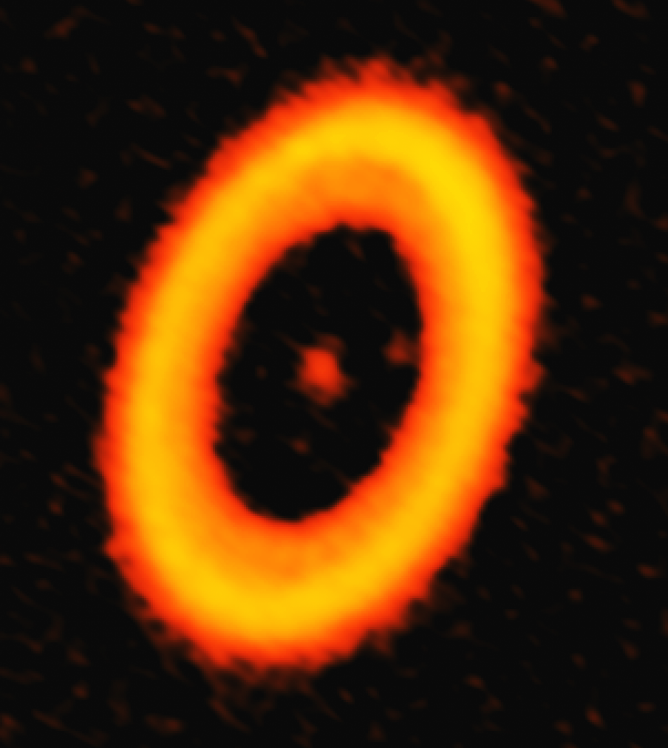 ALMA image of the dust in PDS 70, a star system located approximately 370 light-years from Earth. Two faint smudges in the gap region of this disk are associated with newly formed planets. One such concentration of dust is a circumplanetary disk, the first such feature ever detected around a distant star. Credit: ALMA (ESO/NAOJ/NRAO); A. Isella.

This young star system, PDS 70, is located approximately 370 light-years from Earth. Recently, astronomers confirmed the presence of two massive, Jupiter-like planets in orbit around the star. This discovery was made with the European Southern Observatory’s Very Large Telescope, which detected the warm glow naturally emitted by hydrogen gas accreting onto the planets.

The new ALMA observations instead image the faint radio waves given off by the tiny (about one tenth of a millimeter across) particles of dust around the star.

The ALMA data, combined with the earlier optical and infrared VLT observations, provide compelling evidence that a dusty disk capable of forming multiple moons surrounds the outermost known planet in the system.

“For the first time, we can conclusively see the telltale signs of a circumplanetary disk, which helps to support many of the current theories of planet formation,” said Andrea Isella, an astronomer at Rice University in Houston, Texas, and lead author on a paper published in the Astrophysical Journal, Letters. “By comparing our observations to other high-resolution optical images, we can clearly see that an otherwise enigmatic concentration of tiny dust particles is actually a planet-girding disk of dust, the first such feature ever conclusively observed,” he said. According to the researchers, this is the first time that a planet has been seen in these three distinct bands of light (optical, infrared, and radio).

Unlike the icy rings of Saturn, which likely formed by the crashing together of comets and rocky bodies relatively recently in the history of our Solar System, a circumplanetary disk is the lingering remains of the planet-formation process. 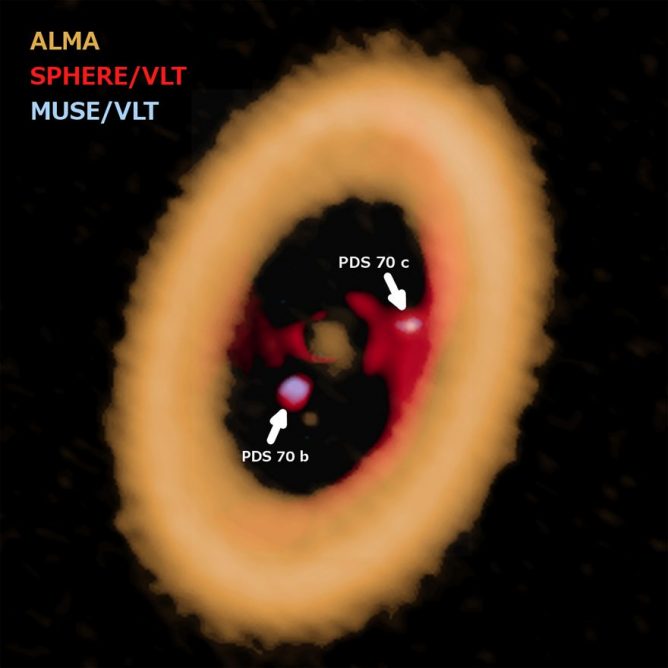 Composite image of PDS 70. Comparing new ALMA data to earlier VLT observations, astronomers determined that the young planet designated PDS 70 c has a circumplanetary disk, a feature that is strongly theorized to be the birthplace of moons. Credit: ALMA (ESO/NAOJ/NRAO) A. Isella; ESO.

The ALMA data also revealed two distinct differences between the two newly discovered planets. The closer in of the two, PDS 70 b, which is about the same distance from its star as Uranus is from the Sun, has a trailing mass of dust behind it resembling a tail. “What this is and what it means for this planetary system is not yet known,” said Isella. “The only conclusive thing we can say is that it is far enough from the planet to be an independent feature.”

The second planet, PDS 70 c, resides in the same location as a clear knot of dust seen in the ALMA data. Since this planet is shining so brightly in the infrared and hydrogen bands of light, the astronomers can conclusively say that a fully formed planet is already in orbit there and that nearby gas continues to be syphoned onto the planet’s surface, finishing its adolescent growth spurt.

This outer planet is located approximately 5.3 billion kilometers from the host star, about the same distance as Neptune from our Sun. Astronomers estimate that this planet is approximately 1 to 10 times the mass of Jupiter. “If the planet is on the larger end of that estimate, it’s quite possible for there might be planet-size moons in formation,” noted Isella.

The ALMA observation also add another important element to these observations. Optical studies of planetary systems are notoriously challenging. Since the star is so much brighter than the planets, it’s difficult to filter out the glare, much like spotting a firefly next to a search light. ALMA observations, however, don’t have that limitation since stars emit very little light at millimeter and submillimeter wavelengths. “This means we’ll be able to come back to this system at different periods and more easily map the orbit of the planets and the concentration of dust in the system,” concluded Isella. “This will give us unique insights into the orbital properties of solar systems in their very earliest stages of development.”

Paper and Research Team
These observation results were published as “Detection of continuum submillimeter emission associated with candidate protoplanets” in the Astrophysical Journal Letters on July 11, 2019. 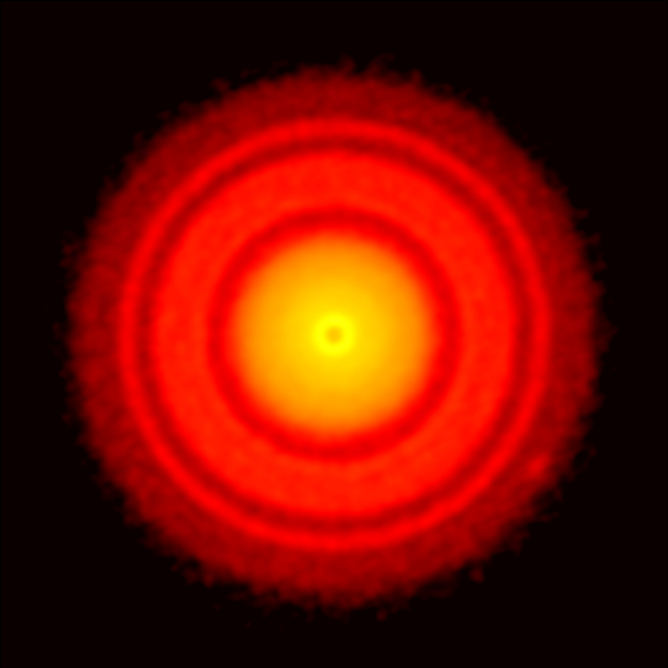