Researchers using the Atacama Large Millimeter/submillimeter Array (ALMA) discovered a titanic galactic wind driven by a supermassive black hole 13.1 billion years ago. This is the earliest-yet-observed example of such a wind to date and is a telltale sign that huge black holes have a profound effect on the growth of galaxies from the very early history of the Universe.
share
tweet 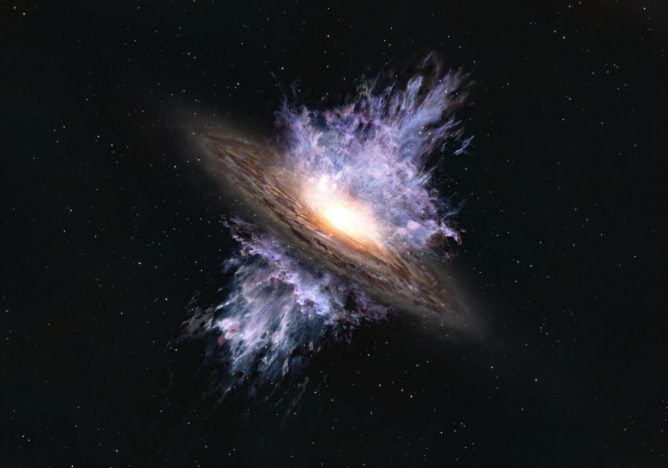 Artist’s impression of a galactic wind driven by a supermassive black hole located in the center of a galaxy. The intense energy emanating from the black hole creates a galaxy-scale flow of gas that blows away the interstellar matter that is the material for forming stars.
Credit: ALMA (ESO/NAOJ/NRAO)

At the center of many large galaxies hides a supermassive black hole that is millions to billions of times more massive than the Sun. Interestingly, the mass of the black hole is roughly proportional to the mass of the central region (bulge) of the galaxy in the nearby Universe. At first glance, this may seem obvious, but it is actually very strange. The reason is that the sizes of galaxies and black holes differ by about 10 orders of magnitude. Based on this proportional relationship between the masses of two objects that are so different in size, astronomers believe that galaxies and black holes grew and evolved together (coevolution) through some kind of physical interaction.

A galactic wind can provide this kind of physical interaction between black holes and galaxies. A supermassive black hole swallows a large amount of matter. As that matter begins to move at high speed due to the black hole’s gravity it emits intense energy, which can push the surrounding matter outward. This is how the galactic wind is created.

“The question is when did galactic winds come into existence in the Universe?” says Takuma Izumi, the lead author of the research paper and a researcher at the National Astronomical Observatory of Japan (NAOJ). “This is an important question because it is related to an important problem in astronomy: how did galaxies and supermassive black holes coevolve?”

Then, the research team utilized ALMA’s high sensitivity to investigate the gas motion in the host galaxies of the black holes. ALMA observed a galaxy HSC J124353.93+010038.5 (hereafter J1243+0100), discovered by the Subaru Telescope, and captured radio waves emitted by the dust and carbon ions in the galaxy [2] The redshift of this object is z=7.07. Using the cosmological parameters measured with Planck (H0=67.3km/s/Mpc, Ωm=0.315, Λ=0.685: Planck 2013 Results), we can calculate the distance to the object to be 13.1 billion light-years. (Please refer to “Expressing the distance to remote objects” for the details.).

Detailed analysis of the ALMA data revealed that there is a high-speed gas flow moving at 500 km per second in J1243+0100. This gas flow has enough energy to push away the stellar material in the galaxy and stop the star formation activity. The gas flow found in this study is truly a galactic wind, and it is the oldest observed example of a galaxy with a huge wind of galactic size. The previous record holder was a galaxy about 13 billion years ago; so this observation pushes the start back another 100 million years. 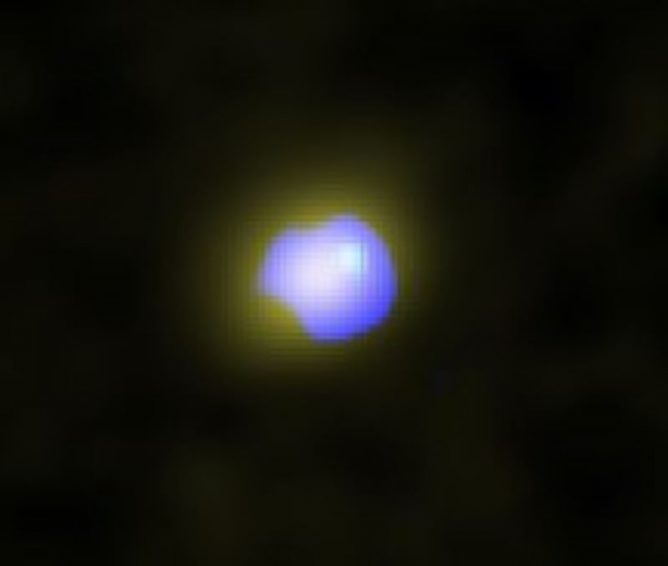 ALMA image of the distant galaxy J1243+0100 hosting a supermassive black hole in its center. The distribution of the quiet gas in the galaxy is shown in yellow and the distribution of high-speed galactic wind is shown in blue. The wind is located in the center of the galaxy, which indicates the wind is driven by the supermassive black hole.
Credit: ALMA (ESO/NAOJ/NRAO), Izumi et al.

“Our observations support recent high-precision computer simulations which have predicted that coevolutionary relationships were in place even at about 13 billion years ago,” comments Izumi. “We are planning to observe a large number of such objects in the future, and hope to clarify whether or not the primordial coevolution seen in this object is an accurate picture of the general Universe at that time.”