TOP
Press Releases
Stellar Cocoon with Organic Molecules at the Edge of our ...

For the first time, astronomers have detected a newborn star and the surrounding cocoon of complex organic molecules at the edge of our Galaxy, which is known as the extreme outer Galaxy. The discovery, which revealed the hidden chemical complexity of our Universe, appears in a paper in The Astrophysical Journal.
share
tweet 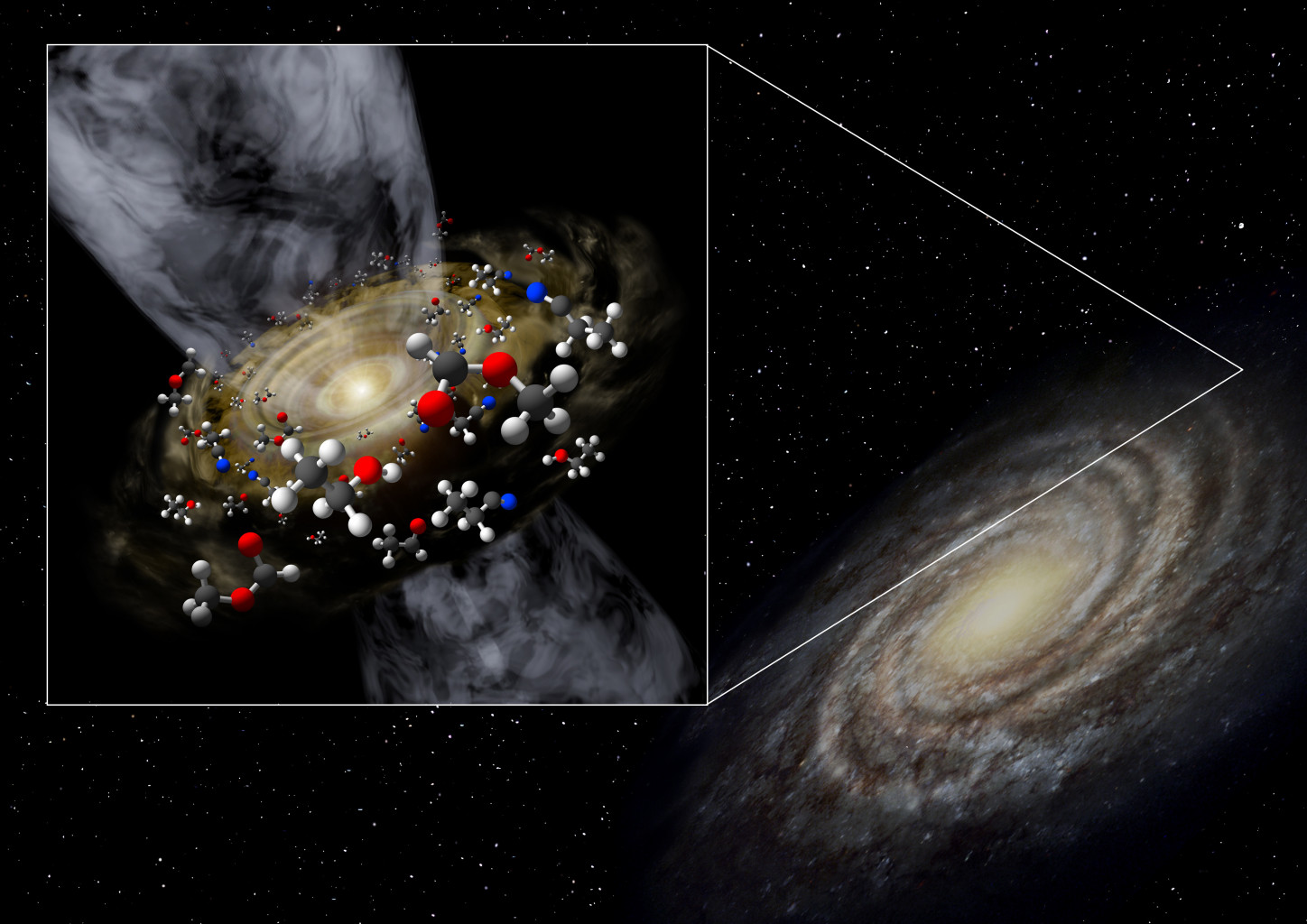 The scientists from Niigata University (Japan), Academia Sinica Institute of Astronomy and Astrophysics (Taiwan), and the National Astronomical Observatory of Japan, used the Atacama Large Millimeter/submillimeter Array (ALMA) in Chile to observe a newborn star (protostar) in the WB89-789 region, located in the extreme outer Galaxy. A variety of carbon-, oxygen-, nitrogen-, sulfur-, and silicon-bearing molecules, including complex organic molecules containing up to nine atoms, were detected. Such a protostar, as well as the associated cocoon of chemically-rich molecular gas, were for the first time detected at the edge of our Galaxy. 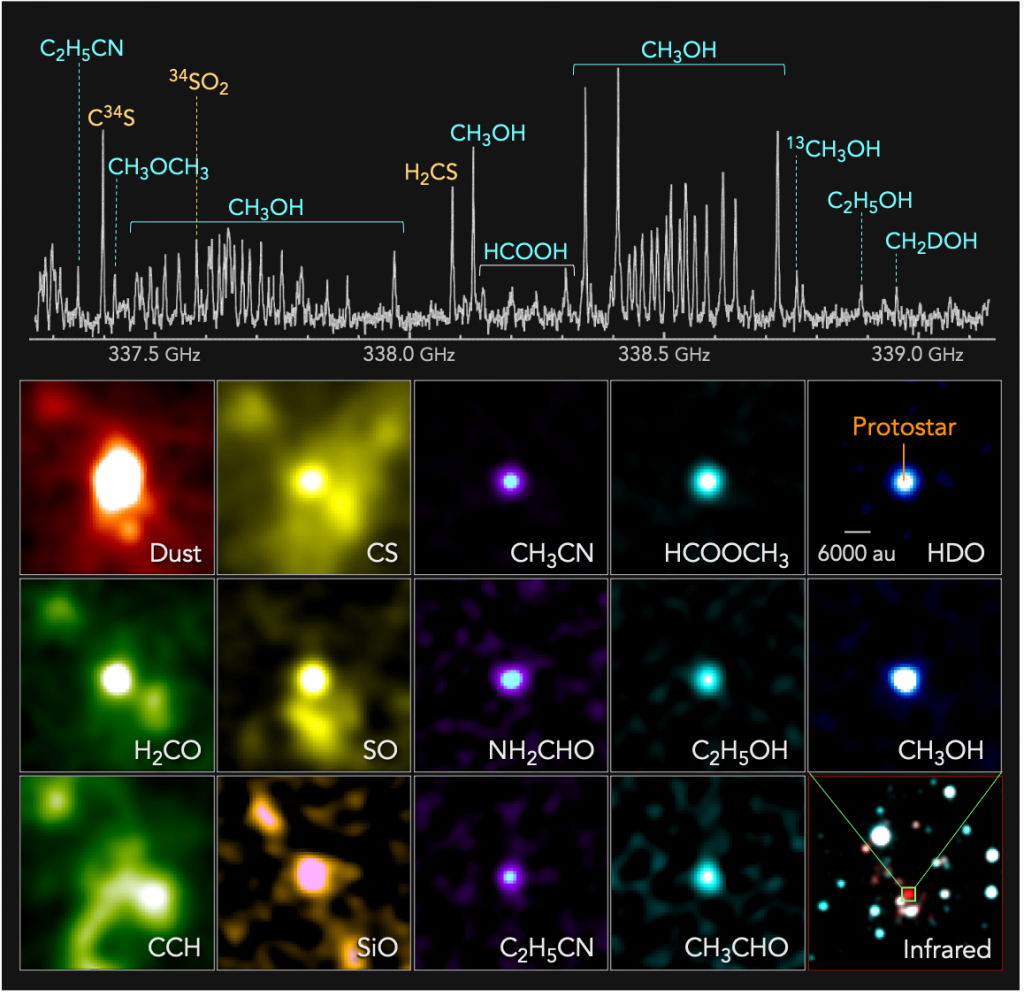 Interestingly, the relative abundances of complex organic molecules in this newly discovered object resemble remarkably well what is found in similar objects in the inner Galaxy. The observations suggest that complex organic molecules are formed with similar efficiency even at the edge of our Galaxy, where the environment is very different from the solar neighborhood.

It is believed that the outer part of our Galaxy still harbors a primordial environment that existed in the early epoch of galaxy formation. The environmental characteristics of the extreme outer Galaxy, e.g., low abundance of heavy elements, small or no perturbation from Galactic spiral arms, are very different from those seen in the present-day solar neighborhood. Because of its unique characteristics, the extreme outer Galaxy is an excellent laboratory to study star formation and the interstellar medium in the past Galactic environment.

“With ALMA we were able to see a forming star and the surrounding molecular cocoon at the edge of our Galaxy,” says Takashi Shimonishi, an astronomer at Niigata University, Japan, and the paper’s lead author. “To our surprise, a variety of abundant complex organic molecules exists in the primordial environment of the extreme outer Galaxy. The interstellar conditions to form the chemical complexity might have persisted since the early history of the Universe,” Shimonishi adds.

“These observations have revealed that complex organic molecules can be efficiently formed even in low-metallicity environments like the outermost regions of our Galaxy. This finding provides an important piece of the puzzle to understand how complex organic molecules are formed in the Universe,” says Kenji Furuya, an astronomer at the National Astronomical Observatory of Japan, and the paper’s co-author.

It is not yet clear, however, if such a chemical complexity is common in the outer part of the Galaxy. Complex organic molecules are of special interest, because some of them are connected to prebiotic molecules formed in space. The team is planning to observe a larger number of star-forming regions in the future, and hopes to clarify whether chemically-rich systems, as seen in our Solar System, are ubiquitous through the history of the Universe.

Paper Information
These observation results were published as Takashi Shimonishi et al. “The detection of a hot molecular core in the extreme outer Galaxy” in the Astrophysical Journal on December 1, 2021 (doi: 10.3847/1538-4357/ac289b).

The Atacama Large Millimeter/submillimeter Array (ALMA), an international astronomy facility, is a partnership of the European Organisation for Astronomical Research in the Southern Hemisphere (ESO), the U.S. National Science Foundation (NSF) and the National Institutes of Natural Sciences (NINS) of Japan in cooperation with the Republic of Chile. ALMA is funded by ESO on behalf of its Member States, by NSF in cooperation with the National Research Council of Canada (NRC) and the Ministry of Science and Technology (MOST) in Taiwan and by NINS in cooperation with the Academia Sinica (AS) in Taiwan and the Korea Astronomy and Space Science Institute (KASI). ALMA construction and operations are led by ESO on behalf of its Member States; by the National Radio Astronomy Observatory (NRAO), managed by Associated Universities, Inc. (AUI), on behalf of North America; and by the National Astronomical Observatory of Japan (NAOJ) on behalf of East Asia. The Joint ALMA Observatory (JAO) provides the unified leadership and management of the construction, commissioning and operation of ALMA.