High resolution observations with the Atacama Large Millimeter/submillimeter Array (ALMA) imaged a rotating dusty gas torus around an active supermassive black hole. The existence of such rotating donuts-shape structures was first suggested decades ago, but this is the first time one has been confirmed so clearly. This is an important step in understanding the co-evolution of supermassive black holes and their host galaxies. 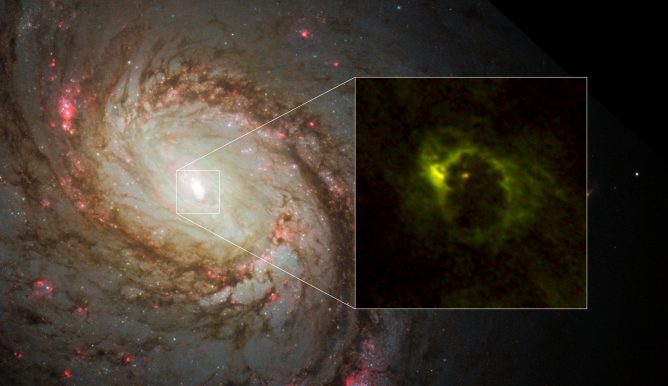 The central region of the spiral galaxy M77. The NASA/ESA Hubble Space Telescope imaged the distribution of stars. ALMA revealed the distribution of gas in the very center of the galaxy. ALMA imaged a horseshoe-like structure with a radius of 700 light-years and a central compact component with a radius of 20 light-years. The latter is the gaseous torus around the AGN. Red indicates emission from formyl ions (HCO+) and green indicates hydrogen cyanide emission.
Credit: ALMA (ESO/NAOJ/NRAO), Imanishi et al., NASA/ESA Hubble Space Telescope and A. van der Hoeven
Download the ALMA image
Credit: ALMA (ESO/NAOJ/NRAO), Imanishi et al.

Almost all galaxies hold concealed monstrous black holes in their centers. Researchers have known for a long time that the more massive the galaxy is, the more massive the central black hole is. This sounds reasonable at first, but host galaxies are 10 billion times bigger than the central black holes; it should be difficult for two objects of such vastly different scales to directly affect each other. So how could such a relation develop?

Aiming to solve this shadowy problem, a team of astronomers utilized the high resolution of ALMA to observe the center of spiral galaxy M77. The central region of M77 is an “active galactic nucleus,” or AGN, which means that matter is vigorously falling toward the central supermassive black hole and emitting intense light. AGNs can strongly affect the surrounding environment, therefore they are important objects for solving the mystery of the co-evolution of galaxies and black holes.

The team imaged the area around the supermassive black hole in M77 and resolved a compact gaseous structure with a radius of 20 light-years. And, the astronomers found that the compact structure is rotating around the black hole, as expected. 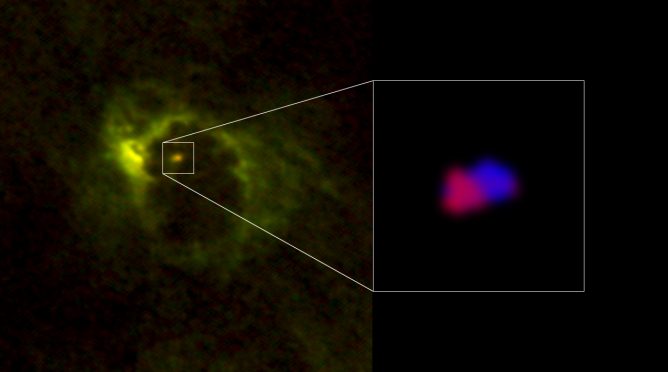 Motion of gas around the supermassive black hole in the center of M77.
The gas moving toward us is shown in blue and that moving away from us is in red. The gas’s rotation is centered around the black hole.
Download the close-up image
Credit: ALMA (ESO/NAOJ/NRAO), Imanishi et al. 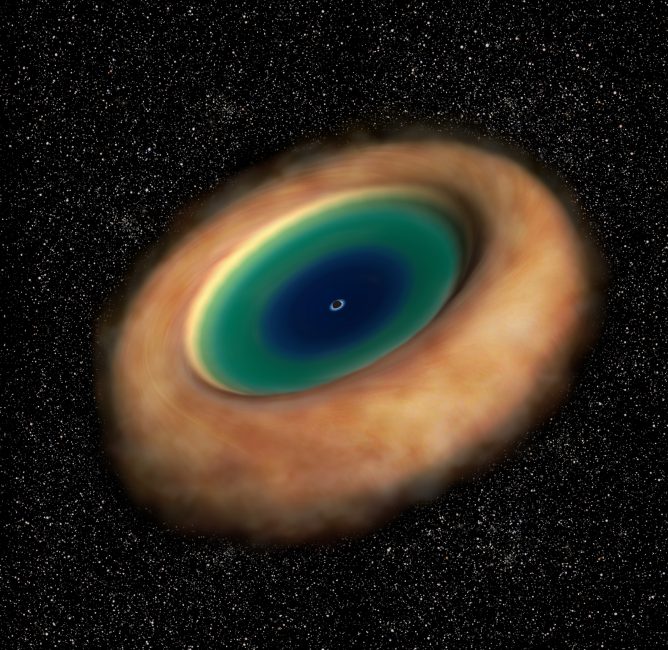 Artist’s impression of the dusty gaseous torus around an active supermassive black hole. ALMA revealed the rotation of the torus very clearly for the first time.
Credit: ALMA (ESO/NAOJ/NRAO)

“To interpret various observational features of AGNs, astronomers have assumed rotating donut-like structures of dusty gas around active supermassive black holes. This is called the ‘unified model’ of AGN,” explained Masatoshi Imanishi (National Astronomical Observatory of Japan), the lead author on a paper published in the Astrophysical Journal Letters. “However, the dusty gaseous donut is very tiny in appearance. With the high resolution of ALMA, now we can directly see the structure.”

Many astronomers have observed the center of M77 before, but never has the rotation of the gas donut around the black hole been seen so clearly. Besides the superior resolution of ALMA, the selection of molecular emission lines to observe was key to revealing the structure. The team observed specific microwave emission from hydrogen cyanide molecules (HCN) and formyl ions (HCO+). These molecules emit microwaves only in dense gas, whereas the more frequently observed carbon monoxide (CO) emits microwaves under a variety of conditions [1] García-Burillo et al. (2016) observed the distribution and motion of CO with ALMA and did not find clear rotation along the east-west torus direction. Their interpretation is that the turbulent motion is so intense that the east-west oriented rotating motion is not clear. Gallimore et al. (2016) also observed CO emission and found gas motion in the north-south direction. They interpret this as outflowing gas from the black hole.. The torus around the AGN is assumed to be very dense, and the team’s strategy was right on the mark.

“Previous observations have revealed the east-west elongation of the dusty gaseous torus. The dynamics revealed from our ALMA data agrees exactly with the expected rotational orientation of the torus,” said Imanishi.

Interestingly, the distribution of gas around the supermassive black hole is much more complicated than what a simple unified model suggests. The torus seems to have an asymmetry and the rotation is not just following the gravity of the black hole but also contains highly random motion. These facts could indicate the AGN had a violent history, possibly including a merger with a small galaxy [2] Recently, astronomers used the Subaru Telescope to observe M77 and revealed signatures of a merger with a small galaxy billions of years ago. For details, please read the press release “Minor Merger Kicks Supermassive Black Hole into High Gear” issued in October 2017 from the Subaru Telescope.. Nevertheless, the identification of the rotating torus is an important step.

The Milky Way Galaxy, where we live, also has a supermassive black hole at its center. This black hole is, however, in a very quiet state. Only a tiny amount of gas is accreting onto it. Therefore, to investigate an AGN in detail, astronomers need to observe the centers of distant galaxies. M77 is one of the nearest AGN and a suitable object for peering into the very center in detail.

This research was supported by the Japan Society for the Promotion of Science KAKENHI (Grant Numbers 15K05030 and 16H03959). 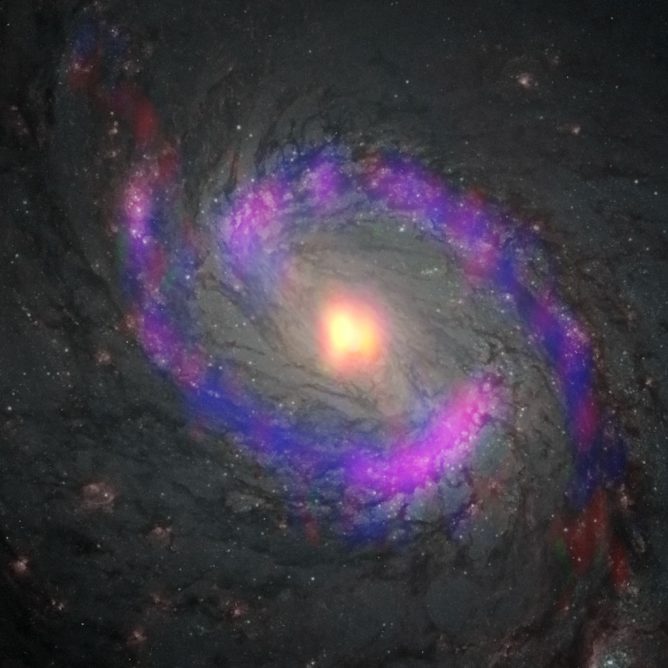 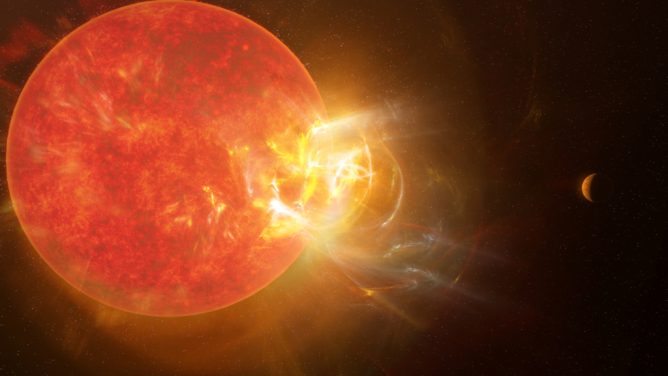 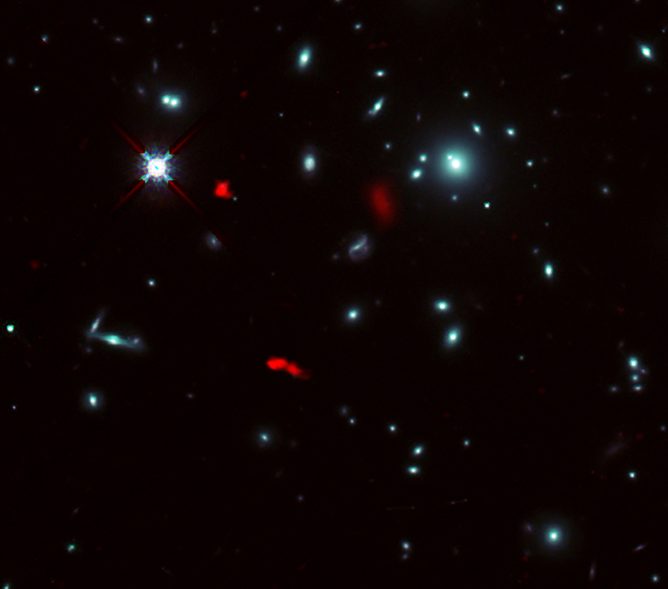