A research team using the Atacama Large Millimeter/submillimeter Array (ALMA) has detected the faintest millimeter-wave source ever observed. By accumulating millimeter-waves from faint objects like this throughout the Universe, the team finally determined that such objects are 100% responsible for the enigmatic infrared background light filling the Universe. By comparing these to optical and infrared images, the team found that 60% of them are faint galaxies, whereas the rest have no corresponding objects in optical/infrared wavelengths and their nature is still unknown.

The origins of the first two have already been revealed. The COB comes from a huge number of stars, and the CMB comes from hot gas just after the Big Bang. However, the origin of the CIB was still to be solved. Various research projects, including past ALMA observations, have been conducted, but they could only explain half of the CIB.

A research team led by a graduate student, Seiji Fujimoto, and an associate professor, Masami Ouchi, at the University of Tokyo, tackled this mysterious infrared background by examining the ALMA data archive. ALMA is the perfect tool to investigate the source of the CIB thanks to its unprecedented sensitivity and resolution.

They went through the vast amount of ALMA data taken during about 900 days in total looking for faint objects. They also searched the datasets extensively for lensed sources, where huge gravity has magnified the source making even fainter objects visible.

“The origin of the CIB is a long-standing missing piece in the energy coming from the Universe,” said Seiji Fujimoto, now studying at the Institute of Cosmic Ray Research, the University of Tokyo. “We devoted ourselves to analyzing the gigantic ALMA data in order to find the missing piece.”

Finally, the team discovered 133 faint objects, including an object five times fainter than any other ever detected. The researchers found that the entire CIB can be explained by summing up the emissions from such objects (note). 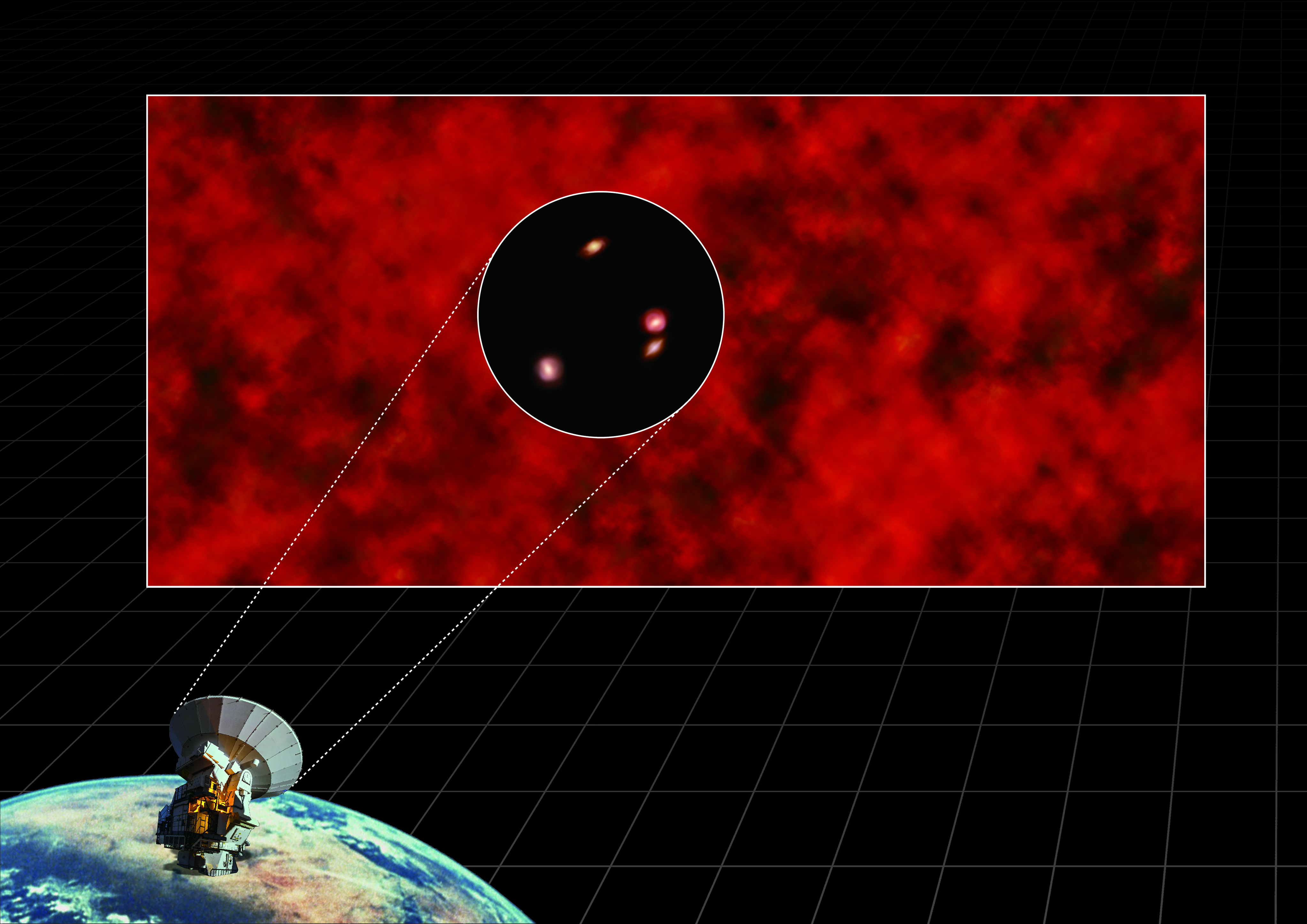 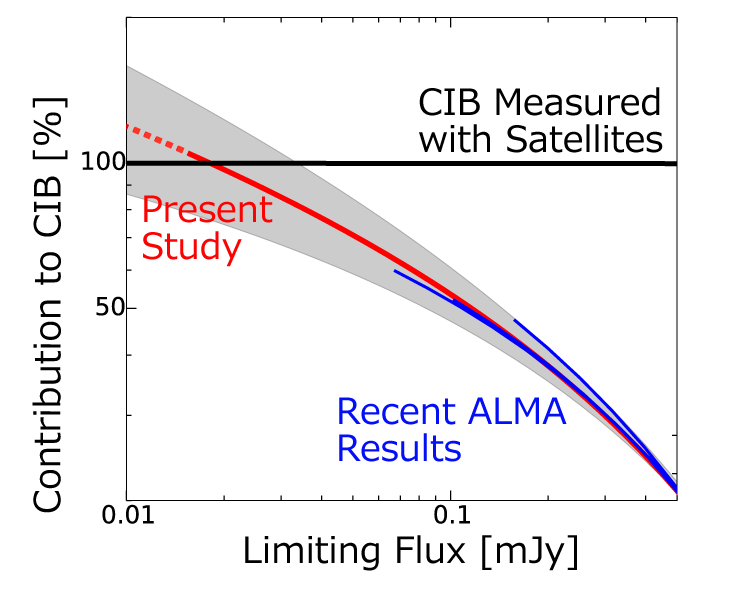 Figure 1. (Upper) Artist’s impression of the Cosmic Infrared Background resolved with ALMA. Credit: NAOJ, Fujimoto et al. (Lower) This diagram shows that the sum of the emissions from the faint objects detected with ALMA reaches the CIB measured with satellite observations. High resolution file of the artist’s impression can be downloaded from here. Credit: NAOJ, Fujimoto et al.

What is the nature of those sources? By comparing the ALMA data with the data taken by the Hubble Space Telescope and the Subaru Telescope, the team found that 60% of them are galaxies which can also be seen in the optical/infrared images. Dust in galaxies absorbs optical and infrared light and re-emits the energy in longer millimeter waves which can be detected with ALMA.
“However, we have no idea what the rest of them are. I speculate that they are galaxies obscured by dust. Considering their darkness, they would be very low-mass galaxies.” Masami Ouchi explained passionately. “This means that such small galaxies contain great amounts of dust. That conflicts with our current understanding: small galaxies should contain small amounts of dust. Our results might indicate the existence of many unexpected objects in the distant Universe. We are eager to unmask these new enigmatic sources with future ALMA observations.”

Figure 3. Breakdown chart of the faint objects detected with ALMA. 60% of them have corresponding optical/infrared galaxies, whereas the remaining 40% are invisible in other wavelength. Credit: ALMA (ESO/NAOJ/NRAO), NAOJ, Fujimoto et al.

Note: ALMA detected a part of the CIB with 1 mm wavelengths. The CIB in millimeter and submillimeter waves does not become weak even if the source is located far away. Therefore this wavelength is suitable for looking through the Universe to the most distant parts.

These observational results were published as Fujimoto et al. “ALMA Census of Faint 1.2 mm Sources Down to ~ 0.02 mJy: Extragalactic Background Light and Dust-poor, High-z Galaxies” in the Astrophysical Journal Supplement, issued in December 28, 2015.
This research is supported by the World Premier International Research Center Initiative (WPI Initiative), MEXT, Japan, and KAKENHI Grant-in-Aid for Scientific Research through the Japan Society for the Promotion of Science (JSPS).

The Atacama Large Millimeter/submillimeter Array (ALMA), an international astronomy facility, is a partnership of the European Organisation for Astronomical Research in the Southern Hemisphere (ESO), the U.S. National Science Foundation (NSF) and the National Institutes of Natural Sciences (NINS) of Japan in cooperation with the Republic of Chile. ALMA is funded by ESO on behalf of its Member States, by NSF in cooperation with the National Research Council of Canada (NRC) and the National Science Council of Taiwan (NSC) and by NINS in cooperation with the Academia Sinica (AS) in Taiwan and the Korea Astronomy and Space Science Institute (KASI). ALMA construction and operations are led by ESO on behalf of its Member States; by the National Radio Astronomy Observatory (NRAO), managed by Associated Universities, Inc. (AUI), on behalf of North America; and by the National Astronomical Observatory of Japan (NAOJ) on behalf of East Asia. The Joint ALMA Observatory (JAO) provides the unified leadership and management of the construction, commissioning and operation of ALMA.
Tags : ALMA Discoveries Press Releases Cosmic Mysteries 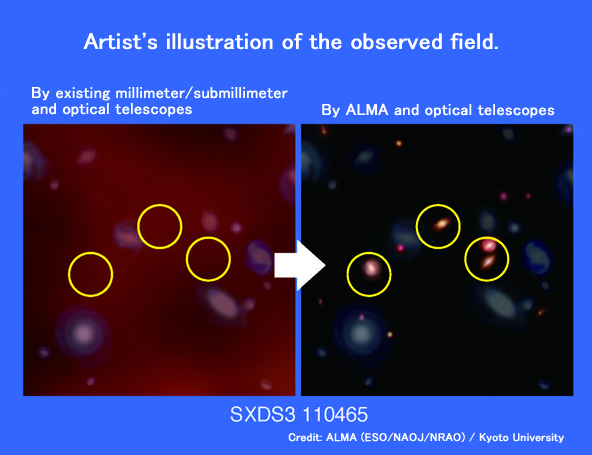