Astronomers detected a faint but definite signal of oxygen in a galaxy located 13.28 billion light-years away from us, through observations using the Atacama Large Millimeter/submillimeter Array (ALMA). Breaking their own records, this marks the most distant oxygen ever detected in the Universe. Referencing infrared observations, the team determined that star formation in the galaxy started at an unexpectedly early stage; 250 million years after the Big Bang.

“Rather than saying I was happy, it would be more accurate to say I was thrilled to see the signal of the most distant oxygen,” explains Takuya Hashimoto, the lead author of the research paper published in the journal Nature and a researcher at Osaka Sangyo University and the National Astronomical Observatory of Japan. “I was excited enough that the signal appeared in my dreams and I had difficulty sleeping that night.”

An international team of astronomers led by Hashimoto used ALMA to observe a distant galaxy called MACS1149-JD1. They detected a signal from ionized oxygen in the galaxy. The infrared light emitted from oxygen was stretched to microwave wavelengths by the expansion of the Universe before it reached Earth and was observed by ALMA. The team measured the change in the wavelength of the light and found that the signal had traveled 13.28 billion light-years [1] The measured redshift of Galaxy MACS1149-JD1 is z=9.11. A calculation based on the latest cosmological parameters measured with Planck (H0=67.3 km/s/Mpc, Ωm=0.315, Λ=0.685: Planck 2013 Results) yields the distance of 13.28 billion light-years. Please refer to “Expressing the distance to remote objects” for the details. to reach us, making it the most distant, or oldest, oxygen ever detected by any telescope. In addition, a weaker signal of neutral hydrogen emissions was independently found with the European Southern Observatory’s Very Large Telescope; the distance determined from this observation is consistent with the distance based on the oxygen observation. MACS1149-JD1 is the most distant galaxy with a precise distance measurement [2] The galaxy GN-z11 is thought to be located 13.4 billion light-years away based on observations with the Hubble Space Telescope (HST). But the precision of the distance measurement with HST low resolution spectroscopy is significantly lower than that of ALMA’s measurement using a single emission line from atoms..

For a certain period after the Big Bang, there was no oxygen in the Universe. Oxygen was created in stars and then released when the stars died. The detection of oxygen in MACS1149-JD1 indicates that an earlier generations of stars had been already formed and expelled processed oxygen by the epoch of observation, which is only about 500 million years after the beginning of the Universe.

“The mature stellar population in MACS1149-JD1 implies that stars were forming back to even earlier times, beyond what we can currently see with our telescopes. This has very exciting implications for finding `cosmic dawn’ when the first galaxies emerged” adds Nicolas Laporte, a researcher at University College London/Université de Toulouse and a member of the research team.

ALMA has set the record for the most distant oxygen several times. In 2016, Akio Inoue at Osaka Sangyo University and his colleagues found the signal of oxygen at 13.1 billion light-years away with ALMA [3] See details in the ALMA press release “ALMA Detected the Most Distant Oxygen” in June 2016.. Several months later, Nicolas Laporte and his team used ALMA to detect oxygen at 13.2 billion light-years away [4] See details in the ALMA press release “Ancient Stardust Sheds Light on the First Stars—Most distant object ever observed by ALMA” in March 2017.. Now, the two teams merged into one and achieved this new record. “This reflects the both competitive and collaborative nature of the forefront of scientific research,” said Inoue.

“With this discovery we managed to reach the earliest phase of cosmic star formation history,” said Hashimoto. “We are eager to find oxygen in even farther parts of the Universe and expand the horizon of human knowledge.” 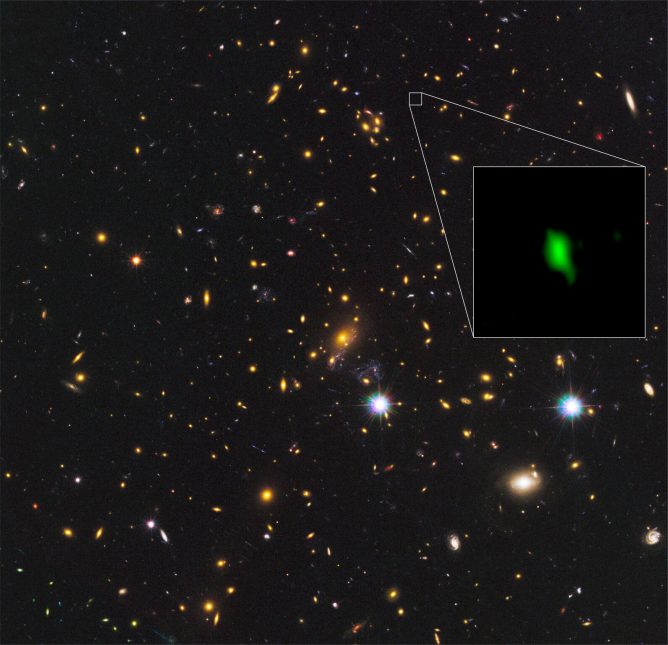 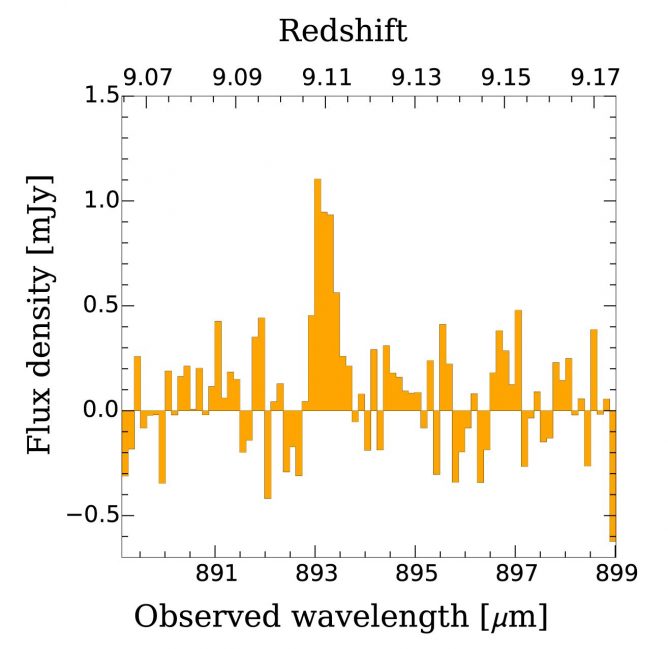 Microwave spectrum of oxygen ions in MACS1149-JD1 detected with ALMA. It was originally infrared light with a wavelength of 88 micrometers, and ALMA detected it as microwaves with an increased wavelength of 893 micrometers due to the expansion of the Universe.
Credit: ALMA (ESO/NAOJ/NRAO), Hashimoto et al.

Computer graphics movie of the star formation history in the galaxy MACS1149-JD1. The self-gravity of matter creates filamentary structures and the density at the intersections of the filaments increases. Around 200 million years after the Big Bang, active star formation ignites in the high density regions, which leads to the formation of galaxies. The gas in the galaxy is blown off by active stellar wind and supernovae, then the gas returns to the galaxy and causes another burst of star formation.
Download the movie file with English caption.
Download the movie file without caption.
Credit: ALMA (ESO/NAOJ/NRAO)

These observation results are published as Hashimoto et al. “The onset of star formation 250 million years after the Big Bang” in Nature on May 16, 2018. 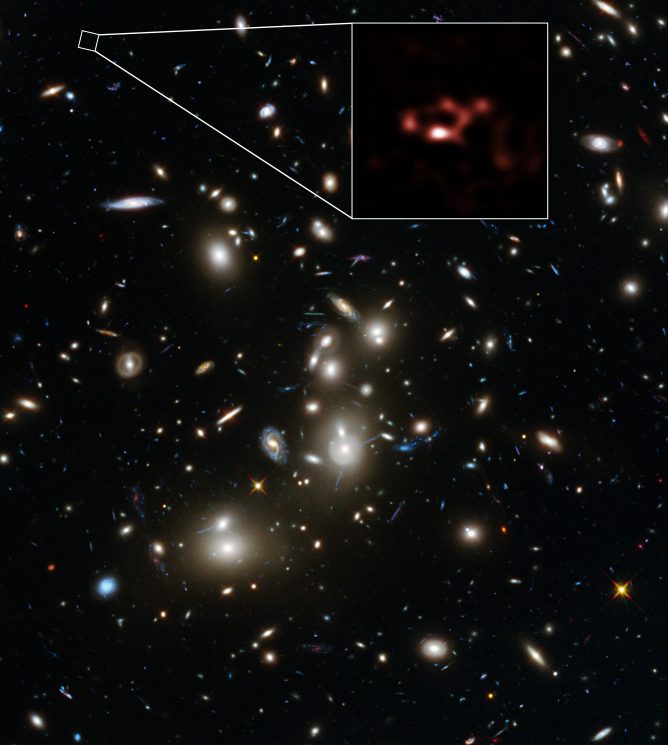 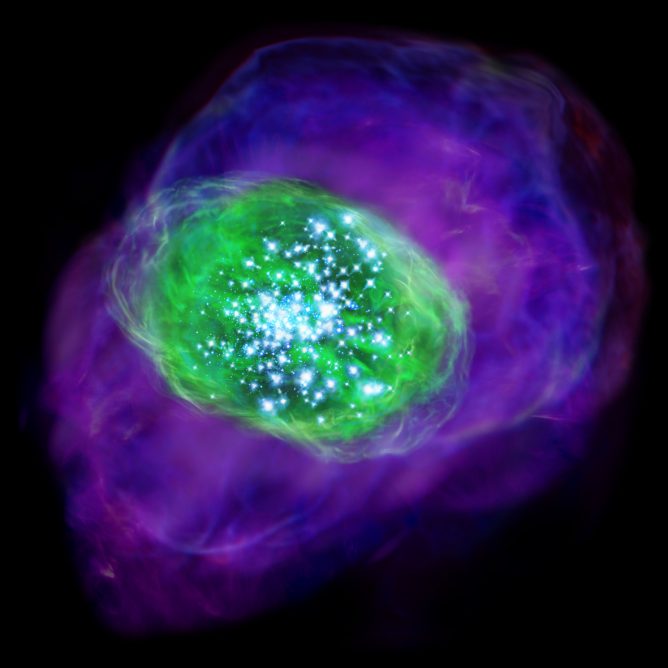 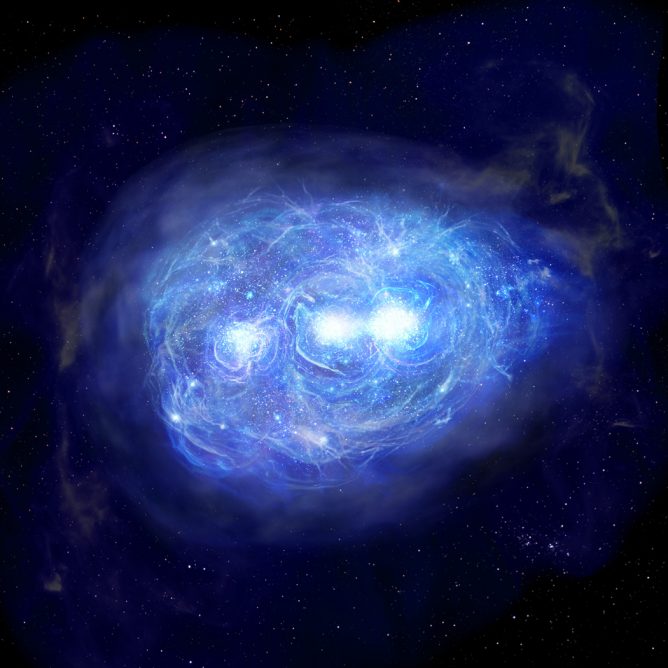