ALMA Discovers the Most Ancient Galaxy with Spiral Morphology

Analyzing data obtained with the Atacama Large Millimeter/submillimeter Array (ALMA), researchers found a galaxy with a spiral morphology by only 1.4 billion years after the Big Bang. This is the most ancient galaxy of its kind ever observed. The discovery of a galaxy with a spiral structure at such an early stage is an important clue to solving the classic questions of astronomy: “How and when did spiral galaxies form?”
share
tweet 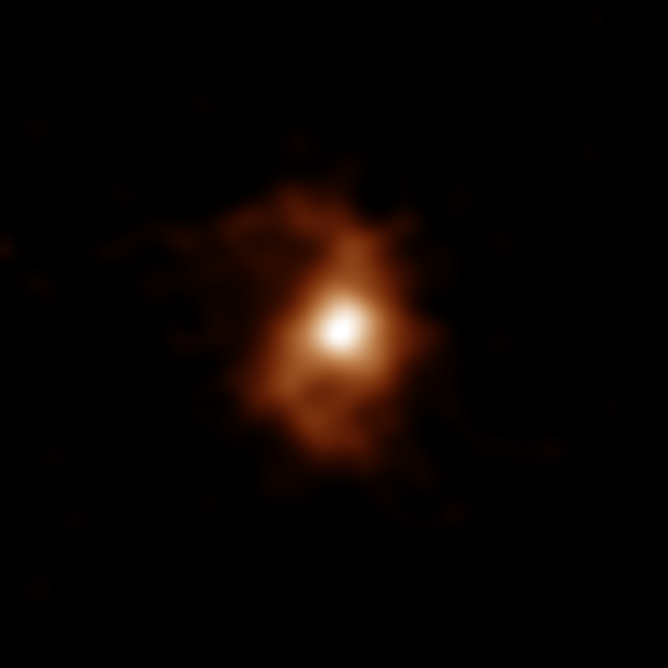 ALMA image of the galaxy BRI 1335-0417 at 12.4 billion years ago. ALMA detected emissions from carbon ions in the galaxy. Spiral arms are visible on both sides of the compact, bright area in the center of the galaxy.
Credit: ALMA (ESO/NAOJ/NRAO), T. Tsukui & S. Iguchi

“I was excited because I had never seen such clear evidence of a rotating disk, spiral structure, and centralized mass structure in a distant galaxy in any previous literature,” says Takafumi Tsukui, a graduate student at SOKENDAI and the lead author of the research paper published in the journal Science. “The quality of the ALMA data was so good that I was able to see so much detail that I thought it was a nearby galaxy.”

The Milky Way Galaxy, where we live, is a spiral galaxy. Spiral galaxies are fundamental objects in the Universe, accounting for as much as 70% of the total number of galaxies. However, other studies have shown that the proportion of spiral galaxies declines rapidly as we look back through the history of the Universe. So, when were the spiral galaxies formed?

Tsukui and his supervisor Satoru Iguchi, a professor at SOKENDAI and the National Astronomical Observatory of Japan, noticed a galaxy called BRI 1335-0417 in the ALMA Science Archive. The galaxy existed 12.4 billion years ago [1] The redshift of this object is z=4.41. Using the cosmological parameters measured with Planck (H0=67.3km/s/Mpc, Ωm=0.315, Λ=0.685: Planck 2013 Results), we can calculate the distance to the object to be 12.4 billion light-years. (Please refer to “Expressing the distance to remote objects” for the details.)  and contained a large amount of dust, which obscures the starlight. This makes it difficult to study this galaxy in detail with visible light. On the other hand, ALMA can detect radio emissions from carbon ions in the galaxy, which enables us to investigate what is going on in the galaxy.

The researchers found a spiral structure extending about 15,000 light-years from the center of the galaxy. This is one third of the size of the Milky Way Galaxy. The estimated total mass of the stars and interstellar matter in BRI 1335-0417 is roughly equal to that of the Milky Way.

Then the question becomes, how was this distinct spiral structure formed in only 1.4 billion years after the Big Bang? The researchers considered multiple possible causes and suggested that it could be due to an interaction with a small galaxy. BRI 1335-0417 is actively forming stars and the researchers found that the gas in the outer part of the galaxy is gravitationally unstable, which is conducive to star formation. This situation is likely to occur when a large amount of gas is supplied from outside, possibly due to collisions with smaller galaxies.

Supercomputer simulation of spiral galaxy formation. Over a period of about 13.5 billion years, small galaxies merge one after another into a single giant spiral galaxy. Please note that this video was created in 2007 and is not a reproduction of the current study.
Credit: Takaaki Takeda, Sorahiko Nukatani, Takayuki Saito, 4D2U Project, NAOJ

The fate of BRI 1335-0417 is also shrouded in mystery. Galaxies that contain large amounts of dust and actively produce stars in the ancient Universe are thought to be the ancestors of the giant elliptical galaxies in the present Universe. In that case, BRI 1335-0417 changes its shape from a disk galaxy to an elliptical one in the future. Or, contrary to the conventional view, the galaxy may remain a spiral galaxy for a long time. BRI 1335-0417 will play an important role in the study of galaxy shape evolution over the long history of the Universe.

“Our Solar System is located in one of the spiral arms of the Milky Way,” explains Iguchi. “Tracing the roots of spiral structure will provide us with clues to the environment in which the Solar System was born. I hope that this research will further advance our understanding of the formation history of galaxies.”

Paper Information
These research results are presented in T. Tsukui & S. Iguchi “Spiral morphology in an intensely star-forming disk galaxy more than 12 billion years ago” published online by the journal Science on THURSDAY, 20 May, 2021.