Researchers analyzed the accumulated data from the Atacama Large Millimeter/submillimeter Array (ALMA) and depicted the motion of a young twin star system XZ Tauri over three years. This first-ever “ALMA Animation” of twin stars sheds new light on the origins of the binary stars and the planets to be formed around them.
share
tweet 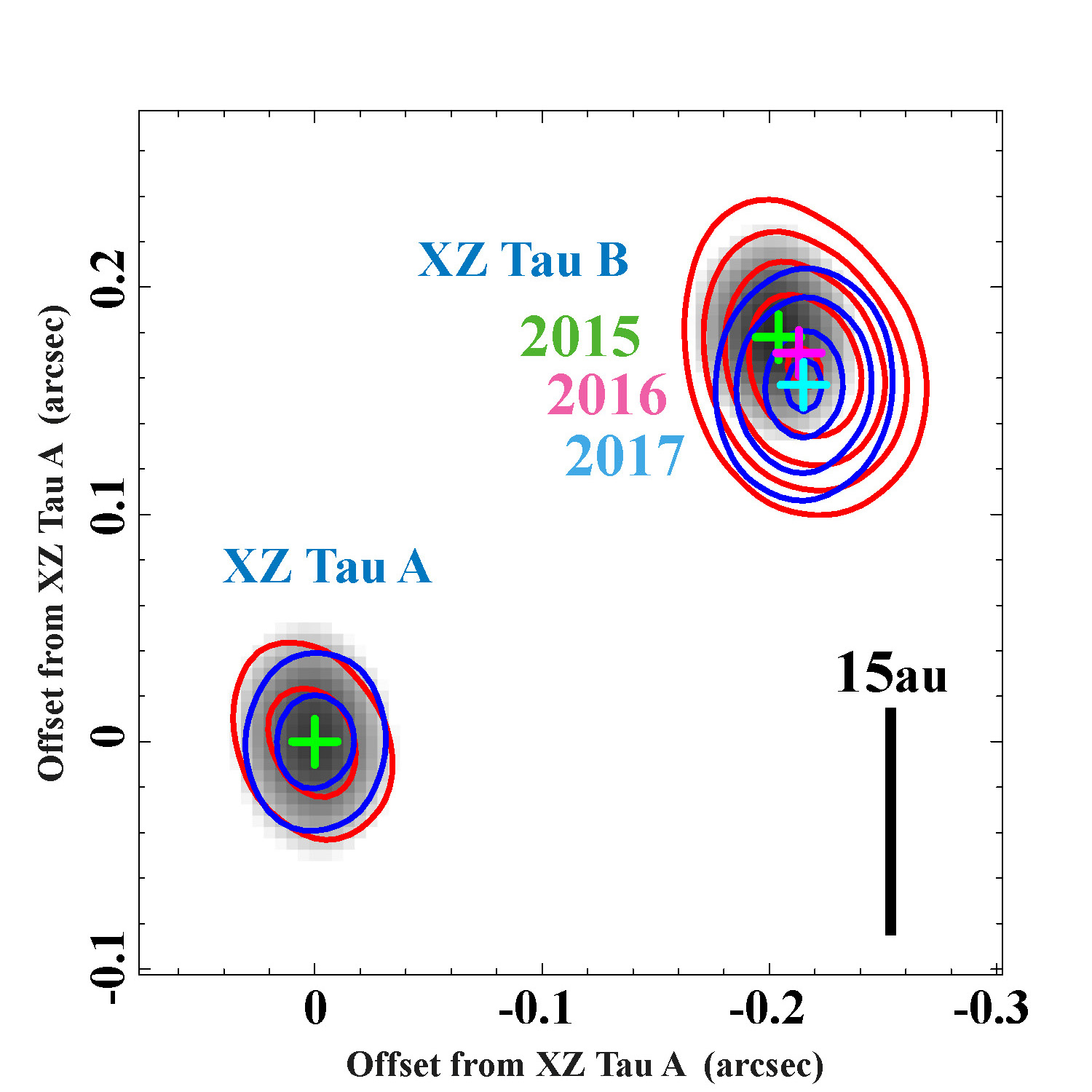 Orbital motion of the young binary XZ Tau system. The location of XZ Tau A (lower-left) is fixed in the image and the relative motion of XZ Tau B is shown. The distributions of the radio waves from the protoplanetary disks are shown in gray scale (2015), red contours (2016), and blue contours (2017). The location of each star is shown as a plus sign.
Credit: ALMA (ESO/NAOJ/NRAO), T. Ichikawa et al.

Animated orbital motion of the young binary XZ Tau system. The location of XZ Tau A (lower-left) is fixed in the image and the relative motion of XZ Tau B is shown. The distributions of the radio waves from the protoplanetary disks are shown in gray scale and contours. The location of each star is shown as a plus sign.
Credit: ALMA (ESO/NAOJ/NRAO), T. Ichikawa et al.

“This achievement was made possible by the high resolution and rich archival data of ALMA,” says Takanori Ichikawa, the first author of the research paper and a former graduate student at Kagoshima University, Japan. “This research utilized three years of observation data. The results show the feasibility of a new research method using radio astronomical animations instead of conventional images. I hope that this method will help to clarify various astronomical phenomena in the future.”

The Sun is a single star, but the Universe is full of binary stars, which are two stars orbiting each other. During its youth, each young star in a binary system is surrounded by a protoplanetary disk composed of molecular gas and dust. This disk is known to be the site of planet formation. Many planets associated with binary stars have actually been detected, but how the disks are formed in binary star systems and how planets are formed in those systems is still a mystery.

“In order to study the formation of planets in binary star systems, it is important to accurately determine the orbital motion of the two stars and the tilt of the individual protoplanetary disks,” explains Shigehisa Takakuwa, a professor at Kagoshima University.

Researchers have suggested two formation mechanisms for binary systems; one is a breakup of a single large gaseous disk, and the other is fragmentation of the larger molecular cloud due to violent turbulence. In the former case, astronomers suppose that the orbit of the binary stars and the individual disks should be on the same plane. On the other hand, in the latter case, the orbital plane of the binary stars and the plane of the disks are expected to be different. This is a major issue that will affect the final orbits of the planets in binary systems.

The research team dug into the ALMA data archive and obtained the data for the young XZ Tau system taken in 2015, 2016, and 2017. They carefully analyzed the data and for the first time made an animation of the orbital motion of the binary stars, which shows that XZ Tau B moved 3.4 astronomical units (3.4 times the radius of Earth’s orbit) around XZ Tau A during these three years.

The team figured out the three-dimensional structure of the orbit. In addition, analyzing the doppler effect and the distribution of the radio waves from the disk around each star in the XZ Tau system, they found that those disks are significantly misaligned with respect to each other, and also not in the same plane as the binary orbit. 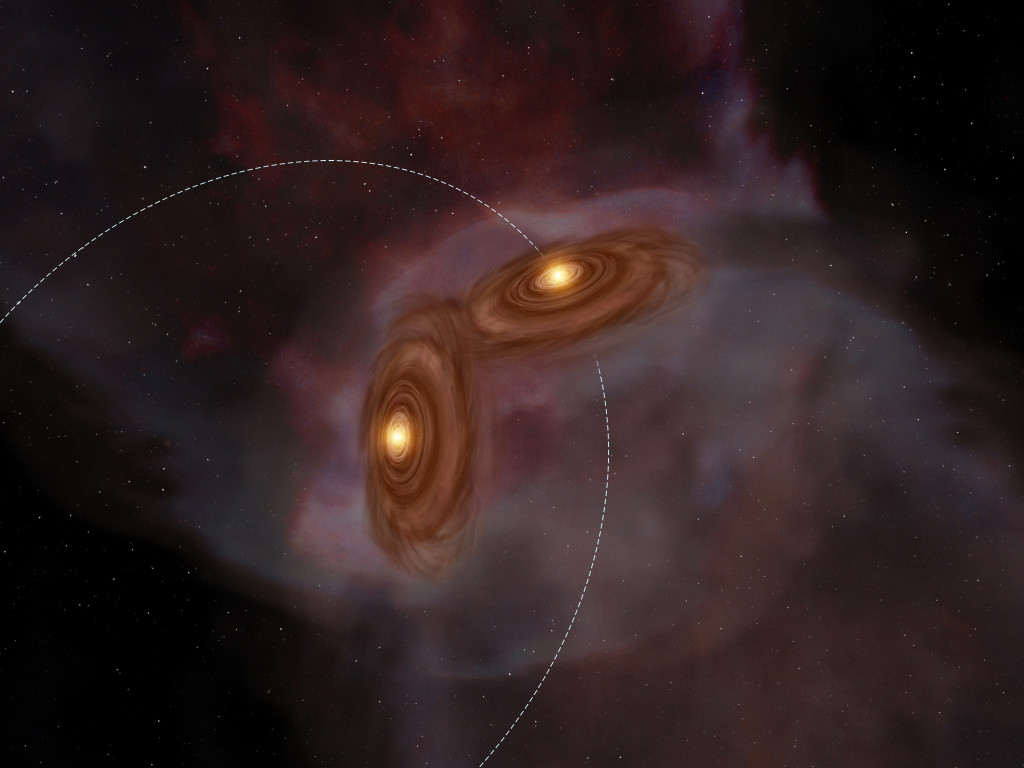 Artist’s impression of the young binary system XZ Tau. The two young stars in the system each have a protoplanetary disk around them that is tilted with respect to the other. The two young stars orbit in a plane different from that of either disk.
Credit: ALMA (ESO/NAOJ/NRAO)

Previous observations with ALMA had found examples of young binary stars with protoplanetary disks tilted with respect to each other (Note). However, this is the first time that the orbital motion of a binary system has been clarified, showing that the inclination is different from those of the circumstellar disks. These results support the idea that the XZ Tau system was formed via molecular cloud fragmentation.

“This is a beautiful example of utilizing the rich ALMA archive,” says Takakuwa. “The archive paves the way for young researchers to start conducting cutting-edge research right away.” It is true for this study. “I am very honored to contribute to such interesting research as an undergraduate student,” says Miyu Kido at Kagoshima University, the second author of the research paper. “I hope to use this experience in my own future research.”

Paper information
These observation results were published as Takanori Ichikawa, et al. “Misaligned Circumstellar Disks and Orbital Motion of the Young Binary XZ Tau” in the Astrophysical Journal on September 23, 2021.