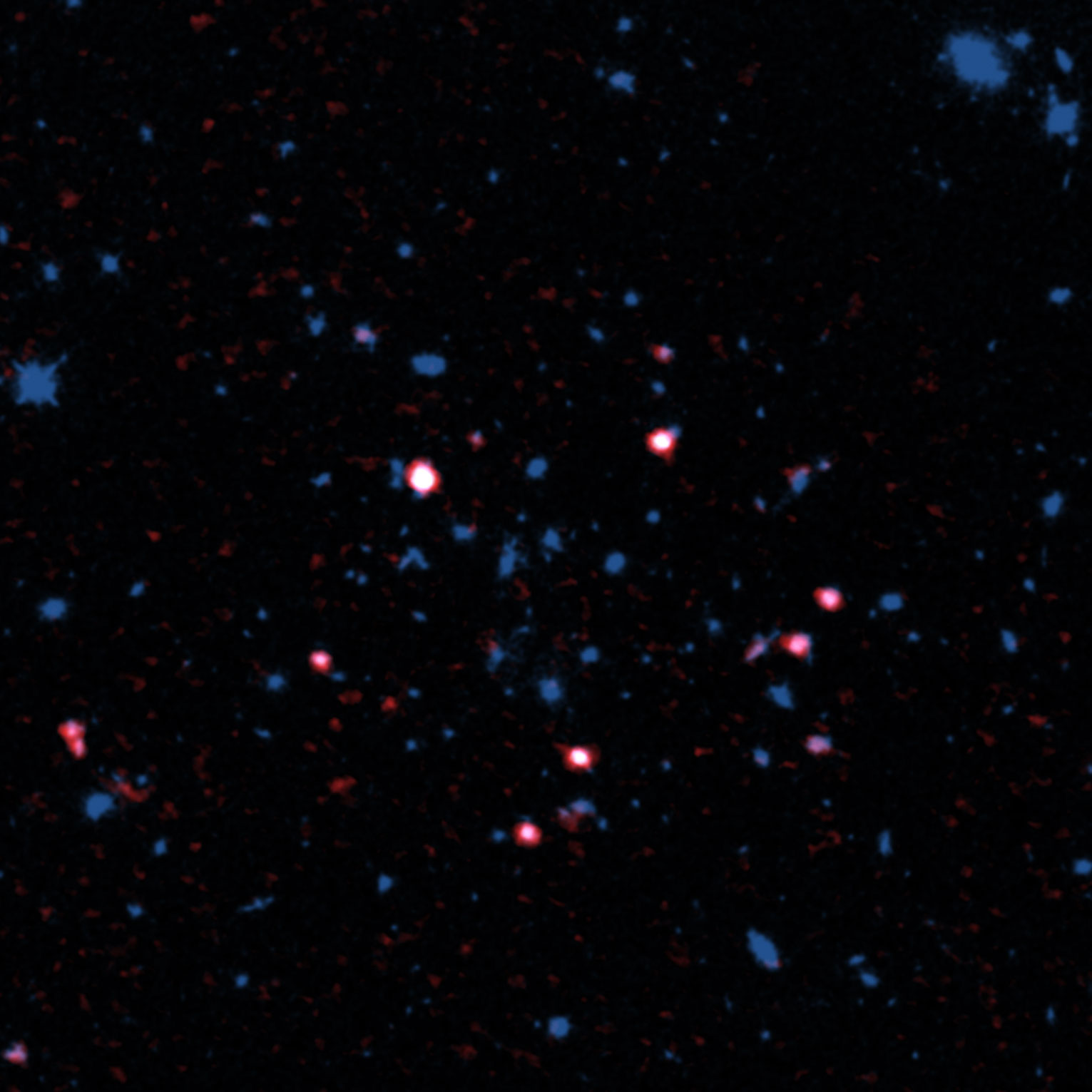 Astronomers observed a galaxy cluster 9.4 billion light-years away using the ALMA radio telescope array and found evidence that hot gas strips away the cold gas in the member galaxies. Since cold gas is the material for forming new stars, removing the cold gas inhibits star formation. This result is key to understanding the declining birthrate of stars throughout the history of the Universe and the evolutionary process of galaxy clusters. 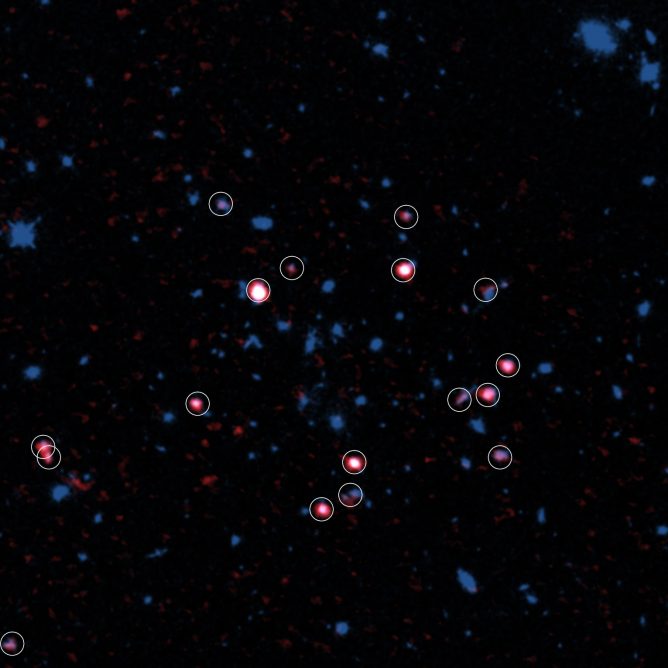 Galaxy cluster XMMXCS J2215.9–1738 observed with ALMA and the Hubble Space Telescope. Gas rich galaxies detected with ALMA are shown in red and marked with circles. Most gas rich galaxies are located in the outer part, not the center, of the galaxy cluster (around the center of the image).
The image without white circles
Credit: ALMA (ESO/NAOJ/NRAO), Hayashi et al., the NASA/ESA Hubble Space Telescope

Understanding the history of star formation in the Universe is a central theme in modern astronomy. Various observations have shown that the star formation activity has varied through the 13.8 billion-year history of the Universe. The stellar birthrate peaked around 10 billion years ago, and has declined steadily since then. However, the cause of the declining stellar birthrate is still not well understood.

“Aiming to investigate what suppresses the star formation activity, we focused on the environment around the galaxies,” said Masao Hayashi at the National Astronomical Observatory of Japan (NAOJ).

Hayashi and his colleagues observed the galaxy cluster XMMXCS J2215.9–1738 located 9.4 billion light-years away [1] The measured redshift of the galaxy cluster is z=1.46. A calculation based on the latest cosmological parameters measured with Planck (H0=67.3 km/s/Mpc, Ωm=0.315, Λ=0.685: Planck 2013 Results) yields the distance of 9.4 billion light-years. Please refer to “Expressing the distance to remote objects” for the details. with the Atacama Large Millimeter/submillimeter Array (ALMA). Because it takes time for the light from distant objects to reach us, observing far-away galaxies shows us what the Universe looked like when the light was emitted. In this case, the light from XMMXCS J2215.9-1738 was emitted 9.4 billion years ago, which is around the time that the stellar birthrate peaked. In fact, previous observations with NAOJ’s Subaru Telescope revealed that many of the galaxies in the cluster are actively forming stars.

ALMA detected radio signals emitted from carbon monoxide gas in 17 of the galaxies in the cluster. This is a record-high number for the detection of gas-rich galaxies at such a distance. Interestingly, the gas-rich galaxies detected with ALMA are located towards the outer part of the galaxy cluster, not in the center. This is the first time ever that such a location differentiation has been found in a galaxy cluster 10 billion light-years away.

The team assumes that the gas-rich galaxies detected with ALMA are in an intermediate step in the process of becoming members of the cluster. As new member galaxies pass through the hot gas filling the cluster, cold gas in the galaxies is stripped away by the hot gas. Active star formation consumes what little gas survives in the galaxies. As the cold gas needed to make stars runs out, star formation stops.

Actually, there are some galaxies with active star formation at the central part of the cluster. The team suggests that they are rather evolved, old members of the cluster consuming the last of their gas to form stars.

“Recent observational and theoretical studies show that the distribution of gas is key to understanding the evolution of galaxies,” explains Hayashi. “Our observations provide robust statistics showing that a number of gas-rich galaxies are located in the outer part of a galaxy cluster. With this result we have opened a future path for revealing the evolutionary process of galaxies in galaxy clusters.”

These observation results were published as Hayashi et al. “Evolutionary Phases of Gas-rich Galaxies in a Galaxy Cluster at z = 1.46” in the Astrophysical Journal Letters in May 2017.